Potential recipients (as listed on the Horbury Town Hall plaque).

It was reported in December 1899 that "about a dozen Horbury men had gone to the front" (Wakefield Herald, 16/12/1899). A plaque mounted inside Horbury Town Hall lists 29 men who served in South Africa (see below; no regiments given).

On Saturday evening the four Horbury Volunteers who have just returned from the seat of war were entertained to supper at the Cherry Tree Inn. About 20 sat down to the meal, which had been subscribed for by the company, and which was admirably served by the landlord, Mr Walter Beckett. Toasts to the Queen and then Volunteers were honoured amidst cheers. Subsequently the evening was spent in a convivial manner, songs being contributed by Privates R.E. PAYNE, W. HANSON, and S. MUSGRAVE (the latter singing “When we get to Bloemfontein”), Messrs J.A. Blackburn. J. Steele, H. Larder, and C. Payne. Mr H. Lonsdale accompanied the singing on the pianoforte. We should not omit to mention that the guests of the evening were Messrs R.E. PAYNE, S. MUSGRAVE, W. HANSON, and G. BLACKMORE.
Batley Reporter, 18th January 1901

To the Editor of “The Reporter”.

Dear Sir,
May I take the liberty of placing, through the columns of your paper, before the employers of labour in Dewsbury and Ossett district, the names of those men in the detachment under my command, who volunteered for service and proceeded to South Africa in February and May of last year, to join our 2nd Battalion on active service.
The firms by whom the men were employed up to the time of their departure for South Africa were all requested (in some cases personally) to keep, if possible, the Volunteers’ situations open for them until their return.

Unfortunately, in some cases, the employers have been unable to do so; but I feel sure that the latter will have no hesitation in giving satisfactory characters to any firms who might have vacancies for any of the Volunteers still out of work. Thanking you in anticipation, – I am, yours truly,

An interesting ceremony took place at the Horbury Conservative Club on Tuesday evening, when presentation to one of the members, Mr Charles Edward HARTLEY, who is leaving England for South Africa, to join Baden Powell’s Mounted Police, was made. The function took place in the billiard room, which was crowded with members. Mr E. Poppleton, on behalf of the members, presented Mr HARTLEY with a pair of field glasses and a pocket knife, the case of the field glasses bearing the following inscription: – “Presented by the members of the Horbury Conservative Club to Mr Charles Edward HARTLEY, on his departing to join Baden Powell’s Mounted Police, February 12, 1901”. Mr B. Wilson also made a few remarks, and Mr HARTLEY expressed his thanks to the members for their gift. Subsequently a most enjoyable smoking concert was held, when songs, recitations, etc., were given by Professor Harris, of Leeds; songs by Messrs A. Rhodes, M. Rigg, D. Dews, and C. Widdop; and quartettes by Messrs W.H. Giggle, G. Hunt, M. Rigg, and J. Woffenden. Mr HARTLEY left Horbury on Thursday, and sailed from Southampton yesterday (Friday).
Batley Reporter, 8th March 1901

LOCAL VOLUNTEERS FOR THE FRONT.

Members of the “G” (Ossett) Company of Volunteers who are going to South Africa were entertained to dinner by the local Send-off Committee on Saturday evening at the Coopers Arms, where a well-prepared meal was served by the landlady, Mrs Hawes …….

The Secretary then handed to each of the men a parcel containing pipes, tobacco, writing materials, etc., the names being as follows: – Corporal JESSOP; Privates MITCHELL, GOODARE, SPENCER, AUTY, WESTWOOD, HINCHLIFFE, GOMERSAL, HAIGH, MORTON, PHILLIPS, THEWLIS, and ISAACS. The last two were absent, THEWLIS through a family bereavement, and ISAACS on account of sickness. 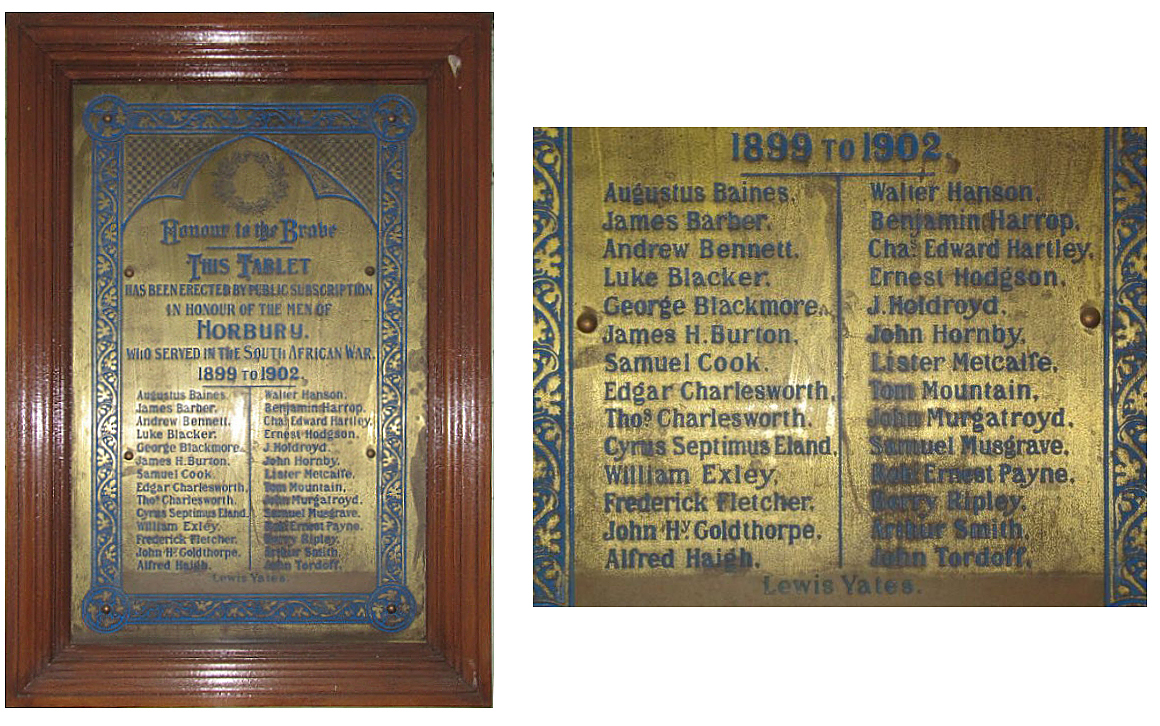