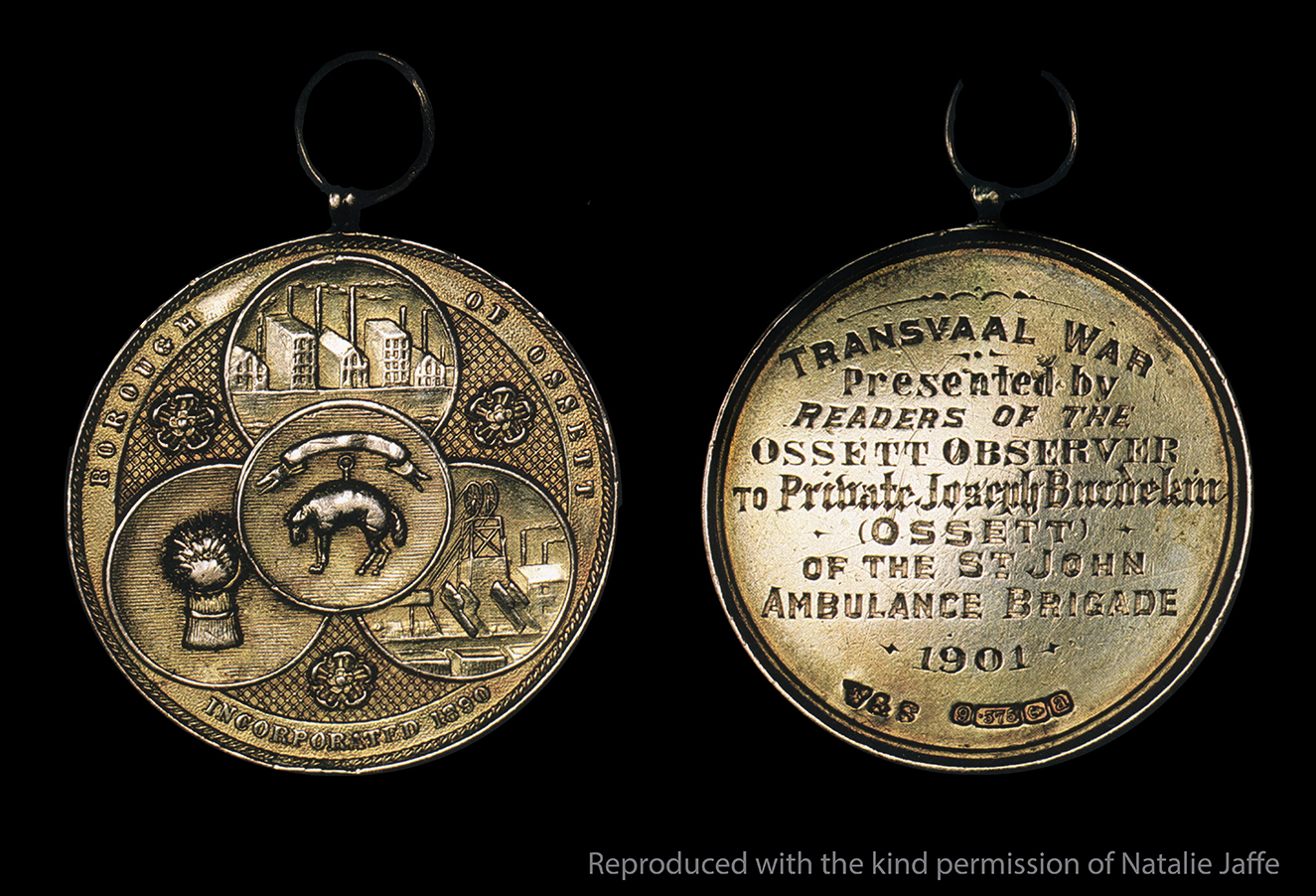 Note: this list includes men from Horbury, a town that issued its own medal. Despite belonging to the Ossett Company, the five Horbury men may not have received Ossett medals.

Presentation made by the Mayor (Councillor W. Townend), in the Market Place, Ossett.

Note: this list includes Private Haigh of Horbury, a town that issued its own medal. Despite belonging to the Ossett Company, Haigh may not have received an Ossett medal.

"The Welcome Home Committee have arranged that the men shall be presented with gold medals, like their comrades of the first active service company, and they are also to be entertained at a banquet" (Batley News, 28/06/1902).

Obverse with the civic arms of Ossett: "BOROUGH OF OSSETT / INCORPORATED 1890".

"The medals are of 9-carat gold, about the size of a half-crown, the Borough arms being on one side, and a suitable inscription on the other" (Batley Reporter, 24/05/1901).

The Ossett Observer also insured every volunteer for £250.
Burdekin example illustrated in Hibbard. 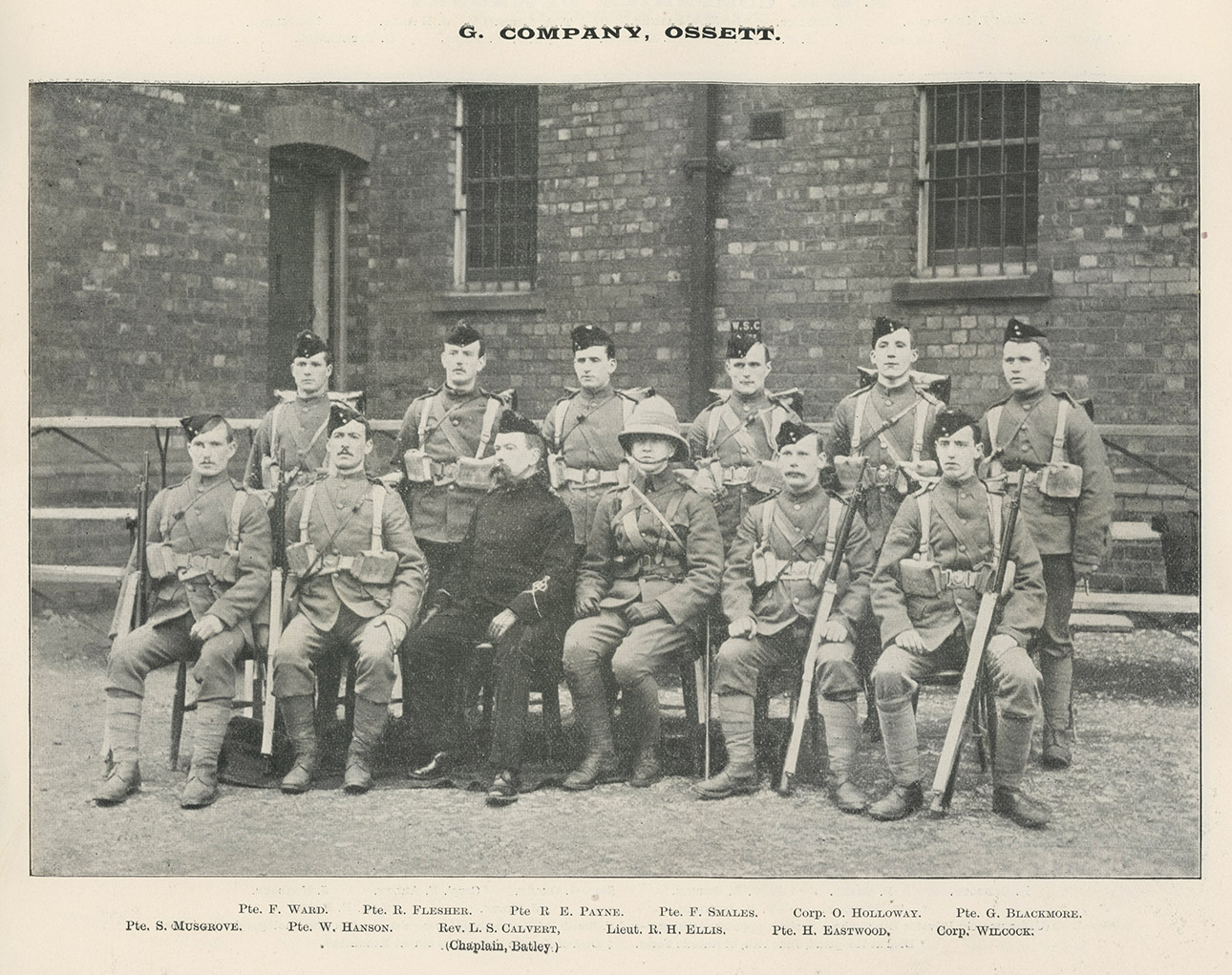 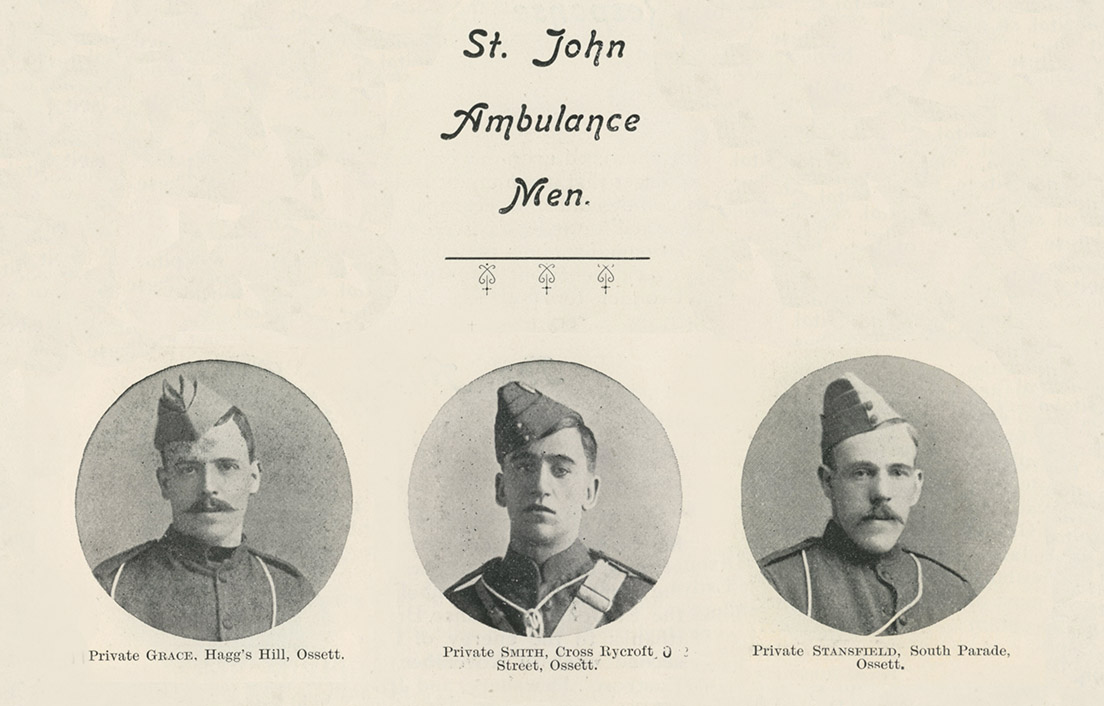 To the Editor of “The Reporter”.

Dear Sir,
May I take the liberty of placing, through the columns of your paper, before the employers of labour in Dewsbury and Ossett district, the names of those men in the detachment under my command, who volunteered for service and proceeded to South Africa in February and May of last year, to join our 2nd Battalion on active service.
The firms by whom the men were employed up to the time of their departure for South Africa were all requested (in some cases personally) to keep, if possible, the Volunteers’ situations open for them until their return.

Unfortunately, in some cases, the employers have been unable to do so; but I feel sure that the latter will have no hesitation in giving satisfactory characters to any firms who might have vacancies for any of the Volunteers still out of work. Thanking you in anticipation, – I am, yours truly,

LOCAL VOLUNTEERS FOR THE FRONT.

Members of the “G” (Ossett) Company of Volunteers who are going to South Africa were entertained to dinner by the local Send-off Committee on Saturday evening at the Coopers Arms, where a well-prepared meal was served by the landlady, Mrs Hawes …….

The Secretary then handed to each of the men a parcel containing pipes, tobacco, writing materials, etc., the names being as follows: – Corporal JESSOP; Privates MITCHELL, GOODARE, SPENCER, AUTY, WESTWOOD, HINCHLIFFE, GOMERSAL, HAIGH, MORTON, PHILLIPS, THEWLIS, and ISAACS. The last two were absent, THEWLIS through a family bereavement, and ISAACS on account of sickness.
Batley Reporter, 24th May 1901

The G (Ossett) Company of the 1st V.B. King’s Own Yorkshire Light Infantry are to attend Holy Trinity Church on Sunday, June 2nd, accompanied by the battalion band. After the service, the Mayor of Ossett (Councillor W. Townend) will present the gold medals subscribed by Ossettonians for the local volunteers and ambulance men who went out to South Africa on active service last year. Weather permitting, the presentation will be made in the Market Place. The medals are of 9-carat gold, about the size of a half-crown, the Borough arms being on one side, and a suitable inscription on the other.
Yorkshire Evening Post, 24th February 1902

A TOUCHING INCIDENT AT DEWSBURY.

At Dewsbury on Saturday war medals were presented to the local ambulance men who had served in South Africa. One of the men, Private R. GRACE (Ossett), died whilst on service, and the medal was given to his little son, who was carried on to the platform by his mother – an incident which touched many of those present.
Batley Reporter, 28th February 1902
The following is a list of members of the Dewsbury Corps [of the St John Ambulance Brigade] who have served in South Africa and to whom [war] medals have been awarded: – Ossett Division: Privates J. BURDEKIN, J. LONG, M. SMITH, R. GRACE, J.W. STANSFIELD.
Batley News, 28th June 1902

Reception of the Ossett Men.

Ossett people were in a high state of enthusiasm on Monday evening, in fact it might have been a second peace rejoicing. The exuberance of their spirits was of course accounted for by the return home of twelve of the Ossett Volunteers, who left for active service in South Africa about fifteen months ago. A huge crowd assembled at the station soon after seven o’clock in the evening, and the street was thickly lined with people all the way to the Market Place. The men arrived by the 7.45 train from Wakefield, and were met by the Mayor (Mr W. Townend), Alderman J. Fox (Deputy-Mayor), Councillors Taylor and Stead, Mr W. Brook (Town Clerk), and the members of the Welcome Home Committee; and accorded them a thoroughly hearty reception. The Ossett Borough Brass Band played patriotic music, and the khaki clad heroes were escorted from the railway station to the Market Place by their comrades of the Ossett Company, where short congratulatory addresses were delivered by the Mayor, Deputy-Mayor, and Mr Eli Townend. Captain Chadwick, who is in command of the Ossett Company, made a few remarks on behalf of the men, and intimated that they had all rejoined the G Company of the 1st Batt. K.O.Y.L.I. – an announcement that was received with cheers. On reaching the Armoury the men were dismissed, and afterwards escorted by the Band to their respective homes. The Welcome Home Committee have arranged that the men shall be presented with gold medals, like their comrades of the first active service company, and they are also to be entertained at a banquet. A meeting was to have been held at the Cooper’s Arms on Tuesday evening, to arrange a date and programme, but as there was not a very large attendance, it was postponed until next Wednesday. 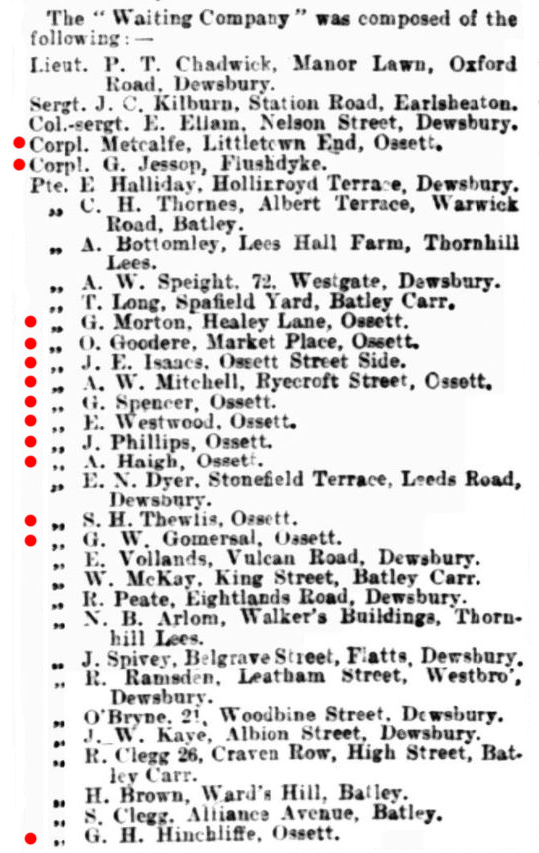