Presentation made by the Mayor (Mr G. Beringer), in the Guildhall, Helston.

The volunteers were also presented with oak-framed illuminated copies of the brass tablet erected in the Guildhall (on vellum).

The Mayor stated that the gold medals and illuminated addresses to be given to the returned South African volunteers will shortly be distributed. A brass tablet, with their names inscribed thereon, will be placed in the end wall of the Guildhall, and to the right of the Mayor’s chair.
Royal Cornwall Gazette, 10th October 1901

PRESENTATION TO THE HELSTON VOLUNTEERS.

The presentation to the nine Helston Volunteers who returned some months since from South Africa was made on Thursday evening in the Guildhall by the Mayor (Mr G. Beringer). He was supported by Canon Tyacke, the Rev. W.H. Kaye, Mr R.G. Rows, Capt. Pengilly, Messrs E.P. Kendall, J. James, F.W. Jeffery, J. Toy, and J.W. Tyacke (Town Clerk). The first ceremony was the unveiling of the memorial tablet fixed in the wall of the Guildhall to the right of the Mayor’s chair, and erected to commemorate the services of the men belonging to the Volunteer Company who served at the front in South Africa.

The Mayor expressed his pleasure at being present to do honour to their noble young Volunteers. The service rendered by the Volunteers rebounded to the honour and credit of their little town. They went to South Africa with their lives in their hands, prepared, come life or death, to serve their country to the best of their ability, and such bravery and chivalry were worthy of their esteem. There was no lack of money, and more might have been had if required to show their appreciation of their patriotism (cheers). The Mayor then unveiled the tablet, which was brass on a marble background, an artistic piece of work, and much admired. The inscription was as follows: – “This tablet is erected to commemorate the patriotic action of nine men of the Helston Volunteer Company, whose names are engraved below, who served their country in the South African war, 1900-1, and also to recognise the loyal offer of twenty-three other men of the same company who volunteered for the front”. Then came the names: – Corp. Albert THOMAS, Bugler William F. LANDER, Privates George CHISWELL, Edward EVA, William PERRING, John M. ROSEWARNE, Frederick M. ROWE, Albert F. STAPLE, and Francis J. STAPLE. Each Volunteer was then presented with an address on vellum and a gold medal.
The Cornishman, 10th October 1901

There was little excitement manifested in the final honour paid to Helston’s South African volunteers – the unveiling of a brass inscribed tablet on the Guildhall wall to the right of the Mayoral chair, the presentation of an illuminated framed copy together with a gold medal to each of the members of the service company of the Helston corps, as follows: – Corporal A. THOMAS, Privates G. CHISWELL, A. EVA, W.J. PERRING, A.F. STAPLE, F.J. STAPLE, F.M. ROWE, J. ROSEWARNE, and Bugler W. LANDER.

The Mayor, Mr G. Beringer, who made the presentation, was supported by the Rev. Canon Tyacke, Rev. W.H. Kay (U.M.F.C.), Messrs R.G. Rowe, J.P., and E.P. Kendall, J.P., Councillors J. James, F.W. Jeffery and J. Toy, Mr J.W. Tyacke, town clerk, and Capt. A. Pengilly, D.C., D.C.L.I.  Several ladies were present on the benches surrounding the civic chair, and also in the hall. The volunteer corps were lined up at the sides of the room. The tablet was covered with a Union Jack, and at the request of Mr J.W. Tyacke, secretary of the committee, the Mayor unveiled it, after making a few remarks relating to the war and their desire to do honour to the brave volunteers. Following this the presentations of the vellum scroll and gold medal were made. Rev. Canon Tyacke spoke to them as dear Helston boys, brave hearts, who had done all they could, which he hoped would be an earnest of what is to be done in the future. This should be their text – “Go on in the path of what’s right”. The tablet would be a hint to all to remember their bravery.

Mr R.G. Rowe said no question affected his mind as did the war, and the present crisis would teach the nations a lesson of what modern warfare means, and he hoped they would learn from it. He feelingly referred to the deaths of so many brave soldiers and to the loss to many homes, to the mourning of sisters, widows, and orphans, and said this epitaph, “They died for us”. He honoured the young men of the town, and stood there to bear testimony to their heroic conduct.

Capt. Pengilly alluded to the number of men of the company who offered themselves when the call came – within 24 hours 23 names were handed in; and then when the second call came for men to relieve those who had been away for 12 months – nine volunteered. The heroism and patriotism of the men who were accepted was so great that they could not do enough for them.

Private F. ROWE responded for the volunteers. He thanked them all for the kindness that had been shown. What he received when he came home and them was quite unexpected. Theirs was a great experience in South Africa, an experience he would not have missed, and he could say that of all the others as well. Their motto was “One-and-all”, and all the company were “One-and-all”. When they came to the regiment they were treated very kindly by all, and the colonel treated them well also.

Councillors James and Toy proposed a vote of thanks to the mayor and the committee, which was heartily carried, and the proceedings terminated with the singing of the National anthem.
Volunteer Service Gazette, 11th October 1901

On Thursday evening, Oct. 3, a memorial tablet to commemorate the services of the nine members of the Helston Volunteer Company who served at the Front in the South African War, was unveiled, and the presentation to the men of the addresses on vellum and gold medals, took place in the Guildhall, Helston. The Mayor (Mr G. Beringer), wearing his robes and chain of office, presided. The Volunteer Company, in uniform, lined each side of the hall, and seats were reserved for the recipients below the Mayor.

The Mayor, on being called on by the Town Clerk, who was the Secretary of the Subscription Committee, to unveil the Tablet and make the presentations, said about eighteen months ago their nine young Volunteers whom they were met to honour that evening left home and country to brave the dangers and hardships of war. The war had commenced some months before, and much to their regret was still going on. As far as we could see it might be some time before it was brought to a successful issue – there could be but one issue to the contest. We might have lost prestige in the eyes of some of the Continental nations by the long and prolonged resistance of the Boers, and the reverses our arms had occasionally met with. He believed that if this country had put forth its might in a way it might have done the war would have been ended by now, and many precious lives saved and much misery prevented. It behoved the people to support the Government to bring the war to a successful issue. We desired peace, liberty, and freedom not only for ourselves, but for all under the British flag. The service rendered by the Volunteers redounded to the honour and credit of their little town. With their lives in their hands their young men went out prepared, come life or death, to do their best at all risks. Such bravery and chivalry were worthy of their highest admiration. There were plenty of means, and they could have had more money if required for this desirable object.

“This Tablet is erected to commemorate the patriotic action of 9 men of the Helston Volunteer Company, whose names are engraved below, who served their country in the South African War, 1900-1, and also to recognise the loyal offer of 23 other men of the same Company who volunteered for the Front”.

Then followed the names: Corpl. A. THOMAS, Bugler William F. LANDER, Privates George CHISWELL, Edward EVA, William PERRING, John M. ROSEWARNE, Frederick M. ROWE, Albert F. STAPLE, and Francis J. STAPLE. The addresses on vellum – a very artistic piece of work, framed in oak and gilt – and the gold medals were then presented to the men. Each man as he stood up to receive them was loudly cheered.

The Rev. Canon Tyacke, who was then called on by the Mayor to speak, said the old poet of the most martial nation of the world had said that it was a pleasant and honourable thing to die for one’s country. It was through no fault of the Helston Volunteers that they had not lost their lives. They went cheerfully and willingly wherever they were bidden, and they at home were only too glad that glory of dying was denied them. Let them all go on as well as they had begun, and, guided by the same honourable conduct, their future lives could not help being worthy of the respect and esteem of all good men. They at home knew from the commanding officers that none of the men misbehaved themselves in that distant land, and that their officers had nothing but words of commendation to speak of them. As long as they were spared with hearts and eyes to feel and see they would look on them with admiration for their noble conduct. Then let them live up to what they had been, and god’s blessing would rest upon them, and it would be an incentive to others to follow their example. This was the first time in the history of their borough that such a patriotic action as theirs had been done; it was something for them to be proud of, and he hoped their lives would be worthy of it.

Capt. Pengilly, 1st V.B. the Duke of Cornwall’s Light Infantry, responded for the Volunteers. He remarked that when the call for duty came, that branch of the Service to which he was proud to belong responded nobly, and Helston Company took a foremost place in the number who volunteered for the arduous duties of a war campaign. The Volunteers went out to the war with their lives in their hands, and faced the same dangers and privations as the Regular force, and in no sense were they behind the soldiers in doing all the duty required of them, and it was not their fault that the campaign was not yet over. If not in the fighting line, the Volunteers were as much exposed as the others to the Mauser bullets in protecting the convoys which were needed for the existence of the Army, and they deserved the highest praise of their country for the brave way they discharged their duty. It was a very fortunate thing that they all returned safe and sound. He was proud to say that 23 of his company volunteered for the Front, and nine offered to relieve those who had returned. We could not do enough in recognising what they had done, and their brave and patriotic action would stand them in good stead in the future.

Pte. F.M. ROWE also spoke, and on the proposition of Mr James, seconded by Mr J. Toy, a vote of thanks was heartily accorded the Mayor. 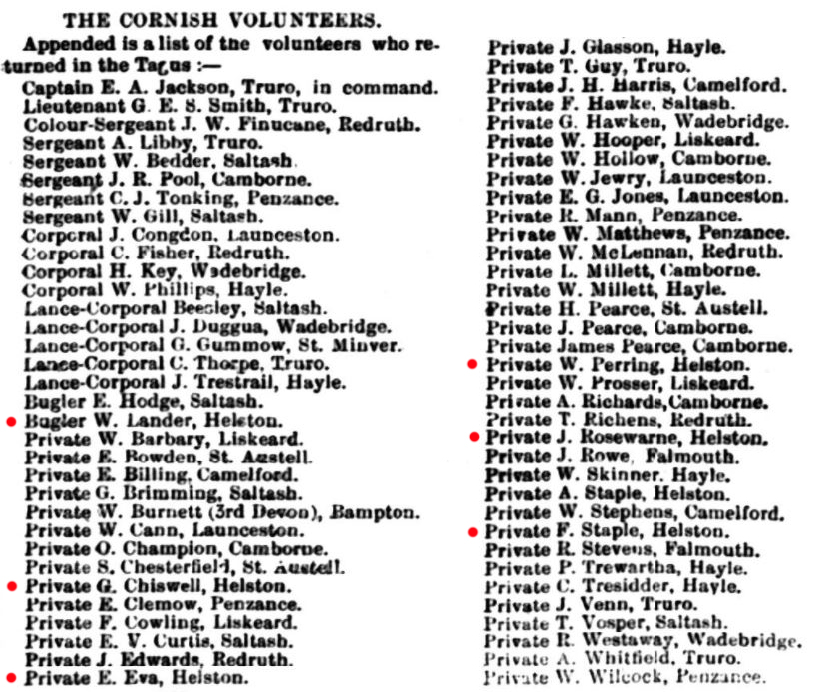