Send-Off to the Helensburgh Volunteers.

On the invitation of the Provost and Magistrates of the burgh, a number of gentleman assembled in the Council Chambers last night to bid goodbye to the men who have volunteered for the front. The young men present were – Sergeant PORTER, Privates SWEENEY, McKINLAY, and ALEXANDER, members of A Company 1st D.R.V., but who are now in the Argyll and Sutherland Highlanders; Sergeant-Farrier NEILSON, Farrier McBRYDE, Troopers HAMILTON, McCULLOCH, and McMILLAN, who have been accepted in the Glasgow Queen’s Own Yeomanry. Troopers GELLATT [sic], BLACK and McGREGOR, of the same regiment, and P. McDOUGALL, of the Royal Horse Artillery, were unable to be present. Provost Anderson presided, and in fitting terms wished the men God-speed in their work. Each man was afterwards presented with a silver medal, bearing on the one side his name and on the other the words, “Burgh of Helensburgh; Transvaal War, 1900”. Very hearty cheers were given for the young soldiers. Patriotic and suitable speeches were delivered by Bailies Bryden and Maclachlan, Revs. W. Leitch and J.G. Christie, Colonels R. Easton Aitken and Douglas Reid, ex-Bailies McCulloch, Easton, and Duncan, and ex-Provost Stuart. The Rev. A.C. Welch having commended the Volunteers to the Divine protection, the meeting sang the National Anthem, and afterwards gave very hearty cheers for the young Volunteers.
Helensburgh Advertiser, 4th January 2017 (presentation of carriage clocks on return)

When the Volunteers, Yeomanry and sharpshooters came back from the war — including Lance Corporal Stuart Black — they were given a reception in the Victoria Hall in June 1901 by the Provost, Colonel William Anderson, and the Magistrates, in the presence of the Lord Lieutenant of the County, Sir James Colquhoun.

Attending were most of the 22 who took part in the conflict, but some of them were still in South Africa.

A large gathering of local people attended the reception, and tea was served before the Provost, local dignitaries and the soldiers in uniform made their way to the stage.

The Provost said that they were met together representing the burgh and the neighbourhood to do honour to men who had done honour to themselves.

He said that after making allowances for the very natural taste youth had for adventure, he thought these men had been actuated by the best motives, the most patriotic motives possible, in offering themselves in a dark hour to give their services for their country and their Sovereign.

He said that the purpose of the reception was to express goodwill and gratitude for their actions, and to ask them to accept a token of their recognition of their services.

The Provost said that a carriage clock, a sample of which was on the platform, would be sent to each of them. In fact they were presented personally at a ceremony in the Municipal Buildings in November of that year.

Two Sergeants replied, and three cheers were given for those still in South Africa.

The clock was made to a special design by Messrs Elkington & Co. of London of oxidised silver and brass.

Above the dial is a reproduction of the burgh coat of arms, with South Africa and 1899-1901 on either side. At the foot of the dial is an Argyll and Sutherland Highlander, a field gun, and an Imperial Yeoman.

The inscription reads: “Presented to ………………………. in recognition of patriotic service in the South African Campaign — June 1901.”

In 2013 Helensburgh Heritage Trust, assisted by an anonymous benefactor, bought the clock presented to Private McKinlay, and it is currently one of a number of Trust items on display in Helensburgh and Lomond Civic Centre in East Clyde Street.

The clocks originally cost ten guineas each, and the total cost to Helensburgh Town Council was £261, including a plaque which was erected in the former Municipal Buildings. It is hoped also to display that plaque in the Civic Centre.

It contains 44 names, and it is likely that the second 22 served there in 1902 when the Boer were still conducting an effective guerrilla campaign, but did not receive clocks when they returned. 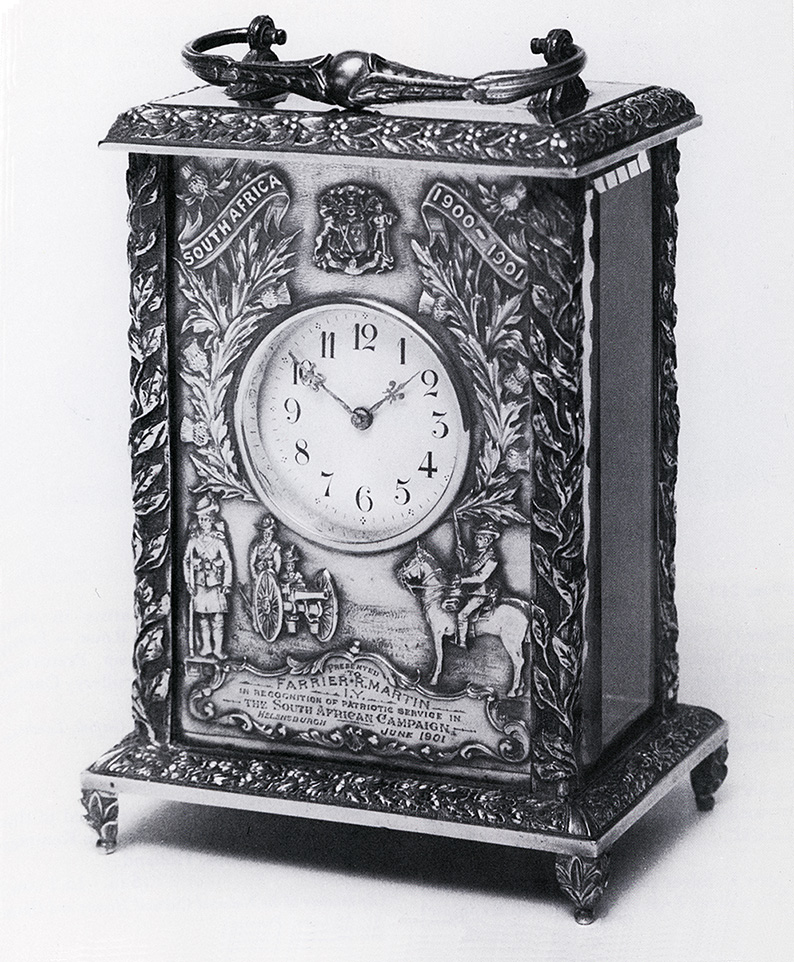 Carriage clock presented to Farrier Robert MARTIN. This example passed through Sotheby's, Johannesburg back in the 1980s, and is now held in the collection of the Museum Africa (formerly Africana Museum), Johannesburg.