Presentation made by Colonel Price, on behalf of Heidelberg residents.

A complimentary smoke night and presentation was, on Fiday evening last, tendered by the residents of the Heidelberg Shire to Captain MALCOLM, returned on furlough from active service in South Africa in the Oddfellows Hall, Heidelberg.

Cr. Alfred Ford, the President of the Shire, occupied the chair.

Prior to the commencement of proceedings the Heidelberg Brass Band, under the able baton of Mr Rawlins, played several appropriate selections in Cape-street.

The room was nicely draped with flags of the Empire and the stars and stripes of our transatlantic cousins. Tables, stocked with liquors and edibles, were arranged by Host Dawson a la cafe style. There were about 60 gentlemen present.

The first toast proposed was, that of "the 'King", and the first verse of the National Anthem was sung.

The President of the Heidelberg Branch of the A.N.A. (Mr John May) proposed "The Army", which he said was a democratic institution, and allowed men of merit to rise from the ranks to the highest positions. He instanced Hector MacDonald, and said Captain MALCOLM was endeavouring to follow the example set by that great soldier. Captain MALCOM was a private in the V.M.R. when he was accepted as a member of the first contingent, being subsequently created a corporal. In active service he had rapidly gained promotion to a captaincy.

Colonel Price responded. He was not only there to welcome a brave man, who had served under him, but as a former resident of Heidelberg, having resided at View Bank. He had been connected for years with the military, and had served with the Old Dublin Fusiliers. He would unhesitatingly say that here, in the colonies, were a fine race of men – with a finer race of men he never wished to serve. (Applause). They would go anywhere, do anything, dare anything. (Applause). They were solid chips of the good old block. (Cheers). He, however, regretted that a few of the men who had come back had maligned British officers, and had stated those gentlemen were prolonging the war for sordial considerations. He would call men who said such things dastardly liars. The ringleader of the mutineers was now a prisoner in the Deniliquin Gaol. It was a pity the death sentence passed on such men in South Africa had not been given effect to. It would have served them right. He (Col. Price) would have shot them. We did not want this class of man to go away only to come back and blackguard officers. These scallywags and scrimshankers traduced the men who were gallantly fighting for the grand old flag. As regards the men of the contingents he (Col. Price) had had with him in South Africa he was prepared to go back with them tomorrow and fight again. (Cheers). Perhaps some of those present imagined that Captain MALCOM would tell them of his exploits. He could guarantee that that gentleman would not do so. Brave men did not do that. They would not hear MALCOM talk about MALCOLM. No man blatherskited about what he did unless he was waster. He (Col. Price) knew what MALCOLM had done. He had seen Australians, and he had seen MALCOLM, under fire, with bullets and shells flying. The courage and behaviour of such men entitled them to be enrolled in any army in the world, (Cheers). The time was coming when Australia would make her mark. She would show the world that whoever strikes at the old woman – the old land – would strike at her. (Loud applause). When he was in South Africa, Boer women had said to him – "How far one Colonial comes to strike another Colonial". He had replied – "Anyone who strikes the Old motherland strikes Australia". (Cheers). They would fight to preserve the empire. Rather than see the old flag pulled down they would prefer to lose their own lives. (Great cheering).

The Chairman said the residents of the Shire wished to present to Captain MALCOM a large gold medal, and they would be pleased if Colonel Price would make the presentation on their behalf.

Colonel Price said they could not do him greater honor than ask him to present a testimonial to a brave man. MALCOM had enlisted as a private. When going through the medical examination it was found he had bumps on his toes – (laughter) – and he was very nearly thrown out. He (Col. Price) had, however, come to the rescue, and recommended that he be given another turn. The result was that he was accepted. (Laughter and applause). Captain MALCOLM possessed that magnetic influence which inspired confidence. The last he (Col. Price) had seen of him in South Africa was on the Bloemfontein Station waiting for his promotion to a captaincy. (Applause). He had justly earned his promotion, and was a credit to Australia and his (Col. Price's) own regiment. (Cheers).

Sergt. Major Fisher and Private Campbell, two members of the contingent who had served under Captain MALCOLM, testified as to the latter’s astuteness and bravery, and Campbell exclaimed – "We will follow Malcolm anywhere; if we die with him we will die like soldiers and like men". (Great cheers).

Captain MALCOLM thanked the people of Heidelberg from the bottom of his heart, and he hoped he might long be spared to live and wear the medal. He had got his chances while on active service, and had grasped them. Every man was not fortunate enough to get chances. Col. Price and Lieut.-Col. Reay had aided in his promotion. He could riot speak too highly of British officers. He had never seen one of them quail under the hottest fire. He related incidents of the war and created amusement by recounting the adventures of the Australians in action under Colonel Price when that gallant gentleman at a critical moment rallied them in his characteristic style, exclaiming above the din of battle – "Give the b_____ 's a volley, lads, and save the bally guns!" The guns were saved. (Great cheering).

The Rev. J.B. Rudduck proposed "Our Soldiers Abroad" in a vigorously-worded patriotic speech, in which he said Britons would gladly bear the hole cost of this war and more, rather than allow the dear old flag to lapse from the first to the second class. (Cheers).

Major Patterson responded, and said that in all gatherings of this kind there were many who had members of their own families on the veldt, and our soldiers had a kind remembrance in all patriotic hearts.

Most of the visitors left at ten o'clock in order to catch the 10.17 train, and were driven to the station by Mr A. Wilson. The President of the Shire (who, by the way, was suffering from pleurisy), also left at this stage, and the chair was taken by Cr. Davey, J.P.

Captain Ulbrick, and Captain Riddell made speeches, the latters being interspersed with humorous reminiscences of the war.

Mr Louis Amiet, who was acquainted with Mr and Mrs Malcolm at Greensborough, previous to the Captain leaving for the war made one of the most able speeches of the evening. He touched on the bull-dog pluck of our old Danish ancestors which was still an inherent quality in the British race.

The Rev. Duncan Fraser also made a capital stirring speech.

A splendid, musical and elocutionary programme was gone through, the speeches being agreeably interspersed with songs and recitations. Mr Sid. Smith, a professional artist, sang several comic and patriotic songs, and was loudly applauded, and encored repeatedly. Others who contributed were Lieut. Apps (recitation), Sergeant-Major Algie (song), Captain MALCOLM ("Home, sweet home – the song that lives for ever and aye"), Mr W. Hamilton (song), Dr Rollason and Mr John May (several songs). The accompanist was Mr Webster, of the "Curlews", Fitzroy, who played the "Soldiers of the King", and other patriotic selections when the toasts were being honored.

Before dispersing cheers were given for Colonel Price, Captain MALCOLM, Mrs Malcolm, and all the little Malcolms. Auld Lang Syne was sung by the company, but as enthusiasm was now running high the soldiers present continued proceedings with camp-fire songs, and the evening terminated amid a fervor of patriotism. 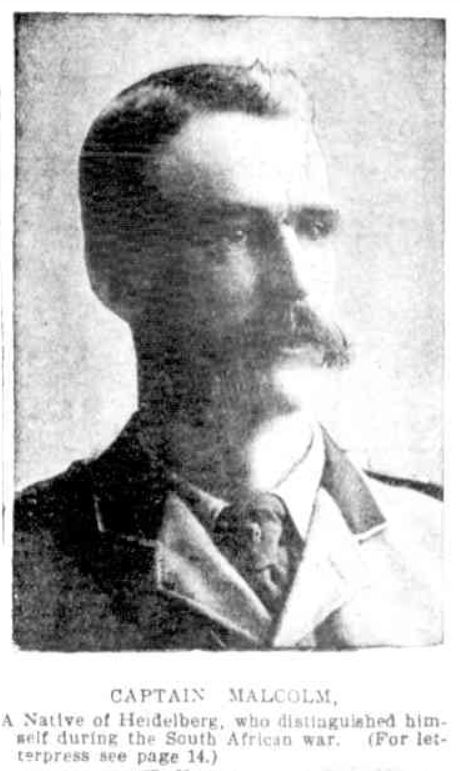