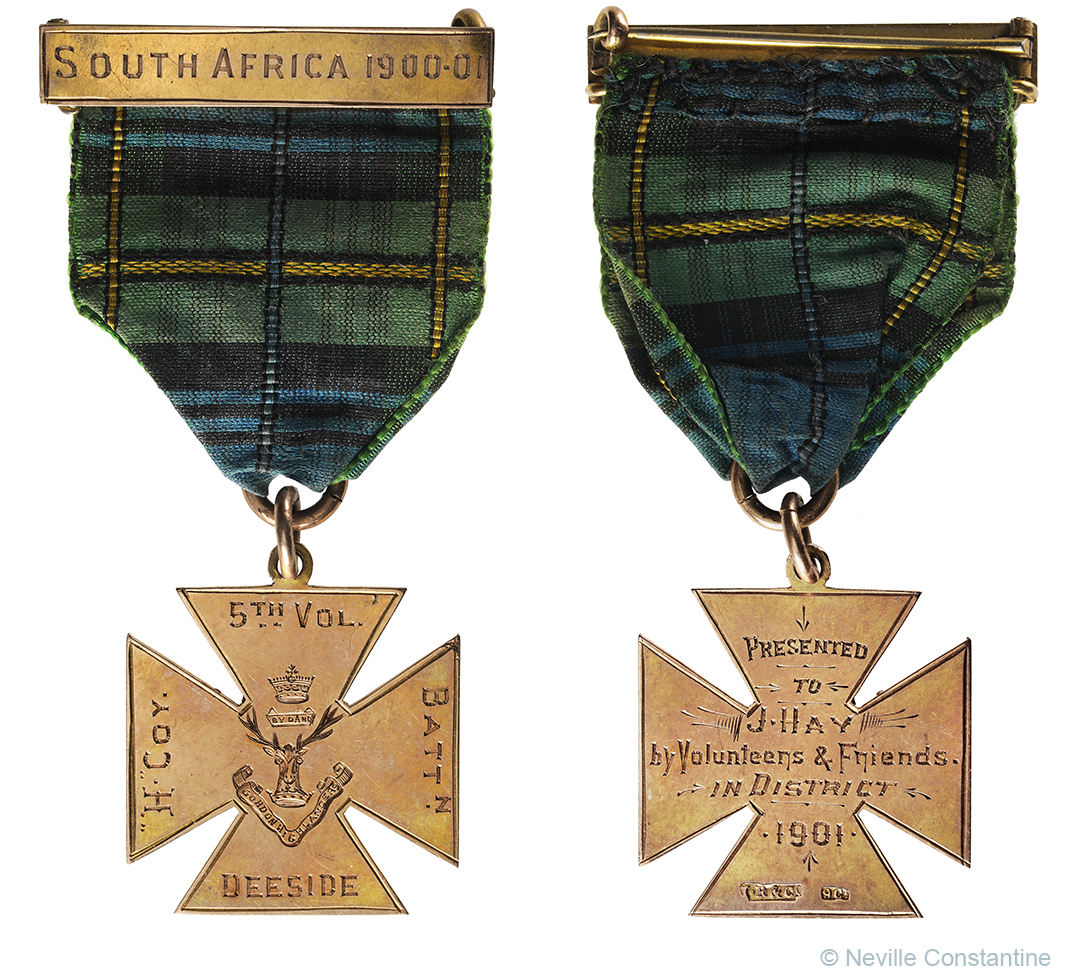 Each took the form of a Maltese Cross.

"They were designed by Colour-Sergt. Bailey, instructor at Tarland, and each is in the form of a Maltese cross, having on one side the crest of the Gordon Highlanders and the inscription, “5th Volunteer Battalion, H Company (Deeside)”, and on the reverse side there is engraved the name of the recipient and the words, “presented by volunteers and friends in the district”. The ribbon is of Gordon tartan, and on the bar is inscribed, “South Africa, 1900-01”. Mr P. Reid, Tarland, was entrusted with the work of making the medals, which he has skilfully carried out".

Medals designed by Colour-Sergeant Bailey and made by Mr P. Reid, Tarland.

SIR JOHN FARQUHARSON ON THE WAR.

When volunteers were asked for service in South Africa during the time that the heaviest of the fighting was proceeding, three members of H Company 5th V.B.G.H. (Tarland) joined the 2nd Service Company Gordon Highlanders, which was then being formed. During more than a year’s fighting which has intervened since then they have nobly done their duty, and what is gratifying to their comrades and the people of Tarland, they have all escaped from the risks of the field and the ravages of disease. Another volunteer – Corpl. W. DONALD, of H Company – joined the lately formed service company which went out to relieve their comrades and allow of their returning home.

Some time ago a movement was set on foot in Tarland for the purpose of showing the volunteers in a tangible form the pride which their comrades at home and the people of the village and district felt in them. Subscriptions poured in, and gold medals for each of those who had gone to the front were obtained. They were designed by Colour-Sergt. Bailey, instructor at Tarland, and each is in the form of a Maltese cross, having on one side the crest of the Gordon Highlanders and the inscription, “5th Volunteer Battalion, H Company (Deeside)”, and on the reverse side there is engraved the name of the recipient and the words, “presented by volunteers and friends in the district”. The ribbon is of Gordon tartan, and on the bar is inscribed, “South Africa, 1900-01”. Mr P. Reid, Tarland, was entrusted with the work of making the medals, which he has skilfully carried out. Of the three who first went to the seat of war, only Corporal John HAY and Private J.C. ILLINGWORTH returned home with those who arrived in Aberdeen on Tuesday, Private G. FYFE having elected to stay in South Africa with the Scottish Horse.

When Corporal HAY and Private ILLINGWORTH reached Tarland they received a most enthusiastic welcome, and on Friday they were entertained at a dinner and dance in the Cromar Hall. An excellent repast was purveyed by Miss Ferguson, Aberdeen Arms Hotel, Tarland.

Sir John Farquharson of Corrachree presided, on his right being Corporal HAY, and on his left Private ILLINGWORTH.

Rev. A. Mackenzie, Coull, gave the toast of “The Navy, Army, and Reserve Forces”.

Sir John Farquharson replied, and in proposing the next toast – “The Members of the 2nd Service Company” – he said the company ought to be very proud of the honour of serving their country. They had been members of a much larger and more important force than had ever before been sent out of this country. Another distinction which their guests had was that they had been engaged in a kind of fighting which would have been novel to any army. The beginning of the fight was a good fight, and the Boers certainly fought well. If the Boers had been good soldiers at attacking, Ladysmith, Mafeking, and Kimberley would probably have been taken; that was, if they could have attacked as our troops attacked. They (the Boers) however, fought well in defence, and down to September it was a fair fight. Since then it was simply a case of murdering our men from behind rocks. Unless the Government changed its lines, and gave the generals a free hand to execute Boers for murder, or to hang them as spies, he did not see how they were going to finish the war. It might drag out for another eight months, and add eighty millions of debt to that already incurred. They should follow the same lines as were followed in the American Civil War. Sherman gave fair warning that if the rebels continued fighting after it was useless, he would first confiscate property, and if that was not sufficient, he would hang and shoot. The result was that the South gave in, and the war was ended. It was really a much less cruel way. His friends, he was glad to think, had had much the better part of the fighting – in the real fight under Buller. (Applause). They all knew how the county regiment had come out of this campaign, with perhaps the most flying colours of any. He had pleasure in asking them to drink the toast. (Loud applause).

Corporal HAY, on behalf of his comrade and himself, returned sincere thanks for the kind and hospitable manner in which they had been entertained. They had done nothing to deserve it. They had only done their duty. They might, however, say that they volunteered because they considered their country was in danger. He could not describe the fights in which they had taken part, but they were very hard, and they were not more glad to see them (the volunteers) than they were to see Tarland. Many a night when they lay down on the veldt, cold and hungry, they had wished they were home again. They had done their duty, and that was all a man could do. (Applause).

Captain Howie spoke of the pride which he had in his men who had gone to the front, and, amidst great applause, presented the medals.

Colour-sergeant Bailey proposed the toast of “The Members of the Company still serving in South Africa”, and expressed the hope that, when the war was finished, the British public would not be “absent-minded beggars”, and forget those who had done their duty. (Applause).

The hall was afterwards cleared, and dancing engaged in, the masters of ceremonies being Messrs A. Fyfe and J. Taylor.