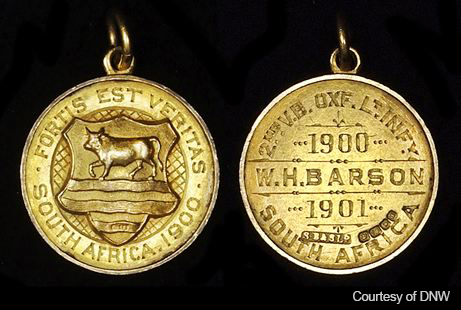 Gold medals, and silver matchboxes, to:

Presentation made by Colonel Hall, at Oxford Town Hall.

Obverse with the civic arms and motto of the City of Oxford: "FORTIS EST VERITAS / SOUTH AFRICA 1900".

Medals subscribed for by "members of the headquarter companies and the officers", 2nd Volunteer Battalion, Oxfordshire Light Infantry.

Matchboxes the gift of Councillor Zacharias.

The Times, 03/06/1901
Morning Post, 03/06/1901
Banbury Advertiser, 06/06/1901
Volunteer Service Gazette, 07/06/1901
Oxford Chronicle, 07/06/1901
Oxford Journal, 08/06/1901
Oxford Times, 08/06/1901
Bucks Herald, 08/06/1901
Buckingham Advertiser, 08/06/1901
Oxford Times, 29/06/1901
Oxford Journal, 29/06/1901
Spokes Symonds 2002
Dix Noonan Webb, 23/09/2011
________________________________________
Volunteer Service Gazette, 7th June 1901
OXFORDSHIRE LIGHT INFANTRY, 2ND V.B. – A public presentation of medals, subscribed for by the non-commissioned officers and friends of the City Companies to their comrades lately returned from South Africa took place in the Town Hall, Oxford, on Saturday afternoon, June 1. The recipients numbered just under 20. The galleries of the building were filled by the general public, and the floor was occupied by the officers and men of the City Companies. Great enthusiasm prevailed. The presentation was made by Col. Hall, commanding officer. He remarked that it was generally admitted the Volunteers who had taken part in the war had acquitted themselves very satisfactorily. The patriotism they had shown had advanced the Force in the estimation of the country. The Mayor of Oxford (Mr G.C. Druce) also spoke, and, in addressing the Volunteers who had recently returned from South Africa, said that the men would look back with pride to the fact that in the hour of need they did their duty and upheld the traditions of Oxford, which were traditions of loyalty and devotion to King and country. In the evening the members of the city companies dined together under the presidency of the Mayor.
Oxford Times, 8th June 1901

The City Volunteers had a busy and interesting day on Saturday, when there was a commanding officer’s parade and sham fight, followed by the presentation of gold medals to the members of the four Headquarters Companies recently returned from South Africa, and a complimentary dinner to the same men at night. …….

The force then left the Park, and marched to the Town Hall for the presentation of gold medals and silver match-boxes.

It was arranged that the presentation to the South African contingent of gold medals subscribed for by their comrades of the City Companies, and of silver match-boxes given by Councillor Zacharias should take place publicly ai the Town Hall at 4.30, and shortly after that hour the Volunteers returning from the operations at South Park marched into the hall, and were drawn up on the north and south sides, the band being at the west end, while “the lads in khaki” were seated on the platform. The galleries were filled with the general public, and previous to the presentation, which was made by Colonel Hall, a photograph of the scene was taken.

Colonel Hall said he had been asked by the officers, non-commissioned officers and men of the headquarters companies to present gold medals to the men of the city companies who had returned from South Africa – (applause). …….

In war, as they were aware, there were other things to contend against besides bullets; there was the wear and tear that the men had to go through, and he thought these men had earned considerable credit in going as they had done to South Africa. They were very glad that they had returned from the war and had not succumbed to that terrible scourge enteric. He had therefore much pleasure in presenting the medals, and he wished them every luck and happiness in the future – (applause). He had also much pleasure in handing to the men silver match-boxes presented to them by Councillor Zacharias, an old Volunteer, who was for many years in the regiment – (applause).

Colonel Hall then presented the medals and match-boxes to the following: – Corpl. BARSON, Lance-Corpl. BRIDGEWATER, Privates TYRRELL, ROGERS, PARSONS, WALTON, GOOD, MOLE, CRUMLEY, TAYLOR, and JENKINS. Corpl. BARSON also received a present of £5 from Colonel Dalzell, commanding the 1st Oxfordshire Light Infantry. Privates HARWOOD and RANDS, who belonged to the City companies, have not yet returned. …….

The Mayor concluded by thanking Col. Hall for distributing the medals and match-boxes.

Col. Hall, in acknowledgement, said that he was afraid he did not deserve the kind words spoken by the Mayor, but as long as he commanded the regiment he would always try to do what he could for it, and he hoped they might be successful in many contests.

The interesting proceedings then terminated, and the companies, headed by the band, returned to St Giles’ and were dismissed.