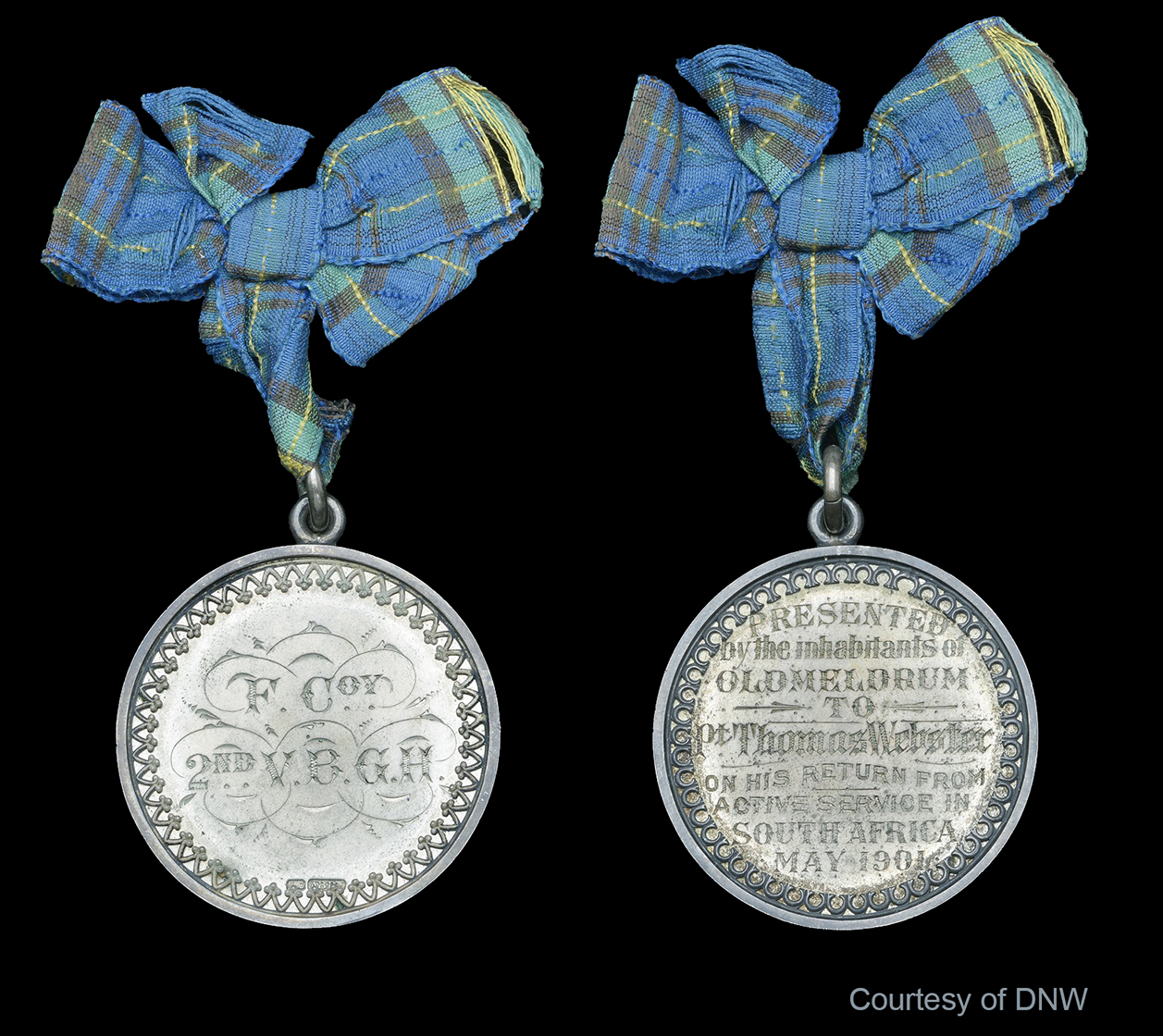 Presentation made by Provost Wilson, in front of the Town Hall, Oldmeldrum. 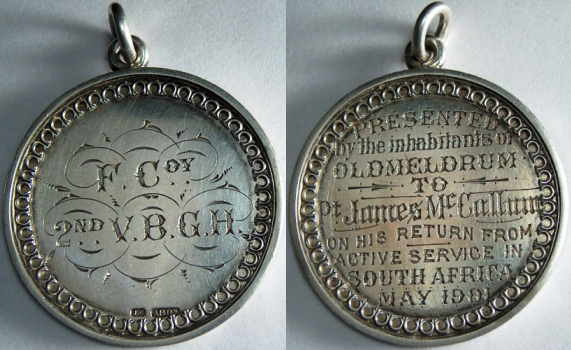 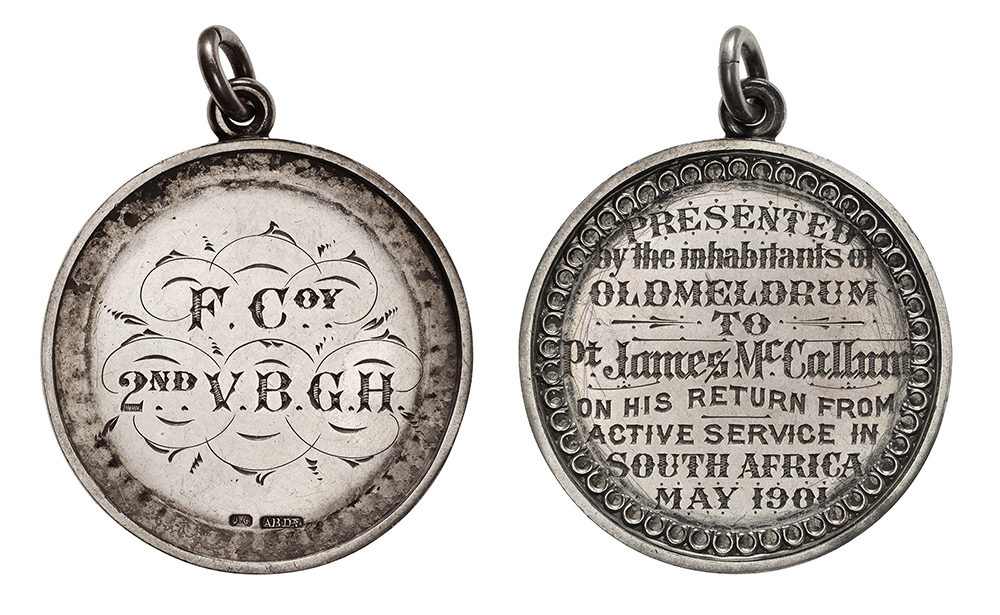 At the close of the service the volunteers marched down to the Square, where a presentation of silver medals was to be given to the South African heroes. The ceremony took place in front of the Town Hall. The whole Square was filled by people of the town and district. The men of the service company were in line in front of their comrades of F Company, and facing them were the provost and councillors, clergymen, and principal inhabitants.

Captain Baxter then called upon Provost Wilson to present the medals to the gallant fellows returned from South Africa, of whom they all felt proud. (Applause).

Provost Wilson said he felt highly honoured in being allowed to present these warriors from South Africa with some small recognition of the services they had rendered to their country in her hour of need. (Applause). Oldmeldrum took the proud pre-eminent position of having, in proportion to its population, furnished more volunteers than any other place in Aberdeenshire – he might almost say in Scotland – and they were very glad and very grateful indeed that night to think that all the nine men who went out some fifteen months ago have come back to them apparently looking sound and fit. Some of them had shed their blood for their country, but they rejoiced to see that some of it was still left in them. (Applause). They hoped the gallant fellows would be none the worse for what they had gone through after a short rest in their native place. He thought they would agree that their proceedings were fitly begun with the thanksgiving service in the church. They had thought it better that, instead of feasting these men, they should give them something that they could hand down as an heirloom to their successors to show that when their country needed their services they were ready to give them. He was sure he voiced the feelings of the inhabitants of Oldmeldrum and district when he said how very glad they were, and how grateful they were, to see them all back with them. They were all the more glad and grateful when they thought of the very many who proceeded to the scene in the beginning of the war, and who had not and would not return. They could assure these men that their thoughts had been with them during all the time of their absence. They had followed them from Bloemfontein to Johannesburg and Pretoria, and their only regret was that they did not get to Pretoria in time to catch old Kruger. (Laughter and applause). They made him, however, run, which was the next best thing.

The medals were then presented to Privates Robert INGRAM, Alexander NICOL, Thomas WEBSTER, J.A. GORDON, Forbes HALLIDAY, James McCALLUM, John MURCHIE, W, ERSKINE, and Andrew HALLIDAY. As the name of each man was called he came forward, and the provost pinned the medal to his breast. Privates WEBSTER and GORDON had been wounded, but both were looking well. The medals bore on one side – “Presented to Private _______ , by the inhabitants of Oldmeldrum, on his return from active service in South Africa. – May, 1901”. On the other side were the words, “F Company, 2nd V.B.G.H.”

On the call of Provost Wilson, three hearty ringing cheers were given to the returned heroes, followed by renewed cheering.

Rev. Marshall B. Lang, in a few sentences, returned thanks on behalf of the men who had been presented with the medals, and who heartily appreciated the gift and the cordiality of their reception. 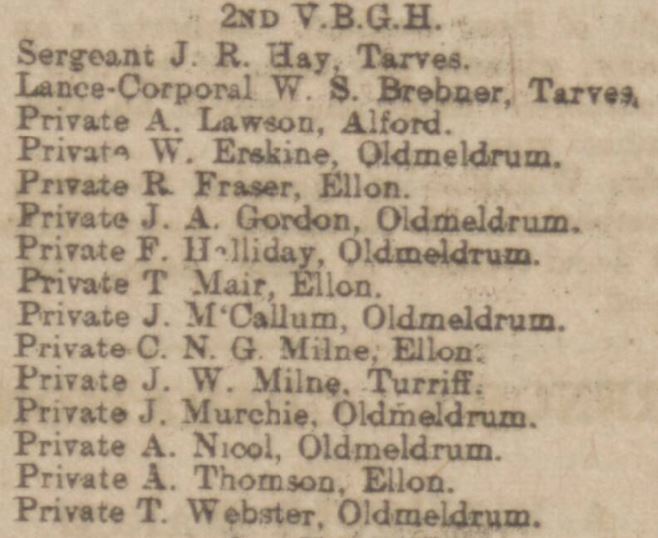