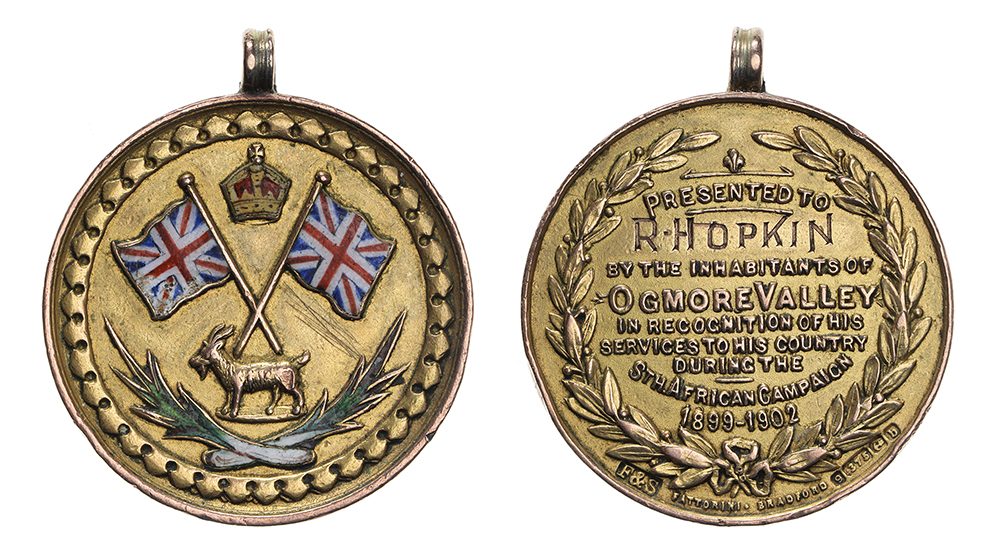 "The men from the valley who had been on active service in South Africa during the late war (and who numbered in all about 40) were each presented with a very handsome gold medal pendant" (Glamorgan Gazette, 20/06/1902).

The Ogmore Valley was the scene of an extraordinary outburst of jubilation on Saturday night last. The largest crowd ever seen in the valley awaited the arrival of the 8.20 passenger train at Ogmore Vale Station. Even the Mafeking celebrations were eclipsed. Four brass bands were in attendance: The Ogmore Valley Town Brass Band, the Nantymoel Temperance Band, the Ogmore Vale Brass Band, and the Ogmore Gospel Temperance Mission Band. As the train steamed into the station a tremendous cheer rent the air. The returned troopers were met on the station platform by Alderman Llewellyn, Mr John Williams, District Councillor Mr J. Ritson, Aber Colliery (president of the reception committee) Mr H.J. Brereton, and Mr D. Llewellyn, the honorary treasurer and secretary respectively. A brake was in waiting, and into this the returning troopers, together with four or five who had previously returned, managed to force their way through the cheering, pushing, scrambling, though withal good-tempered crowd. The horses were soon freed, and their places taken by a human team. A torch-light procession was formed, and Ogmore's “thin red line” taken in triumph around the valley. One of the Militiamen had a miraculous escape during the procession. A sudden lurch of the brake precipitated him into the road. By great good luck he sustained only a severe shaking and a few bruises. The names of the local members of the 3rd Welsh who returned are: - Sergeant D.J. THOMAS, Privates Geo. ISAAC, D.J. DAVIES, M. MORGAN, Alf. ("Taff") SMITH, S. QUANTICK. W. SHORT, W. LEIGHFIELD, Nantymoel; Privates John T. EVANS, J. BEYNON, R. HOPKINS, Dan THOMAS.
Glamorgan Gazette, 13th June 1902

On Saturday evening at the Workmen’s Hall, Ogmore Vale, the men from Ogmore Vale and Nantymoel who have been at the front in the recent war were presented with beautiful souvenirs in the form of gold pendants, suitably inscribed, as an appreciation of their services, by the inhabitants of the Valley. The hall was crowded, and Mr J. Ritson, the popular manager of the Aber Collieries, made an ideal chairman. Mr Ritson has been one of the prime movers in the matter, and with the genial secretary, Mr D. Llewellyn (solicitor), Gwalia House, who was one of the promoters, the proceedings throughout were an unqualified success. Mrs Dr D.J. Thomas, Nantymoel, made the presentations to the Nantymoel contingent and Mrs John Williams, Aberdare House, Ogmore Vale, to the Ogmore Vale contingent. We will publish the names of the recipients next week.
Glamorgan Gazette, 20th June 1902

A very interesting presentation took place at the Workmen’s Hall, Ogmore Vale, on Saturday evening, 7th inst., when the men from the valley who had been on active service in South Africa during the late war (and who numbered in all about 40) were each presented with a very handsome gold medal pendant as a recognition by the inhabitants of the valley of the gallant services rendered by them to their country.

The movement originated at the time of the return of the 3rd Welsh Regiment (Cardiff Militia) to this country from South Africa a few months ago, when it was thought that something ought to be done to give the men a hearty welcome on their return home. A committee was accordingly formed, with Mr J. Ritson, the popular manager of the Aber Collieries, as chairman; Mr H.J. Brereton as treasurer, and Mr D. Llewellyn, solicitor, as hon. secretary, to make the necessary arrangements.

The men were given a tremendous reception on their arrival home but the general opinion was that some memento of the war ought to be presented to each man.

Subscription lists were opened for this purpose, and a fund of over £50 collected. The committee decided that the most appropriate form of presentation would be a gold medal pendant with a suitable inscription engraved.

It had originally been intended that the presentation should be made on Coronation Day, but as a greater portion of the recipients had been called up to the camp for special training it was decided to make the presentation on the day named.

Although the meeting was called at very short notice there was a splendid attendance, and an excellent programme having been got up a very enjoyable evening was spent. The medals were presented by Mrs Thomas, Brynbedw, Nantymoel, and Mrs John Williams, Ogmore Vale, on behalf of the subscribers. 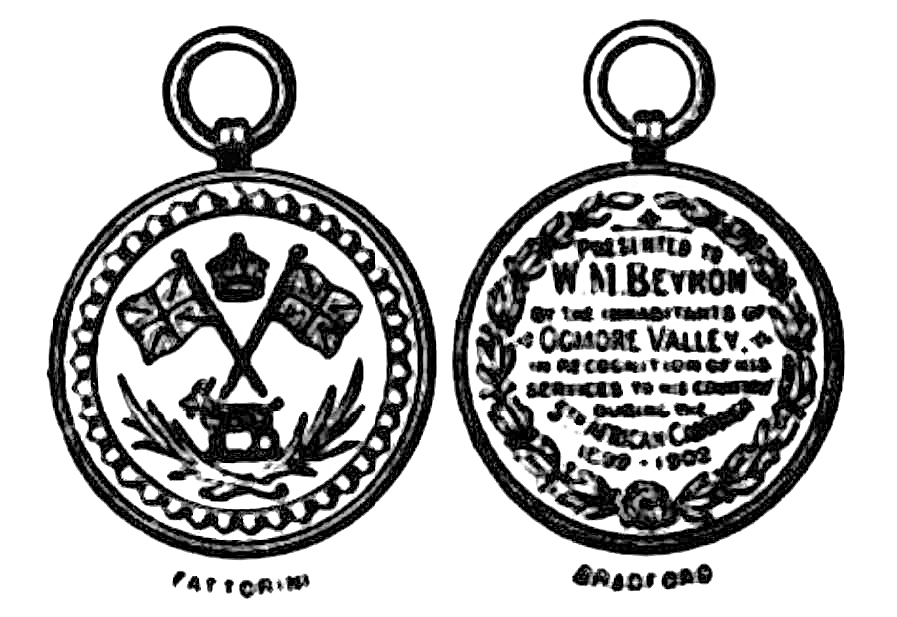 We give a diagram of the medal. As will be seen the medal is round, having no outer decoration, simply the suspending ring by which to connect it to a chain. It is massive gold. And has on the obverse two crossed Union Jacks portrayed in rich enamel in correct heraldic colour. The Tudor Crown above a goat beneath, and the leeks, form a tasteful and significant group, making its connection with the district and the purpose immediately recognisable, a conventionalised foliage giving a pleasing effect and finish. On the back is the following inscription: “Presented to (name) by the inhabitants of the Ogmore Valley in recognition of his services to his country during the South African Campaign 1899-1902”. A laurel wreath of victory borders this in relief.

The design and work is very creditable to Messrs Fattorini and Sons, of Bradford, who were entrusted with the work, and who, we understand, have just had their special Coronation medals accepted by Their Majesties the King and Queen and by His Royal Highness the Prince of Wales. 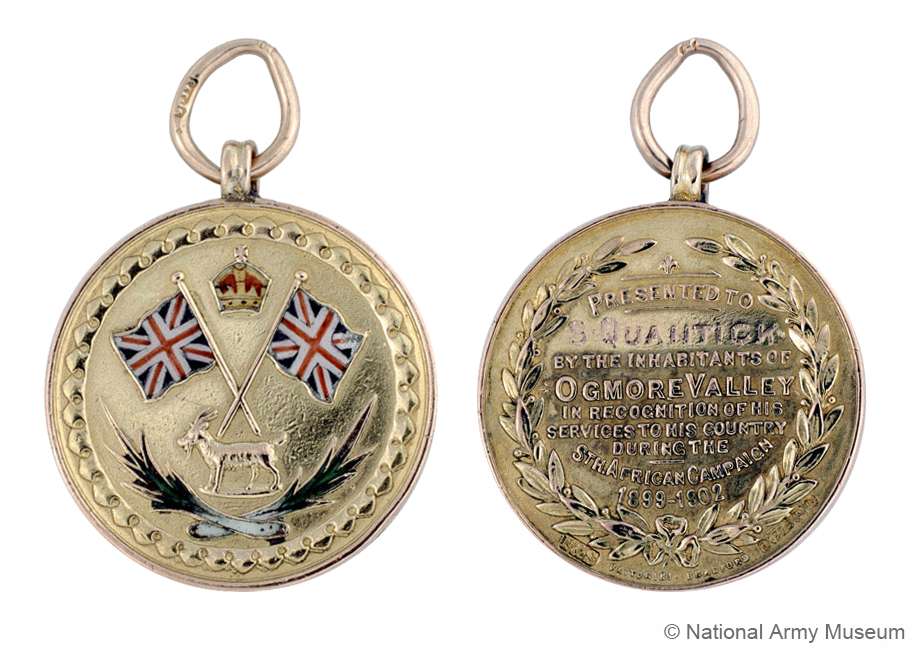