Type 2 (to Sister Wilson).
Inscribed: "Presented to Sister Esther H. Wilson, by the town of Huntly, in recognition of her services with the Army Nursing Service Reserve in South Africa, 1900-1901".
Note: the obverse of this medal appears to have been struck from the same die as that used for the Ordiquhill [Cornhill] tribute. The same may also be true of the Ythan Wells medal (unseen). Huntly, Cornhill & Ythan Wells are within 15 miles of one another. 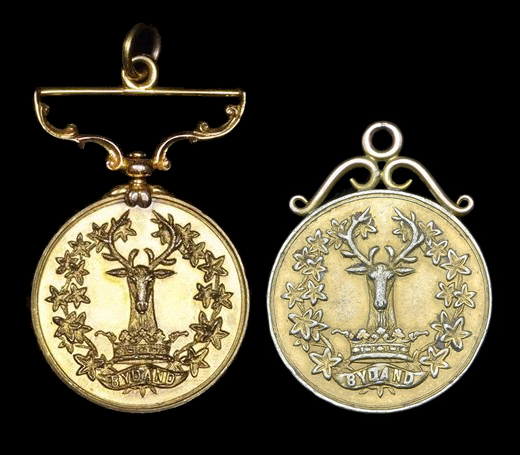 Obverse of the Huntly & Ordiquhill medals

The Aberdeen Journal states: "a gold medal was also presented to Private W. Chalmers, invalided home some time ago, and one is to be sent to Private Macpherson, who has remained in South Africa".

PRESENTATION OF MEDALS AT HUNTLY.

A public welcome, which took the form of a social meeting and presentation of medals, to the returned Gordon volunteers and to Sister Esther WILSON, of the hospital nursing staff, took place in Stewart’s Hall, Huntly, last night. Provost Pirie presided, and there was a large and representative gathering of volunteers and the general public.

Major Miller, in presenting the medal to Sister Esther WILSON, said: – Provost Pirie, ladies and gentlemen – I should like to take this opportunity of expressing, on behalf of the officers and members of A Company, their high sense of this recognition by the town of Huntly of the services of the men of the company who have returned from the front. It is extremely gratifying that you have marked your appreciation of their services in such a handsome and gracious manner. (Applause). I feel sure the men themselves will value these medals, not so much for their intrinsic worth, but far and beyond that, from the fact that they are the gifts of their fellow-townsmen, given to commemorate the great events in which they took part. (Loud applause). While the men of the country have done so much during this great crisis in our history, we cannot forget that another and as heroic part has been played by hundreds of noble women at the call of duty, and that members of the gentler sex – a sex which is supposed to be unfitted for the rougher ways of life – can, when occasion calls for it, serve their country as faithfully and as fully as the soldier on the field of battle. (Loud applause). I am not going to institute comparison between the man who volunteers for active service and the nurse who serves in the field hospitals: but I feel certain that you will agree with me that each is worthy of equal honour. (Applause). Of the work done by the sisters of the R.A.N. Service during the war, it is impossible to speak too highly – such work done amidst painful and distressing surroundings, often exposed to great hardships and the ever-present dangers from disease, does not lend itself to public display, and while we read of the bravery of the soldiers in the fight, we seldom here of the devotion to duty of the nurses in the hospitals, and of what has been done to lessen the horrors of war by the gentle hands of these sisters in charge of the sick and the wounded. (Loud applause). We are honoured in having with us tonight one of that band of noble women in Sister Esther WILSON; daughter of our much-esteemed townsman, Mr John Wilson, Castle Park, and our proceedings this evening are very greatly enhanced by the fact that we, as a community, are desirous of showing our appreciation of Miss WILSON’s services as a member of the R.N.A. Service in the hospitals in South Africa. (Loud applause). Miss WILSON filled a highly responsible position in the hospital at Aberdeen, and several times volunteered for active service, but her opportunity came after Colenso, when her services were accepted. She was stationed at Aldershot for some time, and afterwards sent to the army in Natal, where she served in the Base Hospital at Estcourt, until Natal was cleared of the enemy. She was then sent home in charge of sick and convalescent, and was next attached to the hospital in Belfast, where she was for some time. The war being then less active and no further prospect of active service, Miss WILSON took her discharge. And now, ladies and gentlemen, I have to hand over to Sister WILSON this gold medal, bearing the following inscription: – “Presented to Sister Esther H. Wilson, by the town of Huntly, in recognition of her services with the Army Nursing Service Reserve in South Africa, 1900-1901”. (Loud applause). Sister WILSON, I can only say that it gives us the greatest pleasure to recognise in this small way your valuable services at a crisis in the history of our country, and that we trust you will not estimate our appreciation of your services by the value of the gift. (Loud applause). I feel sure I am only speaking the feelings of all present when I express the hope that you will be long spared to the profession which you so worthily adorn, and that the time you spent in the service of your country in South Africa will be long remembered by you as not the least useful in your life. (Loud applause).

Mr Wilson made appropriate reply on behalf of his daughter, and said how much she would treasure the medal with which they had honoured her at that time. (Loud applause).

A gold medal was also presented to Private W. CHALMERS, invalided home some time ago, and one is to be sent to Private MACPHERSON, who has remained in South Africa.

After the presentation to Sister WILSON, Major Mellis presented a long-service medal to Lieut. Rhind, who joined the volunteers 34 years ago, paying a high tribute to the efficient work Lieut. Rhind did for the company. While all the presentations were made, the audience rose and cheered en masse.
Huntly Express, 10th May 1901

Huntly has no reason to be ashamed of the welcome it has extended to local volunteers from the front, and the brave fellows richly merited all the honour that has been done them. Last Saturday the town seemed to spring into its gayest garb with a rapidity suggestive of the transformation scene in Cinderella’s kitchen. The air was thick with fluttering pennants and in every direction bright flashes of colour met the eye. During those weary months the movements of the “lads” have been watched with keen interest by “those left behind”, and it was fitting on their return that we should show gladness that the suspense was over, and joy that they returned in safety to the old home at the foot of the Clashmach.

How well, how happy, and how manly they looked as they stepped onto the platform on Saturday evening! If they left Huntly “raw volunteers” they returned to it – as Major Mellis later on remarked – “veterans with the stain of war upon them”. And did not their eyes sparkle with unfeigned delight, and the bronzed cheeks flush with pride that was pardonable, as cheer after cheer rent the air as they proceeded up town, and as friend followed friend through the crowds to shake the “boys” by the hand, letting the firm grasp tell the words which the full heart could not utter.

The scene en route, and especially about the Square, will long live in the memories of those who witnessed them. It was a red-letter day for the community, and particularly to the younger members who will live to tell of it to their children’s children. The coming back of the lads seemed to bring happiness to everybody, and all looked as if they were making merry over a personal birthday celebration!

Nor did the decorations and ovations of Saturday finish the welcome home. On Tuesday night Stewart’s Hall was filled from end to end by a crowd assembled to take part in what may be termed the municipal welcome and congratulations. In a few sentences, appropriate and sincere, Provost Pirie gave expression to the universal gladness, and his utterances were punctuated with unstinted applause.

Nothing could have excelled in grace, dignity, and fitness the eloquent words used by Mr Wilson in making the town’s presentations to the lads. Every word found ready response in the hearts of the audience, who cheered till the very rafters might have rung as Mr Wilson handed to each the little circle of gold which will tell for all time coming how the people and the place estimated and regarded the courage and valour of their brave sons.

Perhaps, however, the most impressive scene of all – and the way for it was paved by a short speech of singular beauty from Major Mellis – was when Nurse Sister Esther WILSON came on to receive the gold medal presented to her by the town of Huntly for the many months of service she had rendered at the front as a member of the R.A.N. Service. The continued applause and the waving of handkerchiefs for the moment stopped the Major’s speech, and in the interval the orchestra appropriately struck up “Home, Sweet Home”. After a few words addressed personally to the lady whom the town was seeking to honour, Major Mellis handed the gift over, and as Miss WILSON left the platform the same enthusiasm was repeated – the vast audience rising to its feet and cheering vociferously. Stewart’s Hall has witnessed not a few memorable incidents, but none more so than those to which we have just been referring.

All concerned in the musical programme are to be congratulated. Every number seemed to have fitness for the occasion which called for the gathering. The keynote of the whole was struck in the opening song by Mr Crighton whose concluding refrain he made to run as follows: –

“His regiment’s back once more,
Hear the people how they roar
A welcome to the men who fought so bravely;
With their sweethearts by their side
Huntly’s lads march home in pride,

For they’ve fought for Britain’s honour, fame, and glory”.

The reply which Corporal SUMMERS made for himself and comrades was particularly happy and contained not a few interesting points. It was delightful to listen to the generous tribute he paid to Lieutenant Harry FORBES who, by his kindly consideration, had endeared himself to the men under his charge. Corporal SUMMERS prefaced his remarks by saying that “speechifying” was not in his line, but he gave an excellent account of himself all the same.
Aberdeen People's Journal, 11th May 1901

THE RETURN OF THE VOLUNTEERS.

The volunteers who went from Huntly to South Africa returned on Saturday afternoon. They were met at the station by the members of A Company 4th V.B.G.H., and in their march to the Public Hall received quite an ovation. In the hall a liberal supply of refreshments were served to the men, after which Major Mellis congratulated the men on their safe return, and said their action had done honour, not only to themselves, but to the community. The streets and principal buildings were gaily decorated for the occasion. On Tuesday night a public social meeting was held in Stewart’s Hall in honour of the volunteers, when they were each presented with a gold medal, suitably inscribed. Sister Esther WILSON (daughter of Mr Wilson, Castle Park), who had served at the front as a nurse, was also made a recipient of a gold medal. Mr Wilson performed the ceremony of presenting the medals to the men, and Major Mellis acted similarly towards Miss WILSON, who, like the male volunteers, had a tremendous reception on going to the platform in nurse’s attire. A musical programme was submitted afterwards. The gathering was most enthusiastic.