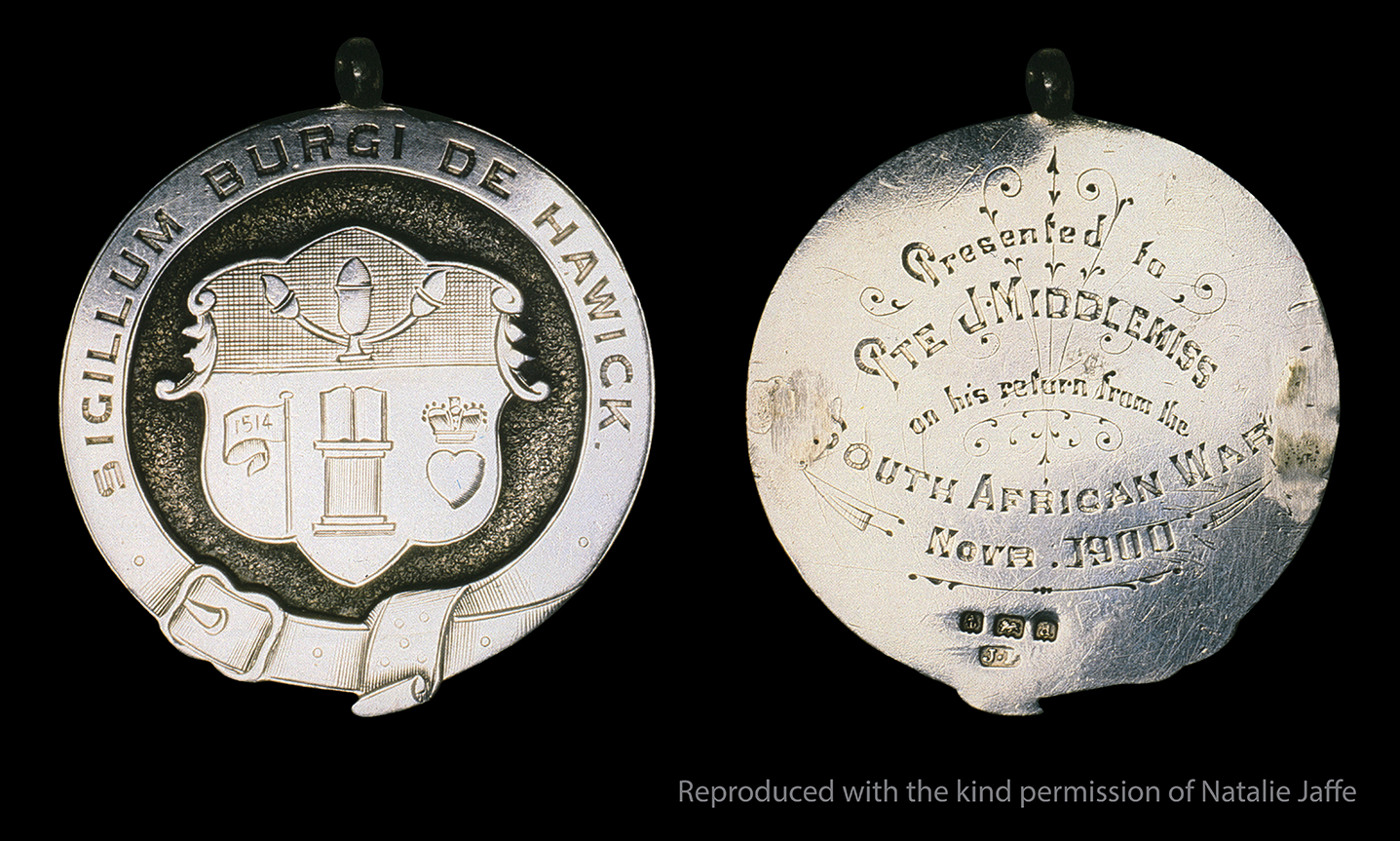 Inscribed with the recipient’s monogram.

Cairnes received a second medal on his return (see below).

Mr Walter CAIRNS, who is preparing at Berwick for service in South Africa, has been presented with a purse of gold, as also a gold medal, bearing his monogram.
Glasgow Herald, 4th December 1900

The Volunteers who have just returned from the seat of war in South Africa, namely, Captain HADDON, Corporal HINDMARSH, Privates LYNN, MIDDLEMISS, and CAIRNS, were each presented last night with a handsome silver medal. The Captain was also presented with a gold albert, and the others with £5 each. There was a densely-crowded meeting in the Town Hal on the occasion, and hundreds had to be turned away. Provost Mitchell presided.
Southern Reporter, 6th December 1900

A public demonstration in honour of the return of the Hawick Volunteers from the front was held in the Town Hall on Monday night. Provost Mitchell presided over a crowded attendance, hundreds bring unable to obtain admission. The hall was appropriately decorated with drapery, mottoes, and banners, the mottoes including “Callants aye to the fore”, “Welcome home”, “Well done K.O.S.B.” When Captain HADDON and the other Volunteers entered the hall, preceded by the drum and fife band playing Common-Riding airs, they were received with prolonged cheering.

The proceedings were opened by the audience singing the hundredth Psalm, after which the Rev. David Cathels said that as a nation we had passed through a long, trying, and momentous ordeal. For more than a year we had been confronted by a danger which menaced the integrity and the stability of the Empire of which we were all citizens, and now that the ordeal was happily past, and that the danger had been met and overcome, they were assembled to do honour to the brave men who went from their midst at call of duty – (cheers) – a call to which, thank God, Scottish men had ever given a quick ear and a responsive heart in the service of their Queen and country. (Cheers). When the Volunteers left them they were confident they would do their duty, and this confidence had been amply justified by the record they had made. Mr Cathels having led in prayer and thanksgiving for the safe return of the Volunteers, the devotional part of the proceedings was concluded by the singing of the second Paraphrase.

Provost Mitchell, in the course of a short address, said the splendid reception accorded to Captain HADDON and his men on Thursday night and the magnificent meeting that evening would convince him of the high appreciation in which these services to Queen and country were held by his fellow-townsmen. (Cheers). He called for three hearty cheers for Captain HADDON and the service men of the King’s Own Scottish Borderers, and for the other soldiers who were with them that night from the front.

These being heartily given, Captain HADDON was then presented with a suitably inscribed silver medal, and a massive gold curb albert, Privates HINDMARSH (in absence), LYNN, MIDDLEMASS [sic], and CAIRNS [sic] each receiving a silver medal and £5.

Mr C.J. Wilson, manufacturer, in making the presentations in the name of the Peace Demonstration Committee, said that night they had a case of history repeating itself in a degree in the return from the victorious campaign of the Hawick lads who volunteered for active service in South Africa, and yet how different from this grand gathering must have been the return in 1514 of the lads from Hornshole, bringing the English Flag with them, an episode which had been celebrated in local song and story ever since. …….

……. Captain HADDON, who was received with great cheering, in returning thanks, said they would never forget the reception accorded to them on their return to Hawick. He could assure them that the Border men under him did their duty well. (Cheers). After leaving Touws River, where they guarded the water works for six weeks, they would march nothing short of a thousand miles, and under fire of shot and shell; shoulder to shoulder with the best men of the regulars, his men never flinched. (Cheers). The chief of the Engineers came and complimented him also on the splendid work the men had done in the trenches at Belfast. It got to the ears of the Commander-in-Chief, Lord Roberts, as well, who also came out and saw the trenches, and complimented him on his men’s splendid work. They went into everything with a determination to do their best for the credit of their regiments and the good old Borderland. (Cheers).

During the evening a programme of patriotic songs was gone through, the proceedings being most enthusiastic.