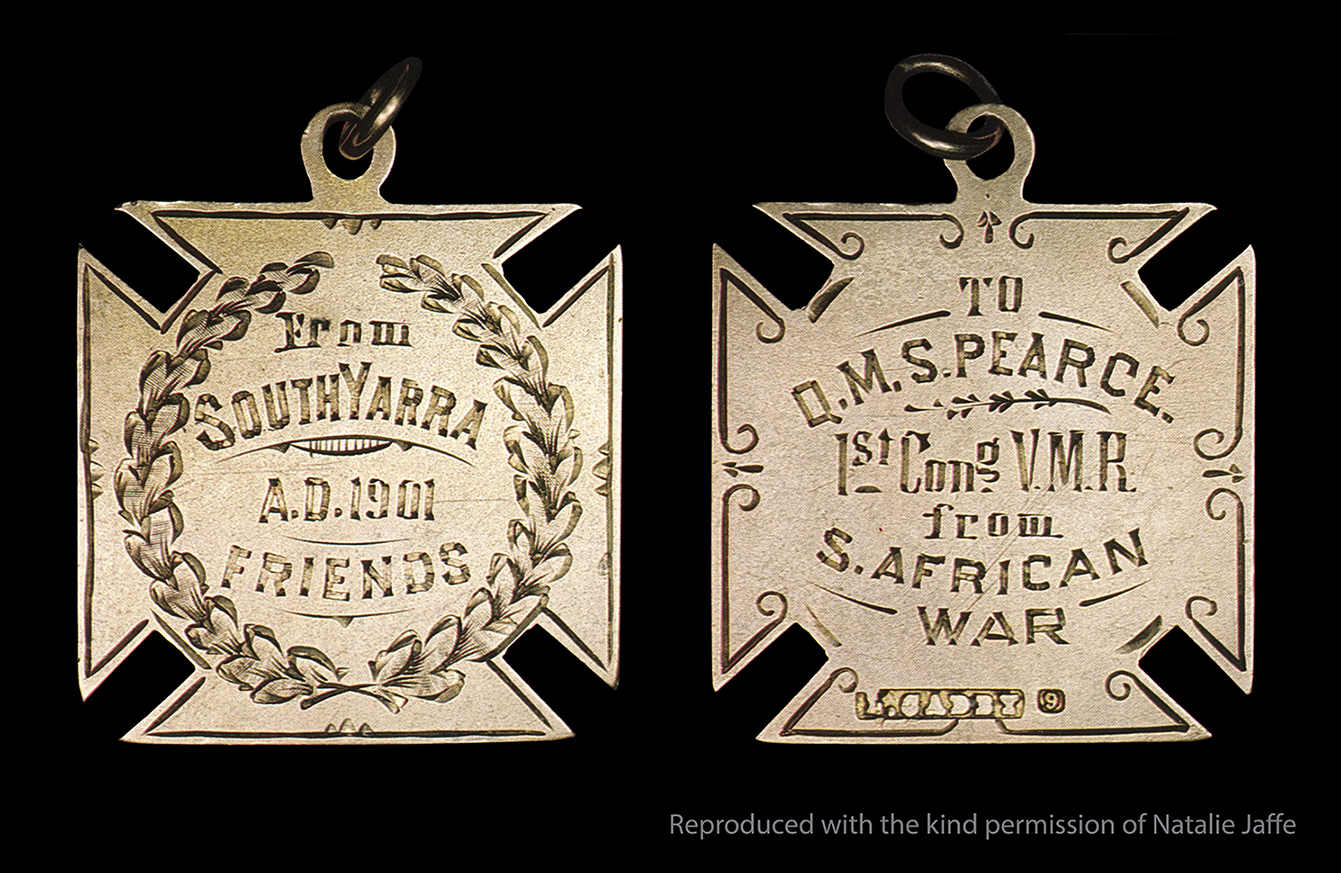 Presentation made by the Hon. T.H. Payne, M.L.C., in the Christ Church Hall, South Yarra.

Presentation made by Mr Joseph Harris, M.L.A., at the South Yarra Hall.

It must indeed have been very gratifying to Corporal Bugler OAKLEY to receive all the congratulations and expressions of welcome which were literally showered upon him on Friday evening, the 3rd inst., when his South Yarra friends arranged a pleasant evening in recognition of his safe return and of the good service he had rendered the Empire during his sixteen months of active service in South Africa. Corporal Bugler OAKLEY, it will be remembered, left for South Africa with the second contingent, who along with their comrades bore the burden and heat of the campaign in such a brave and creditable manner. Several leading gentlemen were amongst those present, and during the evening the guest was made the recipient of a very beautiful gold locket, suitably inscribed.

“He's bronzed and tanned and bearded,
And you'd hardly know him dame,
We've made your boy into a man,

But still his heart's the same”,

have been truly exemplified in the case of young 'Dave', with the exception perhaps of the beard, and there is no doubt that his father and mother, as well as the other members of the family, are justly proud of their boy.

In responding to all the good things said of him, Bugler Dave assured them all that he was a better fighter for his country than he was a speech maker; but nevertheless he let them all see that their generous gift and sentiments of praise were deeply appreciated.

The remainder of the evening was taken up in dancing, about a hundred couples taking part, and in discussing some excellent refreshments. Mr Cullen 'secretaried' the affair to the satisfaction of all and with much credit to himself.
Prahran Chronicle, 7th September 1901

A conversazione to welcome our soldier boys from South Yarra was held in the Christ Church Hall, on Tuesday evening last. There was a very large attendance, and the evening passed off in a most enjoyable and successful manner. Mr Noel Richards who “secretaried” the arrangements, deserves more than a passing word of thanks for the completeness of everything connected with the evening, which enabled the whole affair to pass off in the very best possible manner. The Rev. Canon Tucker presided, and soon made all present feel perfectly at home. The Canon has a wonderful gift of inspiring those who come within the sound of his voice with some of his own genial good nature. There were several speakers and some particularly excellent speeches, those taking part in this department being the Hons. T.H. Payne and E.E. Smith, M.L.C.'s., Messrs Joseph Harris and D. Mackinnon, M.L.A.'s, Mr E.G. Fitzgibbon and Colonel Kelly. During the evening, on behalf of the South Yarra friends of the returned boys, the Hon T.H. Payne, M.L.C., presented gold medals, suitably inscribed, to the following: — Quartermaster-Sergt. PEARCE, Corpl.-Bugler OAKLEY, Corpl. HART, Farrier-Sergt. CROCKETT, and Privates HATCHARD, QUIRK, SOUES, TREYVAUD, DENNIS, HAMMOND, NICOL, FITZGIBBON, and Troopers WALLACE and GODDARD. A very interesting musical programme was rendered, arranged by Mr Stapley. All the items were good. Miss Lola Lindsay gave a fine rendering of Rudyard Kipling's “Thank God we have kept the Flag flying”. Mr Johnson sang “The Village Blacksmith” and “The Englishman”; Mr W. Corby, violin solo, “Intermezzo”; Mr Herbert sang “Dolly's Grey Eyes”; Mr T. Sangston sang “Baby's Name” and “On Guard”; Misses A. and L. Johnstone favoured with an excellent vocal duet “Hark to the Mandolin”; Mr Robert Gammie sang “The Deathless Army”; Miss Gladys Hone recited, and Miss Ethel Britton danced a sailor's hornpipe with bagpipe accompaniment. Miss Stokes played a pretty overture and made a very efficient accompanist. Refreshments were served during the interval, and a very pleasant evening closed with the singing of the National Anthem.
Melbourne Argus, 7th September 1901

HOME FROM THE WAR.

A conversazione to welcome the South Yarra members of the Victorian contingents was held in the Christ Church School-hall, South Yarra, on Thursday. There was a very large attendance. The Rev. Canon Tucker presided, and Mr Payne and Mr E.E. Smith, M.L.C.'s, Mr J. Harris Mr Mackinnon, M.L.A.'s, Mr E.G. FitzGibbon, and Colonel Kelly were amongst the speakers. During the evening Mr Payne, on behalf of the South Yarra friends of the returned soldiers, presented gold medals, suitably inscribed, to the following: Quartermaster-sergeant PEARCE, Corporal-Bugler OAKLEY, Corporal HART, and Privates HATCHARD, QUIRK, SONES, TREYVAUD, DENNIS, HAMMOND, NICOL, WALLACE, GODDARD, FITZGIBBON, and Farrier-Sergeant CROCKETT. An interesting programme was rendered, and a most enjoyable evening spent.
Prahran Chronicle, 1st November 1902
On Monday evening last an entertainment was held in the South Yarra Hall to welcome back from the war Trooper Stanley KIMPTON, of the Fifth Contingent. While in Africa Trooper KIMPTON was in the hospital a good part of the time through ill health; but is now considerably improved. Mr D.S Oakley presided, and an excellent programme was rendered in which the Messrs Stewart, Webb, Renton, Hubble and Messrs Sandoe and Reid took part. 'Welcome home' speeches were made by the Rev. Canon Tucker on behalf of local residents; by Mr W.H. Triggs for the South Yarra Trades Club; and by Captain Stockdale for the Rifle Club. An apology was received from the Hon. T.H. Payne, M.L.C.  During the evening Mr Joseph Harris, M.L.A., presented the returned soldier with a gold medal from his South Yarra friends. At the conclusion of the concert dancing was indulged in until midnight. Mr J.T. Turner and Mr Gleghorn were the hon. secretaries, while Mrs and the Misses Wells, Mrs Triggs and Miss Kemp assisted very materially in arranging details.