Presentation made by Lady Tennyson.

Presentation made by Lady Tennyson, on the Military Parade Ground, North Terrace, Adelaide.

Type 1 (1901)
Reverse: "Presented to Nursing Sister Stephenson, on behalf of the subscribers to South Australia fund for war nurses, as a memento of devoted service. October 7, 1901".

Type 2 (1902)
Inscribed: "Presented to Nursing Sister ________ on behalf of the subscribers to the South Australia fund for war nurses, as a memento of service".

"The medals are an adaptation of the regulation military cross, with the Union Jack and the South Australian flag forming a bold relief to the design".

"The devoted service cross is a pretty ornament in gold, and over a laurel wreath in the centre the Union Jack and the South Australian flag are placed. The whole is suspended by chains from a plain bar bearing the inscription '1901. Africa. 1902.'" 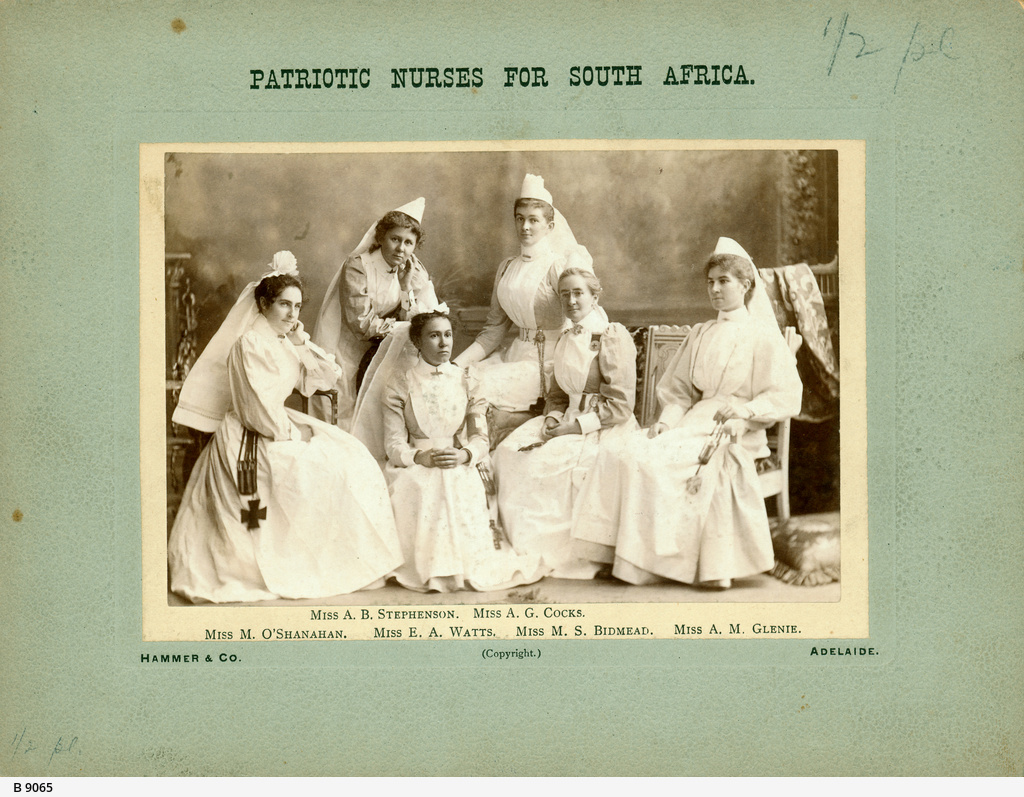 A large number of people assembled at the parade ground on Saturday afternoon to witness the presentation by Lady Tennyson of devoted service crosses to Nursing Sisters A.M. GLENIE and M.S. BIDMEAD, and to the field and garrison artillery of the awards gained in the recent examinations. The artillery brigade was drawn up in a hollow square, and His Excellency the Governor and Lady Tennyson, accompanied by Lord Richard Nevill, were received at the carriage by Col. G. Fergusson, officer commanding the brigade, and escorted to a table in the centre, which was covered with a Union Jack. Nurses GLENIE and BIDMEAD, and several members of the committee of the South Australian Nurses’ Fund, were then introduced by Lady Brown to Lady Tennyson, who, after conversing with the nurses in regard to their service on the field, pinned on the decorations by the side of the royal red cross and South African war medal which each was wearing, and shook hands in a friendly manner, wishing them success in their future careers.
Adelaide Express, 26th November 1902

Lady Brown informs us that devoted service crosses have been purchased out of the interest on the War Nurses’ Fund, and sent on behalf of the subscribers to Nurses O’SHANAHAN, WATTS, and COCK, so that all the war nurses are now in possession of such awards for their work on the battlefield. Lady Brown is going away for a holiday, and during her absence Miss Hill will be the acting treasurer. The fund cannot be closed until the final accounts have been received from the War Office.