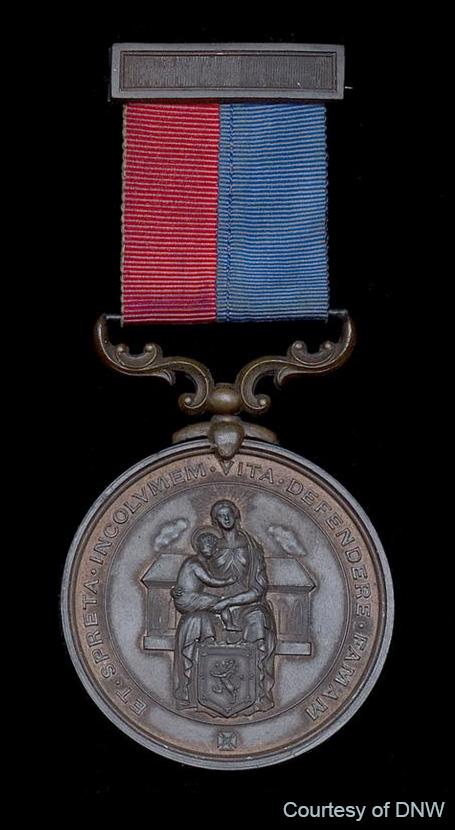 Presentation made by Mrs Russell (wife of the Provost), in the Victoria Hall, Selkirk.

Presentation made by Mrs Russell (wife of the Provost), in the Market Place, Selkirk.

Obverse with civic arms and motto of Selkirk: "ET SPRETA INCOLVMEM VITA DEFENDERE FAMAM".
Reverse: "TO / [PTE GEORGE SCREEN] / ON HIS RETURN / FROM ACTIVE SERVICE / IN SOUTH AFRICA / AUGUST 1902".
Note: some felt that this bronze medal was a "paltry" gift, and that the men should have received gold medals.
Storrie example illustrated in Hibbard.
Linton example sold through Dix Noonan Webb, 23/09/2011, for £3,200 (with silver watch, QSA and Special Constabulary Long Service medal).

Screen example in the Constantine Collection (with silver watch).

On Friday night the ten men who have returned from active service, along with the ten men of the waiting or reserve company, were entertained to dinner in the Victoria Hall, the arrangements for which were carried out by a joint-committee of the Town Council and the Selkirk Company of Volunteers. The hall was gaily decorated with flags and other military emblems, while on the front of the gallery was a scroll with the inscription in large letters, “Welcome Home”. A large number of plants and cut flowers graced the platform and the tables, the plants being sent from Thornfield, Wellwood, Woodburn. There was an attendance of about 300, for whom accommodation was found at six tables. The Volunteer Company was present, being marched from their hall to the music of the pipes. Mr Dorn, Station Hotel, was the purveyor.

Provost Russell, who wore his chain of office, presided, and the vice-chairmen were Bailie Linton and Mr Pollock, Town Clerk. The Volunteers from the front occupied the places of honour to the right and left of the Chairman. …….

The Chairman was loudly cheered on rising to propose the toast of the evening, “The Selkirk Volunteers from South Africa”. He could have liked, he said, had the toast fallen into the hands of one more capable of doing it justice than himself. The return of the Volunteers from active service marked an epoch unique in the history of the burgh, in the history of the Volunteer movement, and in the history of the nation. (Cheers). The circumstances which called forth so great a display of loyalty twelve months ago were so well known to them all that a passing reference to them was quite sufficient. When non-success attended our arms in the opening months of the campaign, and when the difficulties of carrying on the war successfully appeared to be so great, the loyalty of the nation was stirred to its depths, and manifested itself in a variety of ways. Not the least of these ways was the loyalty shown by our Volunteer forces all over the country – (cheers) – and as they were all aware, the Volunteers of Selkirk were second to none in this respect. (Loud cheers). The chronicler of the Forest, who was with them that night, informed them that the men of Selkirk in their ancient records never appeared to greater advantage than when there was danger ahead and the scent of battle in the air. Each century had witnessed the good old burgh sending its quota of fighting men to some well-known battlefield, and today they were reaping the fruits of their bravery in the civil and religious liberties which they now enjoyed. (Cheers). Nor was the spirit of those bygone days dead in their midst today. The opening years of the century furnished a ready example. One night in February, 1804, at the time when the genius of Napoleon threatened to lay all of Europe, including their own beloved land, beneath the heel of a military despotism, trumpet and drum sounded through the streets of Selkirk, and the sleeping inhabitants were soon awake and in the streets. The Volunteers of those days lost no time, and by ten o’clock the next morning they had marched into Dalkeith, there to learn of “The False Alarm”. (Cheers). The Souters of those days, however, taking the will of the deed, accorded them a right hearty reception and a torchlight procession on their return, and now they were met, at almost the century’s close, to celebrate the safe return of those brave fellows whom that night they wished to honour. (Loud and prolonged cheering). It was no false alarm for them when nine or ten months ago they left Selkirk to the call of their country and at the call of duty. (Cheers). In the enthusiasm of their youth, in the strength of their manhood, they left their homes and their friends to face the unknown. (Renewed cheers). The change from the little town to an enemy’s country, of vast extent, and thousands of miles away, must have been sufficiently great, but who among them who had not experienced it could realise the danger of battle, the whizz of bullets from an unseen foe, and the horrors of war. Add to all that those dangers no less great, resulting from fatigue, exposure, and disease, and they might then begin to form some slight conception of what these lads had endured. (Cheers). They ought to be profoundly thankful that, with the exception of one of their number, who was still in South Africa, but who was shorty expected home, their gallant Volunteers had returned with their ranks unbroken. (Loud cheers). And now he would to give voice to what must be the feelings of every one present, and to welcome home their honoured guests to that “land of every land the pride”, and to that “spot of earth” which must to them be supremely blest. (Prolonged cheering). And he gave them a thrice-hearty welcome to that land, their country; and to that spot, their home. (Renewed cheers). Before submitting the toast, he had, in the name of the Town Council and the inhabitants of Selkirk, to ask the Volunteers from the front to accept at their hands a small memento, as some expression of their appreciation of their valour and the services which they had rendered in the days if their youth to their Queen and their country. (Great cheering, which continued some time). At the request of the Council, Mrs Russell – (cheers) – would pin on to the breasts of each of them a bronze medal, bearing on the one side the impress of the arms of the burgh, and on the other the following inscription: – “The Royal Burgh of Selkirk. To [here follows the name], on his return from active service in South Africa, November, 1900”. (Cheers).

The ten active service men then ascended the platform amid a scene of great enthusiasm, the large audience rising and cheering them with vigour for several minutes. They were accompanied by Major Alexander, Serg.-Major Adams, and Mrs Russell. They were drawn up in a line facing the audience, and as their names were called out by Serg.-Major Adams, each member of the gallant company stepped forward and was decorated with the medal by Mrs Russell. Each man was loudly cheered as he stepped forward to receive his well-earned medal, the gathering remaining standing all the time.

The ceremony over, the Chairman said – This toast must be drunk with all the enthusiasm of which we are capable, and I now give it you – “The Selkirk Volunteers from the Front”.

This was the signal for another outburst of enthusiasm, the cheering and the waving of handkerchiefs being kept up for several minutes. The toast was followed by the singing of “For they are jolly good fellows”, which was done with great vigour.
Southern Reporter, 6th December 1900
Mr A.F. Roberts referred to the paltry nature of the medals given to the men to commemorate their services. We heartily concur in his remarks, and we believe very little difficulty would have been experienced in raising enough to give them handsome gold medals. In this again other and less important centres have shown us how it can be done.
Mid-Lothian Journal, 3rd October 1902
On Saturday an interesting ceremony took place at Selkirk when the town of the “Souters” delighted to honour those of their number who had volunteered for active service in South Africa. The ceremony took place in the open air Market Place, where a platform was erected for the principal personages. Provost Russell presided, and warmly commended the men for the service they had given, remarking that 27 men had gone out to the war from the Selkirk Company, three of them on two occasions. The presentations consisted of silver watches and bronze medals, the latter were the gift of the Town Council, and the watches were subscribed for by people in the town and country. The Provost also stated that the Town Council were to place a panel in the Mercat Cross recording the names of those who had volunteered and gone for service, so that their names might be handed down to future generations. Mrs Russell, the wife of the Provost, then pinned the medals on the breasts of the recipients, while Mrs Craig Brown presented the men with their watches. Sir Richard Waldie Griffiths, Officer Commanding the Border Battalion, on behalf of the men, returned thanks to those who had given the medals and the watches, and said that the reason the Selkirk Company had sent the most men to the front was that is was the best shooting Company in the Battalion. Evidently Sir Richard does not believe that shooting men are just “pot hunters”. He also took occasion to thank the employers of labour for the ready way they had helped in regard to the camp and other matters.