Gold medals and illuminated addresses, to:

PRESENTATION TO YEOMANRY AND VOLUNTEERS.

The presentation to the returned yeomanry and volunteers who have served in South Africa took place yesterday (Wednesday) evening in the Corn Exchange. The men were invited to a dinner under the presidency of the Constable, Mr W.G. Alexander, and were afterwards presented with a gold medal, bearing the recipient’s name and “South Africa 1900 01”, the reverse being stamped with the arms of the Borough of Hungerford. The proceedings were most enthusiastic, loyal and patriotic toasts being heartily honoured, while the returned warriors were received with loud demonstrations of applause as each stepped forward to receive the medal and an illuminated address.
Reading Mercury, 28th September 1901

PUBLIC DINNER TO YEOMANRY AND VOLUNTEERS.

In honour of the Yeomanry and Volunteers who have returned from South Africa, a Public Dinner was given in the Corn Exchange on Wednesday evening under the presidency of the Constable (Mr W. Alexander), accompanied by Colonel Willes and Capt. Portal and the principal residents of the town. Letters of apology for non-attendance were read by the Chairman from General Butler, General Baden-Powell, Lord Chesham and others, regretting their inability to attend and wishing every success to the meeting. The toasts of the evening were heartily drunk, and each man, on receiving his medal and address from Col. Willes, was loudly cheered.
Newbury Weekly News, 3rd October 1901

RECOGNITION OF THEIR PATRIOTISM.

FOR KING AND EMPIRE.

As briefly recorded in last week’s edition, the town of Hungerford aroused itself to enthusiasm on Wednesday, in order to show honour to the local members of the Imperial Yeomanry and of the Berks Service Company of Volunteers who had taken part in the South African campaign. Incidental to the public dinner at the Corn Exchange, there was a display of flags and banners, patriotic airs were played by the Aldbourne Brass Band, and townsmen arrayed in broadcloth reserved for special occasions, were to be seen hastening to the public function, anxious to pay becoming respect to the guests of the evening, who were Quarter-Master-Sergt. G. ANDREWS (39th Company Imperial Yeomanry), Farrier-Sergeant CLEMENTS (58th Company Imperial Yeomanry), Privates C. BATCHELOR, BRAY, and PALMER (Berks Volunteer Service Company), H. DOBSON (Hants Service Volunteers), Private J. GIBBS (South Wales Borderers’ Mounted Infantry), and Private G. WEBB (Royal Berks Regt.).

PRESENT AT THE DINNER.

The health of His Majesty the King, the Queen and Royal Family, having been honoured with becoming loyalty, Mr G.B. Cottrell proposed “The Imperial Forces”, bringing down cheers by the remark that Hungerford, in the loyalty of her sons, had taken a practical part in the war, and therefore it was but fitting that honour should be paid to their patriotism by welcoming them to a dinner of their fellow citizens. Response was made by Captain Portal. In saying that they were proud of their guests they would be saying too little, for, as the speaker added: We loved them for the efforts which they had put forth to assist us, we appreciated every effort that had been made, and we looked forward to the time, if there was ever another struggle, or a greater struggle, when they would come, not only in the numbers in which they had come now, but in still greater numbers, to assist us (applause). For the Army, the speaker said, it would be the proudest moment of his life if he could get out and join his regiment that was out there now. Unfortunately, he met with an accident, and that detained him at home. He could only, under the circumstances, look on and admire the others (hear, hear). The men who had gone out had upheld most nobly the traditions of their ancestors; and he thought it would be hard to say which force had behaved with most conspicuous bravery.

The toast of “Our Guests” came from the chair, the Constable remarking that they were naturally proud of those who, in response to their country’s call, had gone forth from Hungerford to uphold the honour of old England. The duty to reply devolved on Quartermaster-Sergeant ANDREWS, who received quite an ovation. He confessed he did not know adequately how to express the thanks of himself and his fellow guests for the manner in which they had been entertained. If the time should come when more men were wanted, he would be among the first to offer himself (applause).

Colonel Willes was next called upon to present the medals and addresses, and in so doing said Hungerford people were particularly desirous of recognising the gallantry of the brave men connected with the old town of Hungerford, who were ready to bear their share in the recent crisis through which the British nation, as represented in South Africa, had passed. The names of the men were then called out, namely, Quartermaster-Sergt. George ANDREWS, Corpl. W.F. WILLES, Trooper J.S.H. BURDER, and Trooper COOMBES, of the Berks Imperial Yeomanry; Pte. T.E. ALEXANDER, Pte. Charles BATCHELOR, Pte. E.J. BRAY, and Pte. J.R. PALMER, of the Royal Berks Service Volunteers. Of these Corpl. WILLES and Pte. ALEXANDER are still at the front, and Troopers BURDER and COOMBES were unable to be present. To the men generally Colonel Willes addressed words of congratulation, and each received a hearty handshake. To Quartermaster-Sergt. ANDREWS he said, I am pleased to recognise in you one who has risen on active service from a private to almost the highest rank among the non-commissioned officers, and also to express to you my delight to find that you are one of the old yeomen who have gone out. A letter which I received, while you were on active service, from one of the officers under whom you served, stated, “George Andrews is one of my right-hand men” (loud applause).

PRESENTATION OF MEDALS AND ADDRESSES.

Each medal was inscribed with the name of the recipient, together with the words “South Africa”, and the date on one side, on the other side being the arms of Hungerford, consisting of the star and crescent.

The text of the address was:

“We, the inhabitants of the Borough of Hungerford, offer you a hearty welcome home after your extended and meritorious services in assisting to maintain the honour and prestige of your country in South Africa. We also desire to place on record at the same time our high appreciation of the self-sacrificing and patriotic spirit you displayed, at the time of a great national emergency, in volunteering to face the dangers and difficulties of an arduous campaign in a distant land. We are proud to know that you and those associated with you have fully sustained the reputation gained by the Berkshire men for bravery and endurance in their country’s cause, and we are thankful that you have been spared to return to your home after such a prolonged experience of the trials, hardships, and dangers of war. We trust that, in the providence of God, you may be long spared to enjoy the honour of your loyal and devoted services, and that your noble example may ever prove an incentive to your fellow-countrymen to respond to the call of duty on behalf of the King and Empire. Signed on behalf of the inhabitants of Hungerford” (then followed the signatures of the Committee).

It also devolved on Colonel Willes to propose the Constable and the Welcome Home Committee, the Constable being described as one who did his best for the town and neighbourhood; while Mr Myddelton, the efficient hon. secretary, and the committee had rendered services in which too much could not be said in their praise. 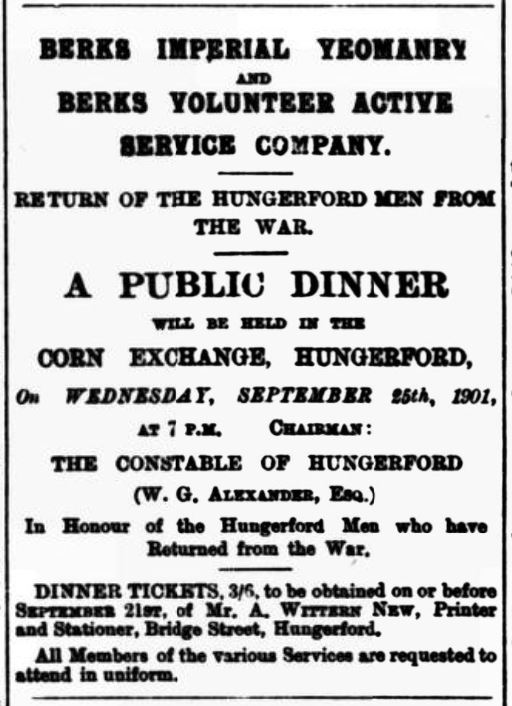 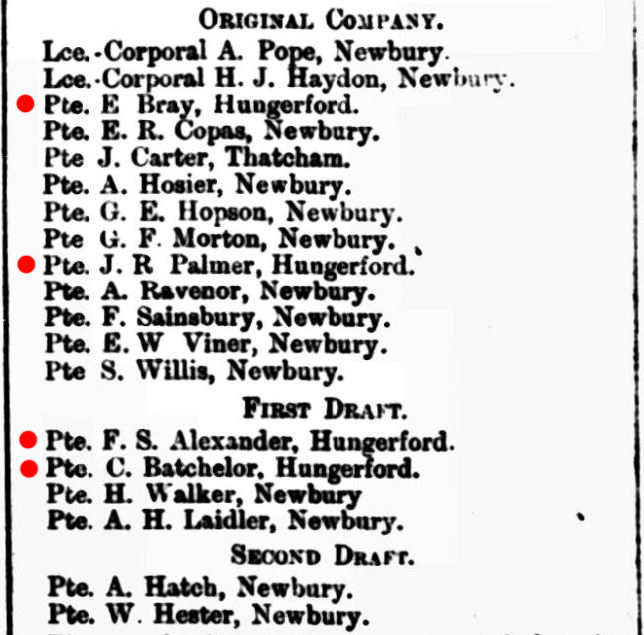