Presentation made by President Sheehan, in Daly's Hall, Healesville.

Inscribed: "Presented to Trooper Thos. McCallum, 5th V.M.R., by the residents of Healesville, on his return from S. Africa, as a mark of esteem and appreciation of his valour in battlefield. 31/1/02".

On Friday evening last the local railway station was crowded with residents of Healesville on the arrival of the 7.20 train, for the purpose of according Trooper T. McCALLUM, who had just returned from South Africa, a fitting welcome home. The Healesville Brass Band was also in attendance and played selections. On arrival of the train, cheers were given for the returning trooper, and as he stepped from the train it was a pleasant surprise to his many friends to see him looking so well, when only a few months before it seemed as if he was at death's door, owing to being shot through the chest while on active service with the 5th Victorian Contingent. After numerous hand-shaking, Trooper McCALLUM was taken to the Terminus Hotel, accompanied by previously returned soldiers, where his health was drank, the toast being proposed by the president of the shire (Cr. M.J. Sheehan), and was accompanied by musical honors and cheers.

The same evening, in Daly's Hall, a public welcome was tendered to the returned soldier. The building was decorated for the occasion, and despite the extreme heat all the available seating capacity was taken up, and a number had to stand, which was ample testimony that the welcome home was a genuine one. The chair was occupied by President Sheehan, and other councillors and prominent residents occupied positions on the platform. Trooper McCALLUM sat on the right of the chairman, along with Troopers SLOSS and CUMMINGS (of Tullabardine's Horse). The proceedings opened with an overture by Mrs Baird, and then Mr Almond sang in his usual style, “Sons of the Southern Sea”, being followed by Mr Ingle with “Just as the in Sun Went Down”. Mr Burnside sang he “A Soldier and a Man”, and then came the important part of the proceedings.

The Chairman said he had been requested to make a small presentation to the returned soldier and to welcome him home on behalf of the people of Healesville, and it gave him very great pleasure to do so. In looking upon the audience, Mr McCALLUM could see that his welcome home was a genuine one. The medal was a small token of esteem from the people (not that it was considered the value of his services) in recognition of what he had done on the battlefield. They were all doubly pleased to see Mr. McCALLUM back again, as at one time there was a possibility of his not returning. When the news was received that he had been severely wounded, it was the expression of the people that the next reports would be more favorable, and he was very pleased indeed to see him again in such robust health. He looks remarkably well, considering the hardships he has had to put up with, and we have to thank Providence for his return. Of all the contingents, the 5th, of which Trooper McCALLUM was a member, had undergone much greater hardships than the others, but they had met what they had to do like men, and we are proud that one of our soldiers was with them. He wished to say that nothing gave him greater pleasure than presenting this small token to Trooper McCALLUM with the hearty good-will of the people of Healesville, at the same time handing to the returned soldier a handsome laurel wreath gold medal, which bore the following inscription: – "Presented to Trooper Thos. M'Callum, 5th V.M.R., by the residents of Healesville, on his return from S. Africa, as a mark of esteem and appreciation of his valor in battlefield. 31/1/02". On the obverse side of the medal was a soldier mounted on his stead.

Mr Sloss said there was nobody prouder than he was to see so many present that evening, except it was Tom McCALLUM's father. He was pleased to welcome him home, and glad that they had men able and willing to go and uphold the freedom of the Empire.

Rev. E.S. Chase said the welcome was a double one. They welcomed him back from the jaws of death and also welcomed him home, and now that they had their three soldiers back their cup of joy was full. He most heartily welcomed Trooper McCALLUM back to Healesville.

Mr. Crowley said he heartily welcomed Trooper McCALLUM home, who left here for the purpose of fighting for his King and country. He believed that those who went to South Africa went out to fight for freedom, and he would not like to see the flag they were fighting for fall. He verily believed that the war with South Africa was justified, and it should be brought to an end with satisfaction to the British flag, and if the British Government asked for 10,000 more soldiers Australia would supply them. It was a glorious thing to know that only one of the Healesville soldiers was wounded, and it cast quite a gloom over the place when it became known that Trooper McCALLUM fell on the field, but he was proud that he was amongst them again – a man whom King le Edward VII should be proud to shake hands with. The Government should do all in their power to assist those who had fought for their country. He sincerely welcomed Trooper McCALLUM home, and said he could walk about a proud man, as he had done his duty.

Mr Shaw said that on an occasion like this he could not help joining in welcome home. He was glad to see such sentiment and loyalty to the country that brought such a large gathering together. He was glad to see Trooper McCALLUM back again, and wished to congratulate the father of the young soldier on his restoration to health.

Mr Ingle proposed that the best thanks of this meeting be tendered to Trooper McCALLUM for [illegible] conduct on the battlefield, and for the sacrifices he has made in the cause of the Empire.

The motion was seconded by Mr Falconbridge, and carried by acclamation, three hearty cheers being given for Trooper McCALLUM, and one for the soldier who is still in the field.

Trooper McCALLUM was enthusiastically received on rising to respond. He said he was sorry he could not make a speech, but thanked them for the presentation they had made him, and concluded by saying he did not deserve what had been said about him.

The singing of "God Save the King" concluded the proceedings.

The hall was then cleared, and dancing was indulged in until the wee sma hours. 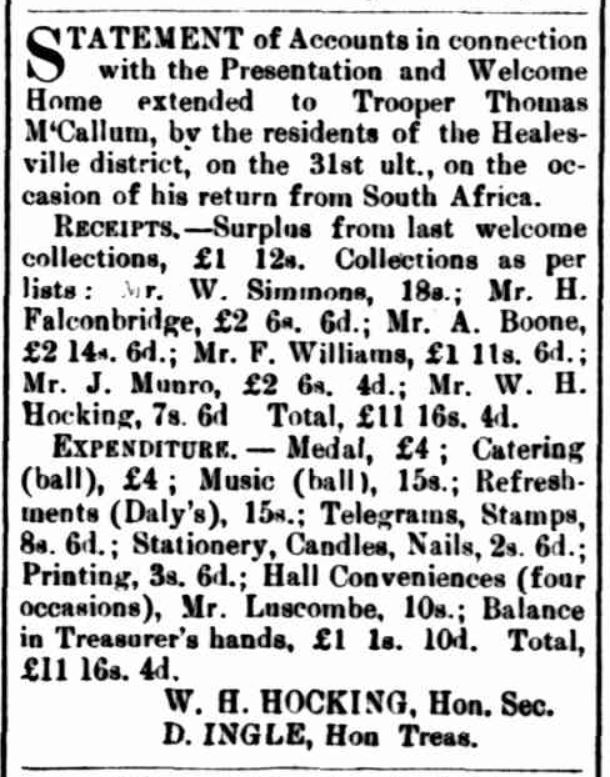