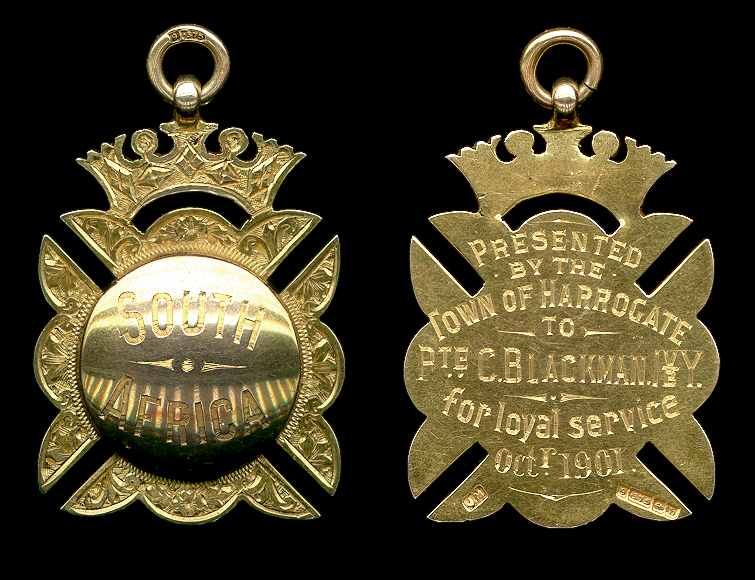 Presentation made by the Mayor (Alderman W.H. Milner), at the Spa Concert Rooms, Harrogate.

A number of unidentified men

"About 75 men - Yeomanry, Volunteers and Reservists of all arms, and Regulars - from Harrogate and the immediate neighbourhood have been sent to the front. Of this number fully 50 have returned, and the townspeople accorded the men a public welcome home on Saturday [26/10/1901] afternoon" (Yorkshire Post, 28/10/1901).

This suggests that a further 25 souvenirs were presented at a later date. To the 75 need to be added those who went to the front after 26/10/1901. It is clear that medals were presented to all Harrogate men who served in South Africa, £30 being allocated for medals for "Harrogate men" still at the Cape (Leeds Mercury, 26/11/1902). Sixteen volunteers saw service during 1902, only three of whom are included in the list above (2nd V.A.S.C.). With these and other Reservists, Yeomen, Ambulancemen, etc., the total must be in the region of 100.

Sir, – I should be very much obliged if you would make public in your columns that Messrs Snow and Ashworth, silversmiths, Harrogate, have presented two pairs of khaki field glasses to Corporal RUSSELL and Private J.W. WRIGHT, both of Imperial Yeomanry, who are proceeding to South Africa on the 14th inst.

Messrs Snow and Ashworth have presented field glasses to all men who joined the Imperial Yeomanry, and who were residents in Harrogate – these last two pairs making up a total of seven pairs which have been received through their generosity – the others having been given to men in Nos. 9 and 66 Companies, which are already at the front. – I am,

WELCOME TO RETURNED SOLDIERS AT HARROGATE.

Since the commencement of the war about 75 men – Yeomanry, Volunteers, Reservists of all arms, and Regulars – from Harrogate and the immediate neighbourhood have been sent to the front. Of this number fully 50 have returned, and the townspeople accorded the men a public welcome home on Saturday afternoon.

The principal gathering took place in the Spa Concert Rooms, where the men assembled, under the command of Lieut. Featherstone. A crowd of several thousand people in the vicinity of the Spa gave the soldiers a hearty welcome. The Mayor (Alderman W.H. Milner) presided, and was supported by the Right Hon. J.L. Wharton, M.P., the Bishop of Richmond (Dr Pulleine), the Town Clerk (Mr J.T. Taylor), members of the Corporation, and prominent townsmen.

The Mayor, having expressed the town’s appreciation of the men’s services, distributed the souvenirs, consisting of a gold medallion, surmounted by a mural crown, engraved “South Africa”, and on the reverse “Presented by the town of Harrogate to _______ for loyal service, October, 1901”.

Mr J.L. Wharton, M.P., in moving a vote of thanks to the Mayor, said it would go to the heart of any Yorkshireman to be allowed to greet, upon their arrival back from the war in South Africa, so gallant a body of men as he saw before him. (Cheers). It was at a moment of great national and Imperial Pressure – at a time they might almost call a crisis – when men in England volunteered to go and brave the burning heat and drenching storms of South Africa, to do what they felt was their duty.

The men afterwards attended service at Christ Church, the sermon being preached by the Bishop of Richmond.

In the evening they were entertained at a banquet at the Queen Hotel. The Mayor presided, and gave the loyal toasts, after which Mr Samson Fox submitted the toast of the evening, “Our Guests and the Lads at the Front”. Lieut. Featherstone responded.

The Mayor, in responding to the toast of his health, submitted the health of General Buller, which occasioned much cheering. His worship said the General had received hard treatment since he came back from South Africa, and had been much blamed by the critics at home. There were corners in the War Office, and among them men jealous of Buller, who had for months hounded at him until, like an Englishman, he had turned round and flung it in their faces. (Cheers). General Buller was sent to South Africa with a small army of 40,000 men, and now he was hounded because he could not do with 40,000 what another General had barely succeeded in doing with 250,000 men. (Cheers). When he read the papers in London on Tuesday morning he felt General Buller’s position very keenly; it was very easy to sit in Fleet Street and sling ink.

The toast was drunk with much enthusiasm.
Knaresborough Post, 2nd November 1901

WELCOME HOME TO THE MEN FROM THE FRONT.

On Saturday the Harrogate men who have returned from active service in South Africa were publicly welcomed home and their services recognised. The proceedings commenced with a large gathering in the Spa Rooms in the afternoon, presided over by the Mayor (Ald. W.H. Milner), who was supported by the Right Hon. J.L. Wharton, M.P., Ripon Division, the Bishop of Richmond (Dr Pulleine),  …….

The members of the Corporation Fire Brigade (under Supt. Allen) and the Harrogate Volunteer Fire Salvage Corps (under Captain Shutt) occupied a prominent position in front of the platform. The men from the front paraded at the Drill Hall, and headed by the Volunteer Band, marched to the Spa, under the command of Lieutenant FEATHERSTONE. Their arrival at the Spa was the signal for enthusiastic cheering. They were a smart lot, and included Yeomen, Volunteers, and several Reservists of many branches of the regular Army.

The Mayor said he had asked them to attend that day to welcome the men who had been in South Africa from Harrogate and the district. The ceremony probably would have been more appropriate a few months ago, but owing to circumstances over which they had no control it had been delayed. Looking at the gathering that day he did not think the men who had returned would have received a more enthusiastic reception had it taken place a few months before. He referred to the lamentable death of the Mayor and the interest he would have taken in the proceedings had he lived to welcome home the men from the front. When they were in one of the tightest corners the nation had been in, the men of England nobly volunteered their services for the front to assist the regular troops in their arduous task in South Africa. (Applause). As Mayor he welcomed them back, and he was sure every inhabitant of Harrogate joined him in acknowledging the noble work they had done and the devotion to their country they had shown by their conduct. (Applause). The Mayor referred to the loyalty throughout England and the Colonies. Respecting the war, he said there were one or two reasons why it had been carried on so long. In the first place the latitude allowed the Press was carried to an excessive degree, and by this means their opponents knew before we in England what was being done. Another important factor was that they had been making war with kid gloves on. At the beginning of the war Boers were taken prisoners and allowed to return home after having sworn allegiance to Her Majesty’s Government. Within a day or two of receiving that pass they were caught acting as spies or fighting again against them instead of being kept prisoners of war. (Hear, hear). If there was to be a lasting peace in South Africa it meant that someone had to be master there – either Boer or Briton. The war had been going on over two years, and if it had to be carried on another two it must have an ending, and England must be left unreservedly master of the situation, and that white men in their domains should live in freedom and in peace. (Applause). On behalf of the inhabitants of Harrogate he welcomed them; they were proud of them and of the work they had done. (Loud applause). They proposed to make a small recognition of their services, and it was a recognition he hoped many of them would live long to enjoy. (Applause).

The Mayor then presented each of the men with a solid gold medal. It is of choice design, surmounted by a crown. On one side is engraved the words “South Africa”. The reverse side bears the words “Presented by the town of Harrogate to ___________ for loyal service, Oct., 1901”. It is specially designed and executed by Mr E. Anderson, gold and silversmith, the King’s Arcade, James Street, Harrogate.

Mr J.L. Wharton, M.P., who received a hearty reception, said he could assure them that he felt it no slight privilege or pleasure to be with them. (Applause). He was sure it would go to the heart of every Yorkshireman to be allowed to come and greet, upon their arrival back from the war in South Africa, so gallant a body of men as he saw before him. (Cheers). It was at a moment of great national and Imperial pressure – at a time they might almost call a crisis – when men in England volunteered to leave their homes of luxury and contentment to go and brave the burning heat and drenching storms of South Africa, to do what they felt was their duty. (Cheers). All Englishmen and Englishwomen would thank them for going to save the Empire from a greater danger than was ever suspected at the time. (Hear, hear). It was with that feeling in their hearts that they assembled to give a most hearty greeting to those who had come back, and to assist the Mayor in the ceremony he had just performed for the men who were well worth the honour and recognition from Harrogate and the neighbourhood for their gallantry and success. (Cheers). …….

Mr Wharton then proposed a vote of thanks to the Mayor for presiding.

The procession was then formed, consisting of police, under Sergeant France, the Rifle Volunteer Band (headed by Bugle-Major J. Clapham, who was one of the first to join the local Volunteer company), the men from the front, mace bearer, Mayor, Town Clerk, members of the Corporation, officials, representatives of Friendly Societies, Fire Brigade, Salvage Corps, &c. They proceeded via Parliament Street, James Street, Station Bridge, and North Park Road to Christ Church.
Bradford Daily Telegraph, 4th April 1902

HONOUR FOR A LIVERSEDGE YEOMAN.

Mr Martin HIRST, of Liversedge, who recently returned from South Africa, having been out with the Harrogate contingent of the Imperial Yeomanry, yesterday received a gold medal, presented by the town of Harrogate. The medal is of solid gold, and in the form of a Maltese cross, surmounted by a crown, with a plain raised centre bearing the words “South Africa”.
Pateley Bridge & Nidderdale Herald, 16th August 1902

THE FESTIVITIES IN HARROGATE.

Four-in-Hands (with men from the front and Athletic Clubs).

The Mayor of Harrogate (Councillor H. Milling) presided at a meeting of the subscribers to the local Coronation Festivities Fund last night.

The balance-sheet showed that there was £202 in hand, and eventually it was decided that £30 be spent in medals for Harrogate men still in South Africa (those who have returned having had medals presented to them). 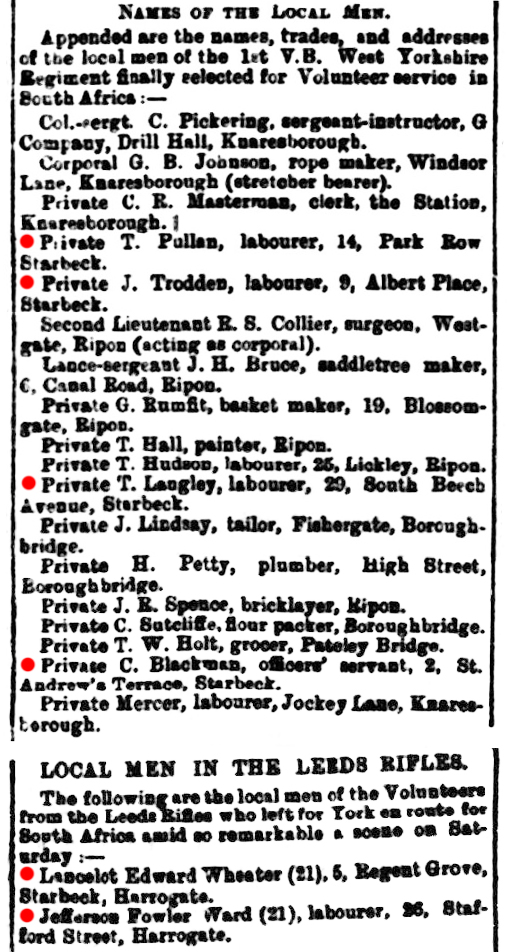 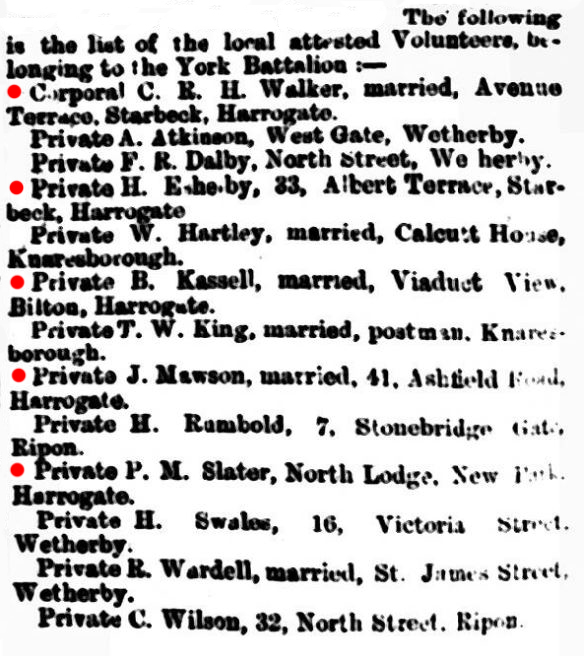 Private Slater does not appear to have sailed for the Cape. 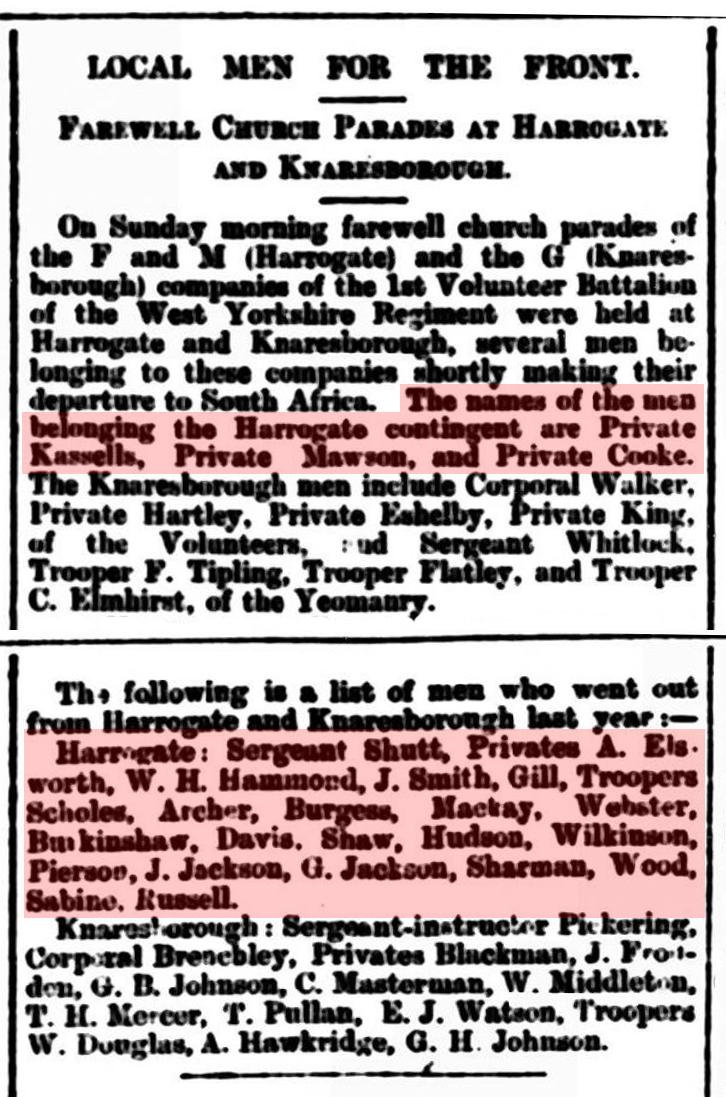 This list is rather muddled, with some of the Harrogate men (Privates Blackman, Eshelby & Pullan) listed under Knaresborough. 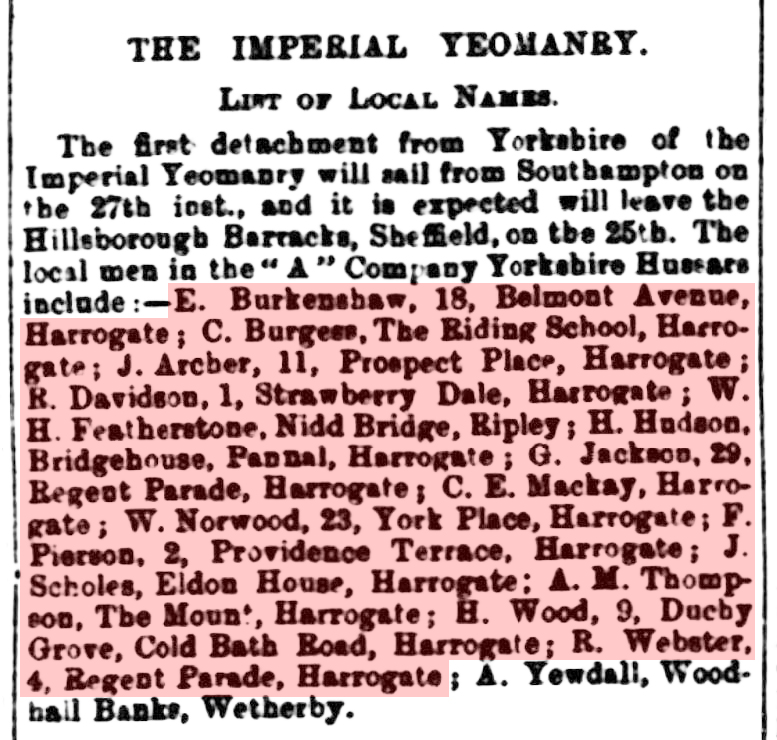 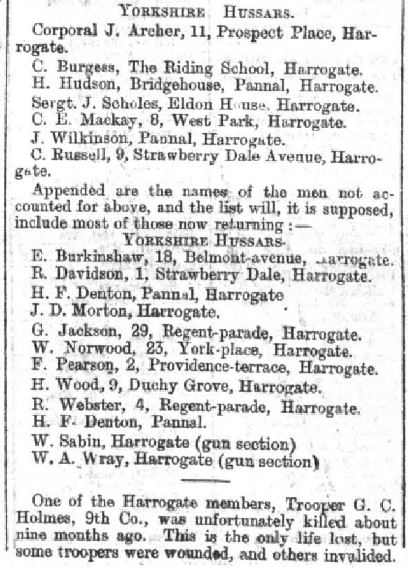 Harrogate Herald, 5th June 1901
"The following members of the corps have returned home since leaving England, most of them having been invalided".