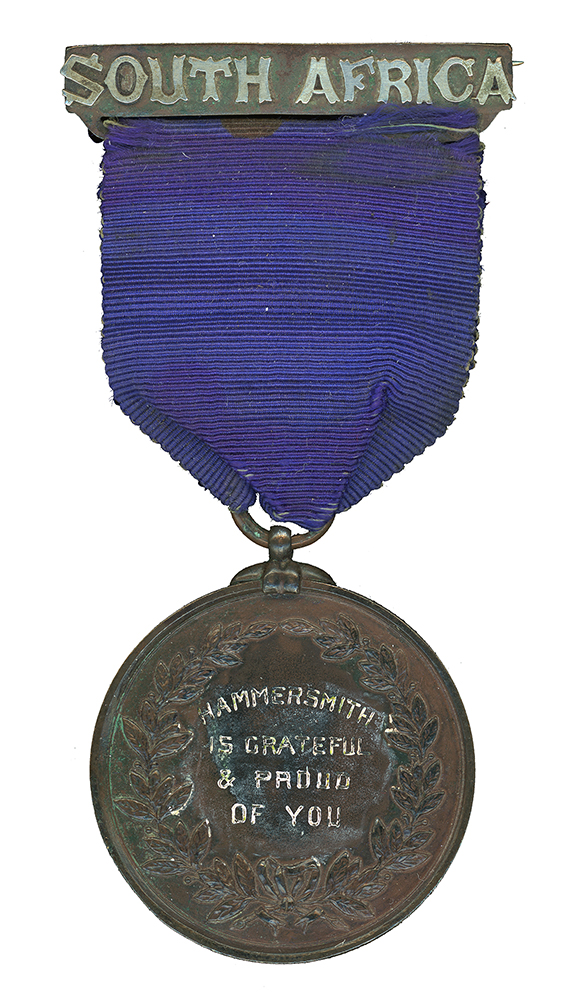 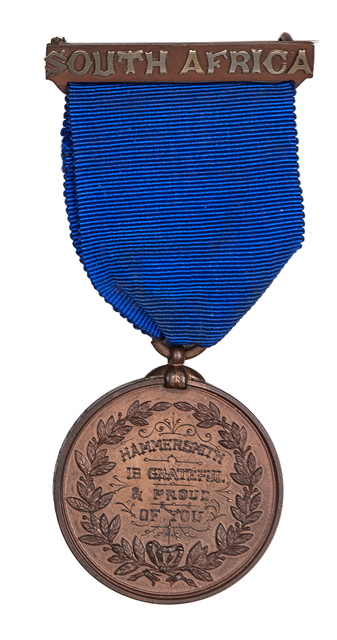 Bronze medals, and illuminated scrolls, to:

13141 Trooper Herbert Augustus BUDDEN (it was suggested that Tpr Budden should receive a medal because he was the local M.P.'s brother-in-law - did this happen?)

Presentation made by the Mayor, at Hammersmith Town Hall.

Presentation made by the Mayor at a fortnightly meeting of Hammersmith Borough Council.
KNOWN EXAMPLES HIGHLIGHTED IN GREEN
Obverse: "HAMMERSMITH / IS GRATEFUL / & PROUD / OF YOU".
Reverse: plain.

Medals issued unnamed with the instruction that they "should be returned for inscriptions to be put on them".

Mr F.C. Maitland suggested that it would be fitting that a scroll and medal should also be given to Mr BUDDEN, who had served in the Imperial Yeomanry, who although not a resident of Hammersmith was a brother-in-law of Mr W.J. Bull, M.P.

A large and representative gathering took place at Hammersmith Town Hall on Monday evening, when the C.I.V.’s and other Volunteers, belonging to Hammersmith, who have served in the South African campaign, were entertained to a banquet. …….

The Mayor next said that he had now to propose the toast of the evening, that of “Our Guests”. He was sure they were very pleased indeed to see these gentlemen once more in the parish of Hammersmith. (Applause). They had been across the sea, and had been boing duty in South Africa, and he had not the least doubt that they had done everything they had been called upon to do. They were very pleased that they had come back again looking so well. If they went by their bronzed countenances they might think they had had an enjoyable time, but he was afraid that they had not had such an enjoyable time as they had that evening. He was quite sure if called upon to go out to foreign climes again they would only be too pleased to do so. They had done their duty, and they knew if called upon again they would do the same. They heartily welcomed them. He was sure that they were pleased to see so many of them. He thought the way Hammersmith had been to the front showed that they had done their duty, and would do their duty again. (Applause). He endorsed the sentiments Mr Bull had uttered, and said they welcomed them back to their friends in Hammersmith. He hoped to meet them on many more occasions. (Applause).

Mr Graves, the Hon. Secretary, then announced that, on behalf of the borough of Hammersmith, presentations would then be made to the Volunteers who had been to the front, consisting of a scroll and a bronze medal. He asked that the medals should be returned for inscriptions to be put on them.

The Mayor then made the presentations, the recipients being loudly cheered.

Each medal is surmounted with the words “South Africa”, and has a blue ribbon attached. The illuminated scroll is in the following terms – “Borough of Hammersmith. Chamberlen, Mayor. At a banquet, held at the Town Hall, on Monday, 10th December, 1900, his Worship the Mayor presiding, supported by William J. Bull, Esq., M.P., L.C.C., members of the City Imperial and other Volunteers living in the borough were entertained by their fellow citizens in honour of their patriotism and gallantry during the South African war, of 1900. A medal was handed by the Mayor as a souvenir of the occasion. – Thomas Chamberlen, Mayor; S. Wood Graves, Hon. Secretary”. The scroll also contains a roll of honour and the names of the Committee.

Mr F.C. Maitland suggested that it would be fitting that a scroll and medal should also be given to Mr BUDDEN, who had served in the Imperial Yeomanry, who although not a resident of Hammersmith was a brother-in-law of Mr W.J. Bull, M.P.

The Mayor said he had no doubt that the Committee would take the suggestion into consideration.
West London Observer, 12th April 1901

At the fortnightly meeting of the Hammersmith Borough Council on Wednesday evening, the Mayor (Councillor T. Chamberlen) presided. …….

PRESENTATION TO A C.I.V.

The Chairman stated that a letter had been received from Mr Graves, asking that a presentation should be made to a C.I.V., who had returned from South Africa, in open Council.

It was agreed that the presentation should be made.

Mr Graves said it afforded him the greatest pleasure to introduce one of their citizens (Lance-Corporal HADLEY), who was a C.I.V., and was fighting for his country in South Africa when they held the banquet at the Town Hall, joining General Baden-Powell’s police. He asked the Mayor to make a presentation to him.

The Mayor said he had the greatest pleasure in presenting a certificate and medal to Lance-Corporal HADLEY. He was sorry he was not present when the others received theirs, but no doubt he was doing his duty in South Africa. He congratulated him on looking so well. No doubt if called upon he would be ready to do his duty again. (Applause).

Lance-Corporal HADLEY, it may be mentioned, before proceeding to South Africa, belonged to H Company of the South Middlesex Rifle Volunteers. He was invalided home from an attack of enteric fever.