Presentation made by Mrs Young (wife of Provost Young), during a public banquet in the Town Hall.

Presentation made by Provost Young, in the Drill Hall.

"Several of the men were absent, some of them being still in South Africa .... We are asked to state that the Volunteers who did not attend the presentation can, by calling personally, or any of their friends, receive their medals at the Town Clerk's office" (Elgin Courant, 21/11/1902).

"The Elgin coat of arms occupies a prominent place in the centre. Engraved on the garter surrounding the shield is the legend 'South African War, 1900-1'. On the reverse side there is engraved the name of the recipient, surrounded by the legend 'Elgin City Badge'" (Elgin Courant, 24/05/1901).

With a distribution of sixty, one would have expected a few of these to have surfaced over the years. However, as yet, I have been unable to find any record of an extant example.

ENTERTAINMENT TO THE ELGIN VOLUNTEERS.

THE Elgin members of the First Service Company of the Seaforth Volunteers who have just returned from the front were entertained to a public banquet and a conversazione, and presented each with a badge, subscribed for by the people of Elgin, in the Town Hall on Wednesday evening last. The Volunteers, who were accompanied by Mr George C. SOUTER, a member of the Natal Mounted Border Rifles, and who stood the siege of Ladysmith, were under the command of Captain W.C. REID, and all wore khaki. Lord Provost Young presided at the banquet, and the croupiers were Bailies Christie, Ramsay, and Forsyth. The guests of the evening were – Captain REID, Sergeant WATT, Corporal PATERSON, Lance-Corporal ALLAN, Lance-Corpl. SCOTT, Drummer MORRISON, Privates W. GOW, W. ANDERSON, P. CAMPBELL, Henry SHEWAN, John SUTHERLAND, John LOGIE, J. McBEAN, T. WARDLAW, and G.C. SOUTER. …….

……. Meanwhile I [Provost Young] will go to another part of the day’s function, and that is to present you with gold badges, which the community of Elgin and vicinity have most willingly and handsomely subscribed for, as a memento of your South African campaign. For myself, I look upon them as perfect little works of art. I trust you will value them highly and treasure them faithfully till your latest day, and, where you have families, hand them down as heirlooms – (cheers). As compared with it, the rest of the doings of today will soon be forgotten; Mr Austin’s banquet will soon be forgotten in oblivion, but these badges will remain and be a fitting memento of the occasion – (cheers). Before calling on my wife to hand them over to you, I may mention that one of our lads in khaki is our fellow-townsman, Mr George SOUTER, who took part in the earlier stages of the war, and stood the siege of Ladysmith, and altogether showed his fitness to be a Moray soldier – (cheers). I am very glad to have the opportunity of associating him with us this afternoon.

Mrs Young then presented the badges to each of the men, amid cheers.

Provost Young, continuing, said that they did not forget the absentees, Captain JOHNSTON and Corporal DOW – (cheers).

Treasurer Jameson [said] the medals were valuable in themselves, and would be enhanced in value as time went on.

The badges presented to the Volunteers were designed and supplied by Messrs J. and F. Anderson, jewellers, Elgin. Though simple, they are exceedingly chaste in design. The Elgin coat of arms occupies a prominent place in the centre. Engraved on the garter surrounding the shield is the legend, “South African War, 1900-1”. On the obverse side there is engraved the name of the recipient, surrounded by the legend, “Elgin City Badge”. Altogether it makes a very appropriate memento of an historic occasion.
Aberdeen People's Journal, 22nd November 1902

On Wednesday, in the Drill Hall, the members of the two Elgin Companies of the 3rd V.B. Seaforth Highlanders who served in South Africa in the Second and Third Service Companies of the battalion, were presented with artistic gold badges subscribed for by the members of the Town Council and community generally. Lord Provost Young presided, and explained there had been delay in the matter owing to the unexpected return home of the Companies. He also referred to the favourable record which the Companies had earned when on active service. Each of the medals bears the recipient’s name and the town arms.
Elgin Courant, 21st November 1902

PRESENTATION OF MEDALS TO SEAFORTH VOLUNTEERS.

ON Wednesday evening in the Assembly Rooms, Elgin, Lord Provost Young presented twenty-five men of the 2nd and 3rd Morayshire Service Companies of Volunteers with gold medals, subscribed for by the members of the Town Council and the citizens of Elgin. There was a good attendance …….

……. The Provost, addressing the men, said that they were met that evening for the purpose of presenting them with gold medals in commemoration of their services in South Africa, and he was very pleased, and felt it a great honour, to be the mouthpiece of the community on that occasion – (applause). As they were aware, the men of the First Service Company, which was composed of two contingents, on their return from the seat of war were presented with similar medals as that proposed to be handed to them that evening, and they felt that it would be only fair and right that they (the members of the Second and Third Service Companies) should be treated in a similar way. The idea was taken up and carried out. There had been considerable delay in the matter, owing, in the first instance at all events, to their coming upon them rather unexpectedly. They had come down upon them in a heap, and they would remember that they had the pleasure of meeting them at a little treat. They could do nothing at that time in decorating them with medals, but they promised them they would get them. The medals were there now, and better late than never – (applause). The initiatory steps were taken in the matter by the Town Council, and it was a source of great pleasure to him to be able to tell them that the members of the Town Council – without an exception – had subscribed to the list – (applause). Through the good offices of his friend Treasurer Jameson – who he was pleased to see present – along with other members of the Council, the sum subscribed by the Council was supplemented by contributions from the outside public, and to that was added a small sum from the Common Good. So they might take it from him that they might look upon these medals as gifts from their fellow-citizens, and presented to them in testimony of their high approval of their conduct in coming forward as volunteers so readily in their country’s hour of need – (applause). …….

The Provost then said that ended the interesting ceremony.

We are asked to state that the Volunteers who did not attend the presentation can, by calling personally, or any of their friends, receive their medals at the Town Clerk’s office. 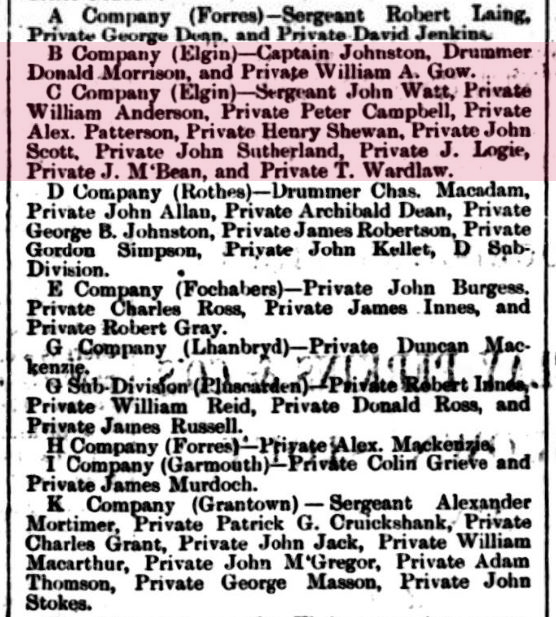 Banffshire Journal, 11th February 1902 (Elgin Volunteers selected for service with the 3rd V.A.S.C.; Privates J.O. FORSYTH and H. STEWART do not appear to have embarked)