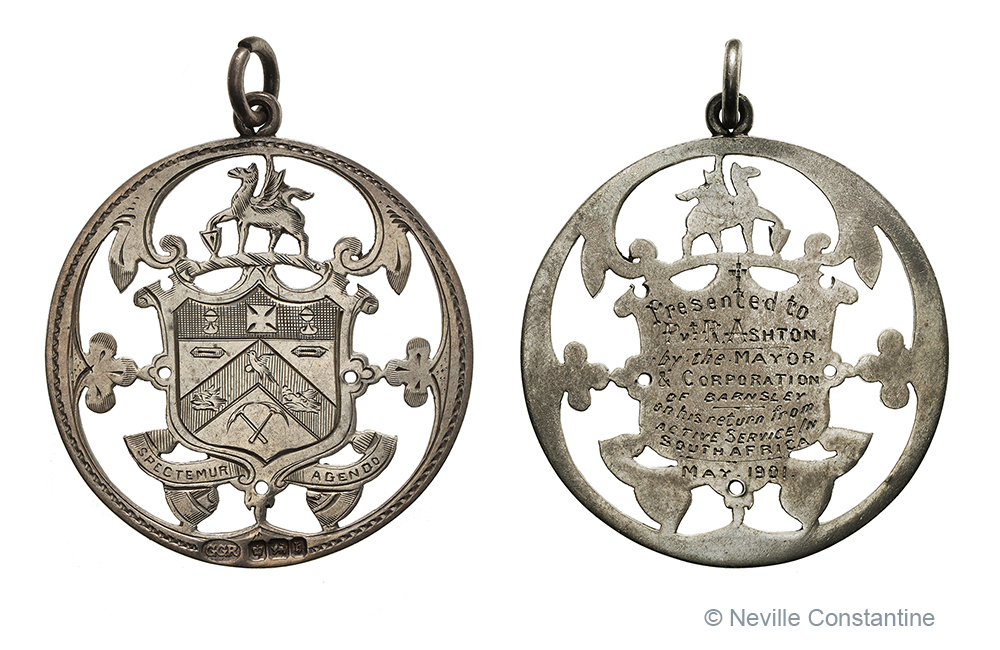 Silver (incorrectly described as "gold" in the Sheffield Daily Telegraph) medals, to:

Presentation made by the Mayor (Dr John Fletcher Horne), in the Drill Hall, Barnsley.

The Barnsley volunteers and reservists who have returned from active service in South Africa were last night entertained to a banquet in the Drill Hall by the Mayor (Dr J. Fletcher Horne) and members of the Barnsley Volunteers Reception Committee. All the volunteers and reservists, khaki clad and otherwise, were present, and amongst the company were the Rev. B.T. Barnes (chaplain), Aldermen Wilkinson, Wray, and Taylor, and most of the members of the Town Council, Major Senior, Captains Fox and Muschamp, Lieutenants Hewitt and Lancaster, Sergeant-Instructor Broderick, Mr W. Carrington (magistrates’ clerk), Mr H. Elgey, Mr R. Bury, Mr Chas. Plumpton (hon. secretary of the Barnsley and District Patriotic Fund), Mr H. Horsfield (Town Clerk), etc.

The room had been very prettily decorated for the occasion, the catering by Councillor Foulstone was excellent, and the proceedings from first to last were remarkably successful. An interesting feature of the proceedings was the presentation to the returned volunteers of gold [sic] medals, inscribed: “Presented to _______ by the Mayor and Corporation of Barnsley, on his return from active service in South Africa. May, 1901”, and having on the other side the borough arms, with its motto – Spectemur Agendo – “Let us be known by our actions”.

The loyal toasts were given from the chair, after which Alderman Wray gave “The Navy, Army, and Volunteers”, and doing so, quoted from Othello: “I have done the State some service, and they know it”. That was what they said of the brave and sacrificing men whom they delighted to honour that night. Our gallant tars in the time of need became as horses to their own guns, and under their gallant leader, Captain Lambton, dragged the ordnance overland, relieved Ladysmith, and proved that there was nothing which English pluck had ever done which British pluck was not still ready to do. Our soldiers were the finest army in the world, and he spoke after seeing the soldiers of the European Continent. The volunteers they were especially proud of. The Reservists, trained to soldiering, held themselves ready to serve their country at any moment, and the volunteers showed them that the pluck and patriotism of the people of this country was as it had ever been – invincible, and never to be beaten. They should never, he hoped, find any dearth of that pluck in this country; English pluck would ever come to the front, and he must heartily come to the front to for the honour of the old England and the welfare of their glorious Empire. (Applause).

Major Senior replied, and said that he was glad indeed that Alderman Wray held it the duty of every man to serve his country to the best of his ability. He had been delighted with Alderman Wray’s speech, and knew that he would fight as vigorously for his country as anybody in the land. He was proud to be a volunteer, to have served 25 years, and to have been able to see such services rendered by the volunteers in the country: and by the brave fellows who had gone from the Barnsley detachment and districts, both those who had returned and those who were still at the front – 15 in number. He thanked Alderman Wray for his speech, and had intended to compliment him upon it.

Lieutenant Hewitt also spoke in reply to the toast, and referring to the volunteers, said it had been said of them that they had been to the war and had a grand picnic, and would have done something if it had been there for them to do. The diary of a volunteer, however, showed a magnificent record of sterling soldiers’ work done by the Yorkshire volunteers, including the men of Barnsley. They left Barnsley on the 7th February, 1900, and they were at Nicholson’s Nek, Modders Spruit, Elandslaagte. On the 10th April they were first under fire, with their guns, and the second Boer shot killed two of the West Yorkshires, and the next shell took a soldier’s leg off, and he “swore”. (Laughter). They were in the fighting about Johannesburg, for weeks they were on outpost duty, they were at Grobner’s Farm, at Wessel’s Nek, where two shells burst between two Barnsley volunteers – Privates ASCOUGH and ASHTON – but without injuring either, and each of them had a piece of it, which was better than if it had been inside them. (Applause). Both the volunteers and reservists had done their duty bravely and they most cordially welcomed them on their return. (Applause).

The Mayor gave “Our Guests”, and said no previous Mayor had ever known such a privilege as he had that night. The composition of the army which had been sent to South Africa, English, Scotch, Irish, Canadians, Australians, had been an object lesson to the world. There had been a time when England felt disgraced in South Africa, but what were their feelings when the volunteers in battalions came forward to fight for King and country, and none came forward more proudly than the men of Barnsley. They had fought side by side with the regular army. Might Barnsley ever have such men to come forward – courageous, capable, true. (Applause). He recognised most cordially the services of the reservists who had gone from this district, who had done their duty nobly. He hoped something would be done for the wives and children of the men who had shed their blood for the honour and welfare of their country. Their volunteers had lost Private BELL; the reservists had lost several members, POTTER, CLITHEROE, JAQUES, PERRY, BARNES, and JAMES. He hoped something would be done to keep their memory green. He hoped the picnic, as they had heard it called, would soon be brought to a close, and that it would be followed by a glorious peace, for the good of this country, South Africa, and the Empire as a whole. (Applause).

Private BROOKS, on behalf of the reservists, said all through the campaign the reservists and the volunteers had been practically always in the front rank of pioneers. No harder work had been done by any army of this country since the Crimea, and he cordially thanked them for their welcome home and entertainment, and referred in eulogistic and highly appreciative terms to the work of the Barnsley and District Patriotic Fund.

Councillor Wells gave “The Committee”, and Ald. Wilkinson replied, and referred to the good work of the reserve fund.

Mr C. Plumpton, hon. secretary of the Patriotic Fund, was called upon, and loudly cheered. He said the fund had done good work, but the charges upon it had almost exhausted it, and there would have to be a further appeal to sustain the 70 dependents still on the fund. They had also six widows and seven orphans dependent upon them, and he hoped there would be no slackening until every responsibility had been fulfilled and every want met.

Captain Muschamp gave “The Chairman”, for whom, and for other gentlemen, loud cheers were given, and the Mayor briefly replied.
Barnsley Chronicle, 30th August 1902

BANQUET TO THE RETURNED VOLUNTEERS.

PRESENTATION OF THE CORPORATION MEDALS.

On Friday night the Barnsley Volunteers who returned from South Africa, and who were so enthusiastically welcomed when they came home, were further honoured by being entertained by Captain Fox and Captain Hewitt to a banquet at the Drill Hall. On this, as on previous occasions, patriotic fervour was displayed on all hands. The room in which the function took place was attractively decorated with escutcheons and innumerable Union Jacks, rendered more effective by a few pictures of the King and distinguished military generals. The guests of the evening occupied the centre of the room. Most of them were khaki-clad, and while looking in the best of health, their bronze faces and hands still told stories of South African experiences. When they so bravely volunteered their services for the Front, they knew what it was to participate in sham fights and the like, but their conception of the manoeuvres of war in reality was practically nil. Now, however, having all returned (with the exception of the unfortunate one who fell a victim of enteric fever) they will never forget the things they saw and did in South Africa, and those at home – the wife and family who have been kept cared for by the Patriotic Fund Committee and their supporters, during the breadwinner’s absence – will long listen with deep attention to the interesting stories of the great war which the home-comers relate to them. They have done all that was required of them, and whether it be great or small – on the kopje, in the thick of the fight, or in some out of the way spot, where a shot, shell, or bullet seldom buzzed, they have served their country right loyally, and deserve all honour for it.

……. The loyal toasts were duly honoured, and the band played the National Anthem. …….

……. At this juncture, the Mayor presented medals in cases (with the inscription “Presented by the Mayor and Corporation of the Borough of Barnsley to _______ for services rendered during the South African War, August 22nd, 1902”) to the returned Volunteers who were Sergt. JONES, Lance-Sergt. WORTH, Corpl. DARREN, Lance-Corpl. PEARSON, Privates BYRNES, EVANS, ALDERSON, SOWDEN, ASHTON, APPLEYARD, SARGEANT [sic], CROSSLAND, JACKSON, HAYWOOD [sic], DUNN and WARD.