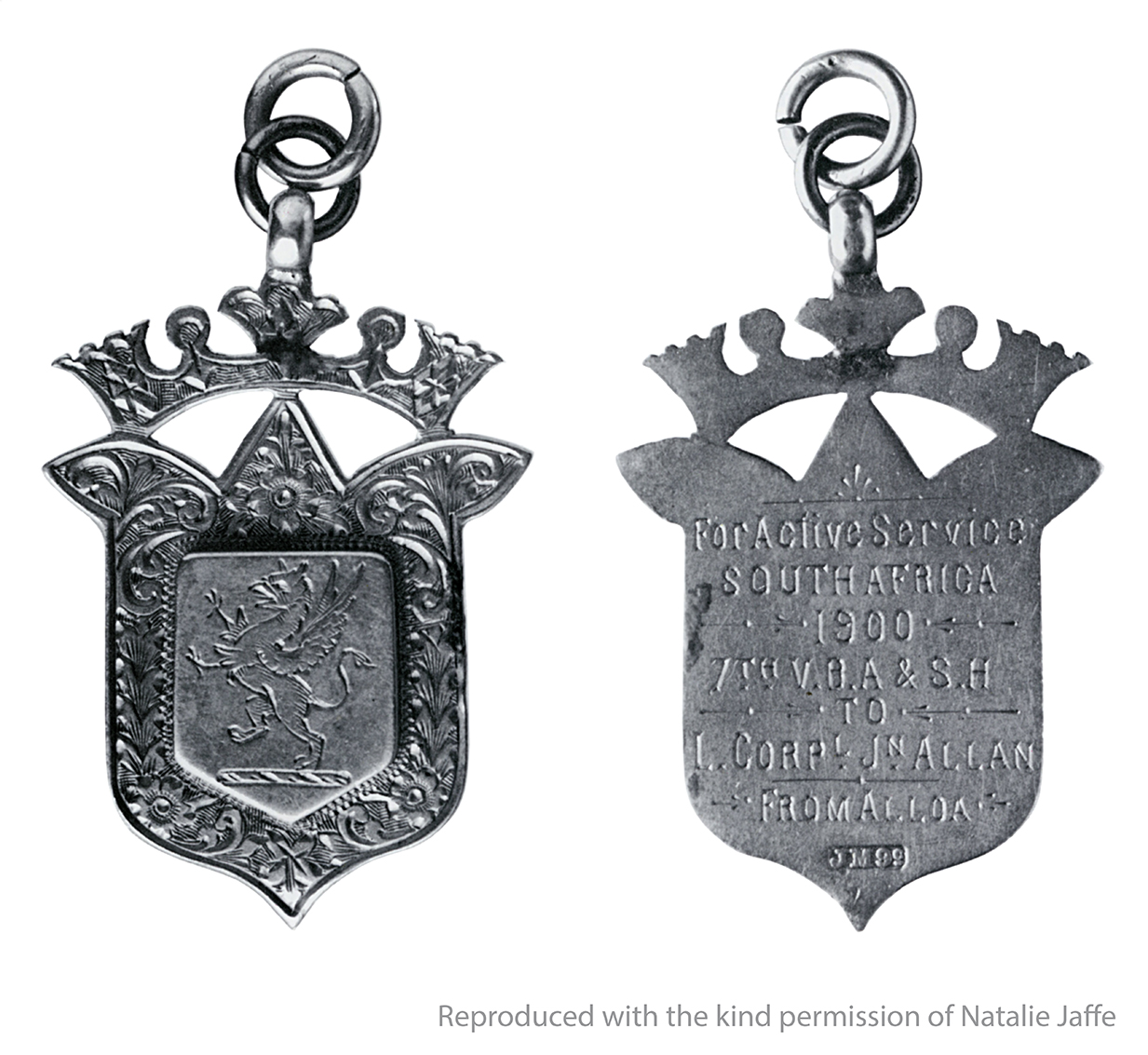 Gold or silver medals, to:

Presentation made by Provost Grant, in the Municipal Buildings, Alloa.

Private Allan received a second medal in 1902 from Alloa Volunteer Officers. It is likely that Privates A. Fyfe and A. Mercer were treated in a similar manner.

"Trooper Carmichael has also been presented with a gold badge similar to those given to the local volunteer contingent going to the front".

Note: it is unlikely that this was an official tribute from Alloa Council, as the badges were for volunteers only.

Presentation made by Colonel Moyes, in the Drill Hall, Sauchie.

Described as: "gold badges, with red, white and blue ribbon attached. On the one side is the regimental crest, and on the other the inscription – 'For active service, South Africa, 1900'".

Presentation made by Provost Grant, in the Drill Hall, Alloa.

NOTE: These six medals were apparently made of silver, unlike the gold ones given before and after. It seems that on this occasion the Council lacked funds: they were unable to purchase gifts for all 17 Volunteers, and those medals that they did present were inferior. The eleven members of the contingent who did not reside in Alloa received their medals from the officers of the battalion, and these were made of gold. Similarly, when the 3rd V.A.S.C. set sail, it was the officers that stepped forward and purchased gold medals (see Alloa - Volunteer Officers).

Presentation made by Dean of Guild Cousin, on behalf of Alloa Town Council, in the Drill Hall, Alloa.

Again, a lack of funds meant that the Town Council only provided medals for cyclists from Alloa. The remainder received theirs from the Volunteer Officers.

Description in the Alloa Advertiser (05/05/1900): "gold badges, with red, white and blue ribbon attached. On the one side is the regimental crest, and on the other the inscription – 'For active service, South Africa, 1900'."

On Thursday afternoon the men of the 7th V.B. Argyll and Sutherland Highlanders, who have been selected from the various companies and accepted for military duty at the theatre of the war in South Africa, arrived from Stirling with the 5.20 p.m. train, and marched to the Drill Hall under the command of Sergeant Stephen HENDERSON. A public meeting was held in the Town Hall for the purpose of presenting the men with medals as souvenirs of the occasion. The hall was simply packed, every available corner being occupied. The platform was gaily decorated with flags and banners, and presented a pleasing appearance. Mr Lewis, the burgh organist, played appropriate selections while the audience was assembling, these including “Rule Britannia,” “National Airs,” “Soldiers of the Queen,” “Tommy Atkins,” “Absent-minded beggar March,” “The Old Brigade,” and Mendelssohn’s majestic war march from “Athalie.” The local companies of the Volunteer Battalion turned out in large muster and accompanied the men to the hall, where they filed up along each side of the hall, under Captain Moyes and Lieut. Muir respectively. Provost Grant presided, and was accompanied to the platform by the Earl of Mar and Kellie, Colonel Moyes, Major Dobie, etc. …….

……. The men for the front were also seated on the platform, and as they entered the hall they were enthusiastically received, the vast audience rising to their feet and lustily cheering for several minutes. The names and companies of the men are as follows :-

The men presented a very smart and soldierly looking appearance in their kilts and red coats. …….

……. The Provost thereafter said – My Lord Mar, Col. Moyes, ladies, and gentlemen, men of the Argyll and Sutherland Highlanders, I have great pleasure in presenting to you these medals which you have heard of from Mr Murray. They are to you a token of the feelings of the ratepayers of the burgh of Alloa, who appreciate the readiness with which you have responded to your country’s call for men for the front. The medals show on one side the Burgh Arms and on the other your name and date of presentation is engraved. I may here add that it is the wish of everybody that you may be spared to return to your native home, and that this medal may be treasured as a souvenir of the most eventful war that has ever happened in the nation’s history. One would think that the eloquent writer of other days had anticipated the crisis in our national history, who said that should occasion rise – should the dire necessity come – a hundred thousand British artisans and workmen were ready to rise at the call of duty, to sacrifice their lives for the honour of their country, like the heroes of old – like that noble four hundred who sleep beneath the Heights of Alma with the cross of honour for their victory. (Applause.) He concluded by calling upon the Rev. George Murray to address the meeting …….

……. [The medallions were designed and supplied by Messrs R. Strang & Son, jewellers, Mill Street, and were on view in his window in the early part of the week.]

ENTHUSIASTIC SEND OFF TO VOLUNTEERS. –

Last night an interesting presentation function took place in the Drill Hall, Sauchie. Privates James FYFE and James FRASER, of B Company (Sauchie) of the local Battalion of Volunteers, who have been selected for active service, were honoured by their late fellow Volunteers. Major Stewart presided over a large audience, and in the course of the evening Colonel Moyes, Commander of the Battalion, in a neat little speech presented their guests with gold badges, with red, white and blue ribbon attached. On the one side is the regimental crest, and on the other the inscription – “For active service, South Africa, 1900”. Refreshments were afterwards served out, and the evening was pleasantly spent in song and sentiment. At a later stage the men were accompanied to the Station by B Coy. and several officers of the Battalion, who were present during the evening, and the Pipe and Bugle Band of the Battalion. At the Station the men were enthusiastically cheered as they went off to Stirling. We understand the men will leave for the front in a few days.

Last night Lieutenant ROSS and the seventeen men of the second service company 7th Volunteer Battalion Argyll and Sutherland Highlanders were entertained to supper in the Victoria Hotel, Alloa, by Colonel Moyes, the commanding officer, and officers of the battalion, and subsequently banqueted in the Drill Hall, when the men were presented with commemorative medals, six being the gifts of Alloa Town Council, and the others from officers of the battalion. Lieutenant ROSS received a revolver from his brother officers.

……. The Provost then presented SILVER medals, suitably inscribed and encased, to the following :-

The men were loudly cheered as they marched to and from the platform …….

……. The following are the names of the men who received GOLD charms :-

At one time it certainly looked as if Lieutenant ROSS and the 17 men of the County Battalion, who had volunteered for active service in South Africa, were to be allowed to leave the district without any public recognition, but thanks to Colonel Moyes, and the other officers of the Battalion, such an act of unpatriotism has happily been avoided. In another column an account is given of the hearty send-off which the gallant young fellows received on Tuesday evening. They were first of all entertained to supper by the Battalion officers, and subsequently banqueted in the Drill Hall, and presented with commemorative medals. At both functions, and especially the latter, there was no lack of demonstrative enthusiasm. The healths of the men were duly honoured, and befitting public recognition made of their gallantry in voluntarily exchanging the comforts of home for the hardships and dangers of the battlefield. The general public also showed appreciation of the men’s gallant conduct by turning out in large numbers, despite the inclemency of the weather, and accompanying them from the Drill Hall to the Station, where the parting god-bye was one of the most hearty and intensely enthusiastic that could well be imagined. Lieutenant ROSS and his men will doubtless long remember the popular demonstration of enthusiasm which characterised their departure from Alloa, preparatory to their embarkation for South Africa.

Last night the 16 volunteers from the 7th Volunteer Battalion Argyll and Sutherland Highlanders who have volunteered for active service with the Scottish Cyclists’ Corps in South Africa were banqueted in the Victoria Hotel, Alloa, by the officers of the battalion. Thereafter a public presentation took place in the Drill Hall, which was packed to the door. Ten of the men drawn from the Alloa companies received gold badges from Dean of Guild Cousin on behalf of Alloa Town Council, and the six from the other companies of the battalion also received gold badges, the gifts of the officers of the battalion. Speeches were made by Colonel Moyes, commanding; Mr George Younger, Convener of the County (who proposed the health of the men); and by the Earl of Mar and Kellie, Lord Lieutenant of the County and Honorary Colonel of the Battalion. Afterwards the men left for and had an enthusiastic send-off at the station.

ENTHUSIASTIC SEND-OFF TO CYCLISTS FOR THE FRONT.

On Wednesday evening, the third quota of Volunteers from the 7th V.B. Argyll & Sutherland Highlanders to leave here for active service in South Africa were banqueted in the Victoria Hotel by the officers of the Battalion, and afterwards publicly presented with gold badges in the Drill Hall. The presentation ceremony took place at 7.30. …….

……. The Colonel concluded by calling upon Dean of Guild Cousin, who handed over beautiful gold badges to the men as follows:

Colonel Moyes proposed a hearty vote of thanks to Dean of Guild Cousin for presenting the badges – (cheers) – and requested him to convey to the Provost, Magistrates and Town Councillors the thanks of the Battalion and of the friends assembled that night for their kindness in providing the badges. (Cheers). Continuing, the Colonel said it would appear slightly unbecoming on their part were they to allow the other six cyclists, who were going to South Africa, to go without a badge, so the officers of the Battalion had arranged to present the badges to the other six members of the section. (Cheers). The badges were then handed to the men as follows :-

As the men stepped forward to receive their badges, they were warmly cheered by their friends in the hall. 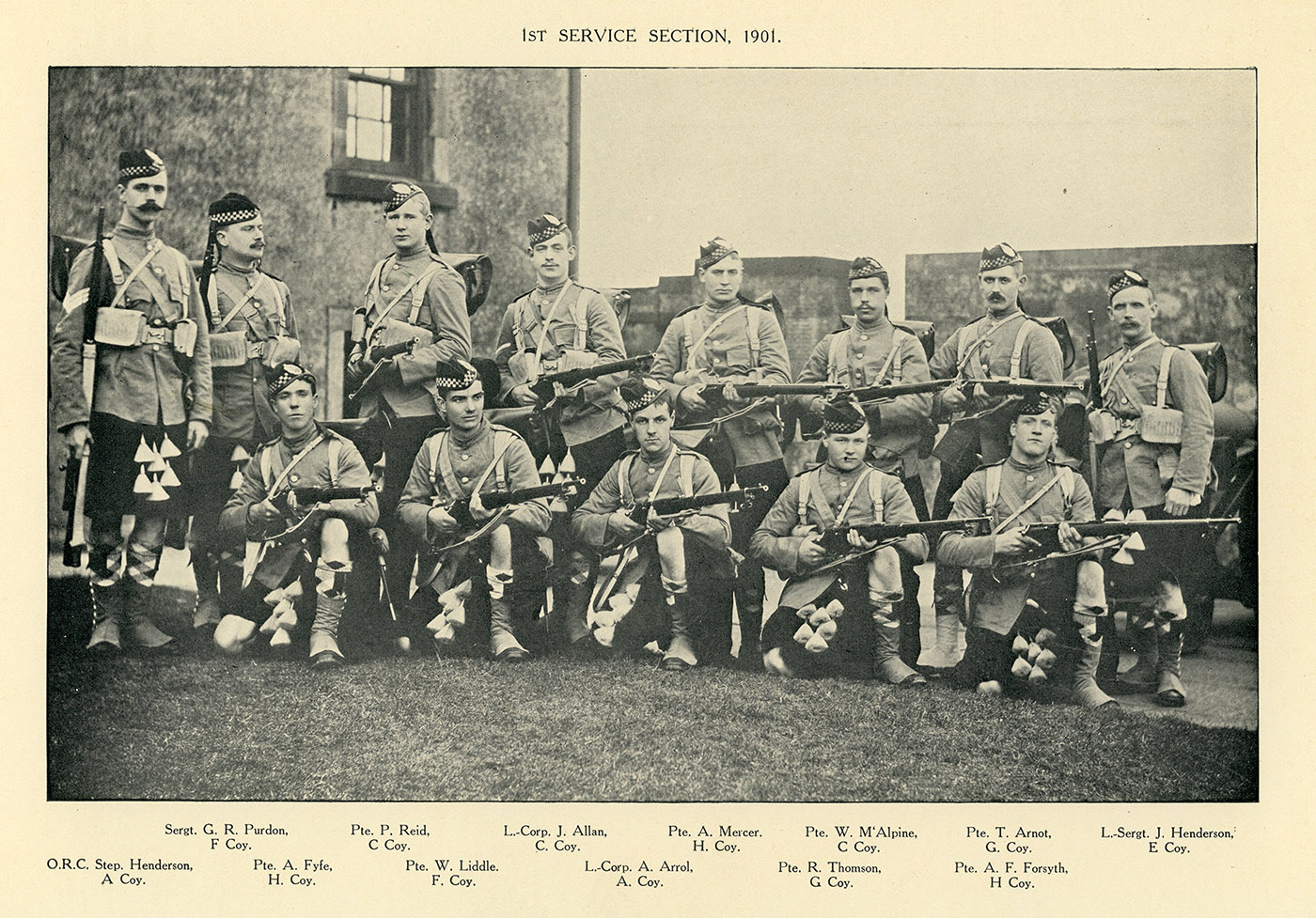 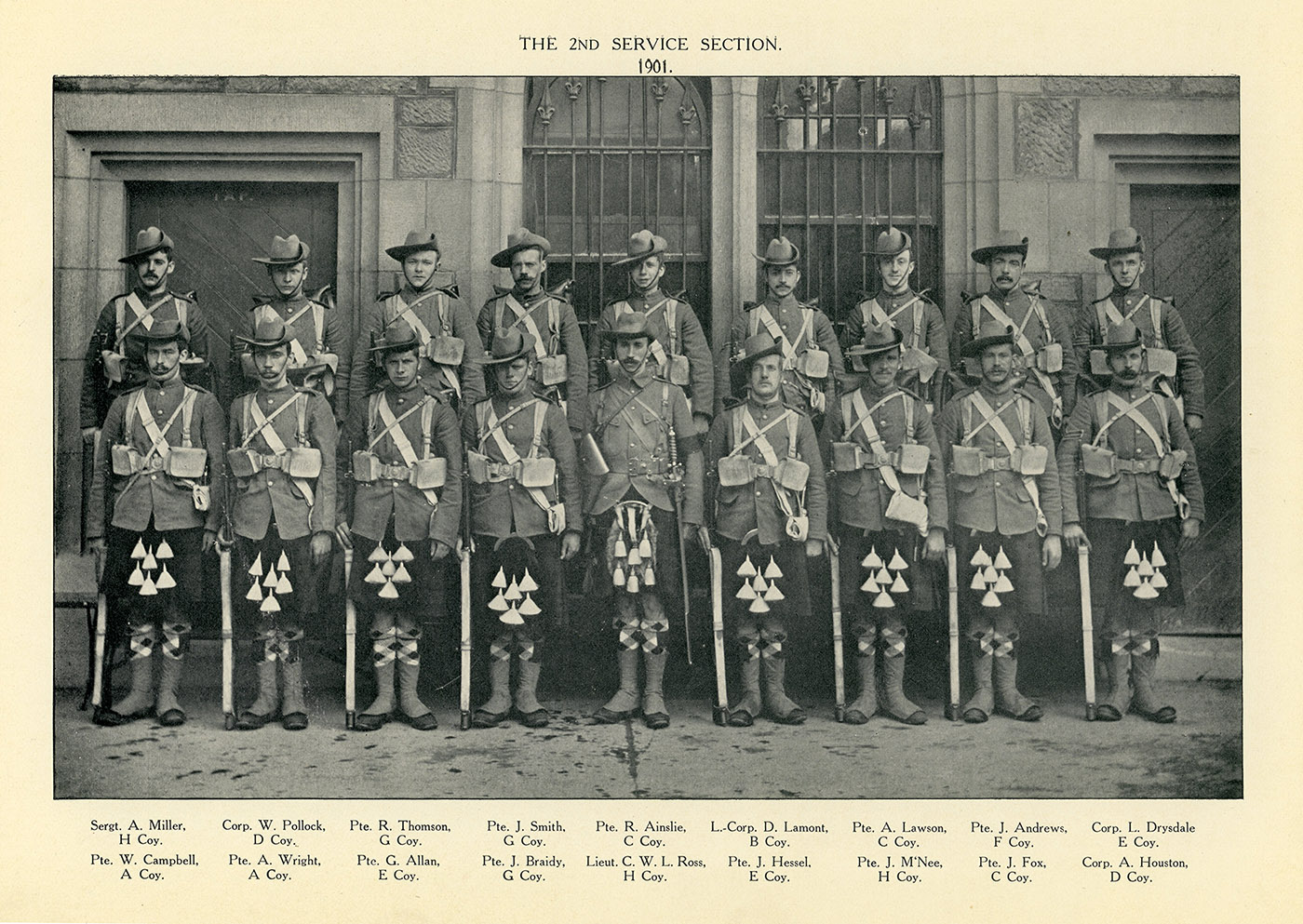 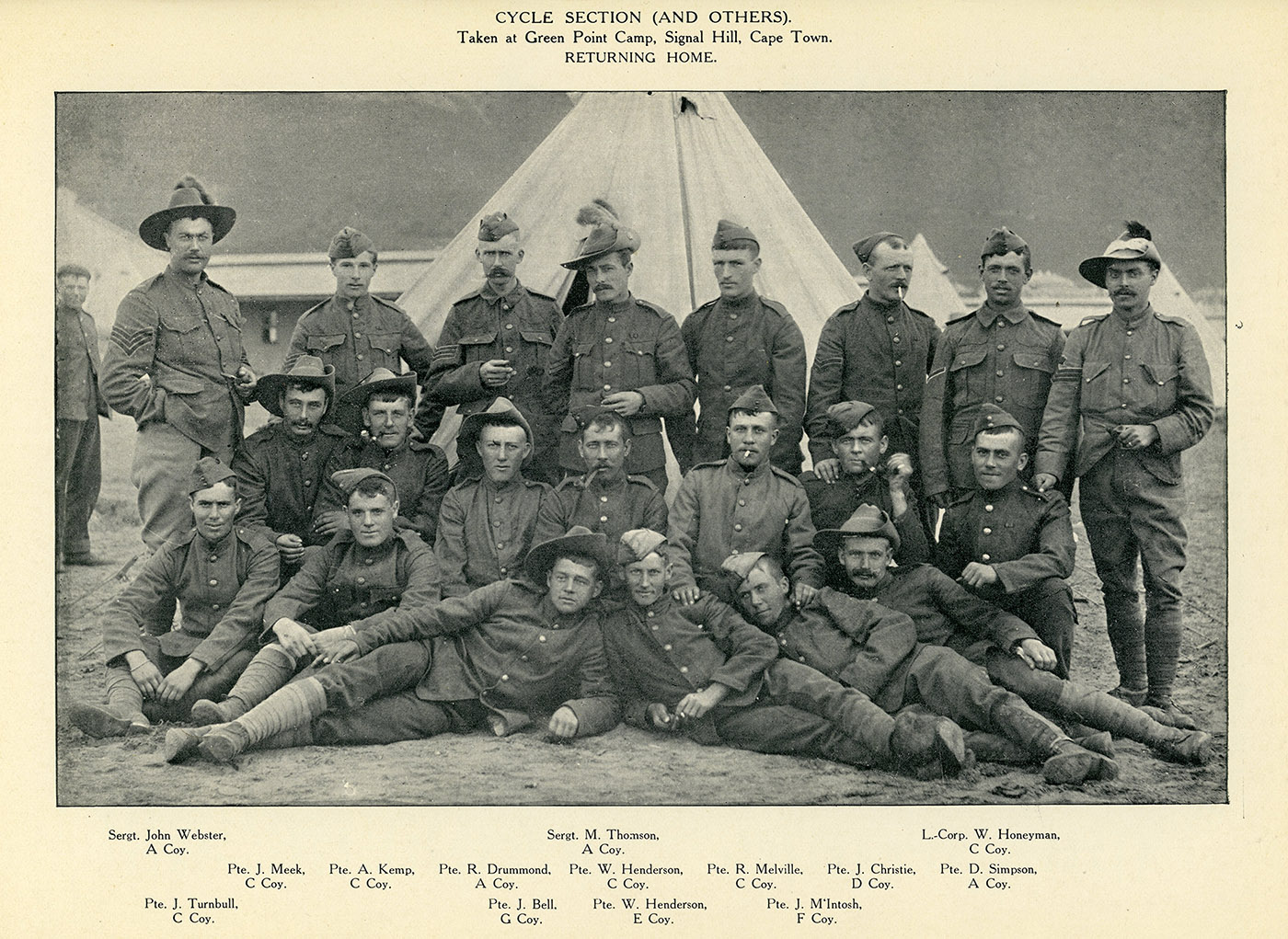