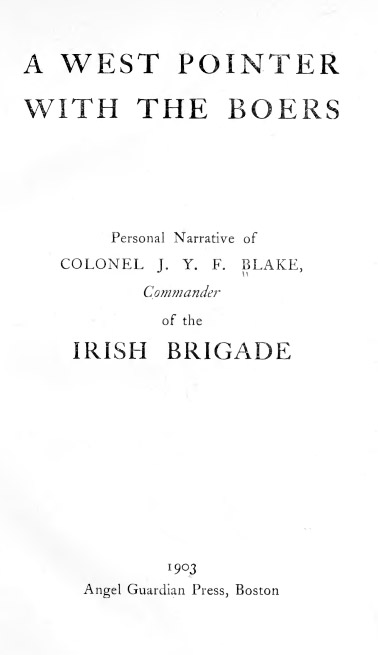 A WEST POINTER WITH THE BOERS

TO THE MEMORY OF THE
TWENTY-TWO THOUSAND
BOER WOMEN AND CHILDREN
MURDERED
IN THE
ENGLISH PRISON CAMPS
OF SOUTH AFRICA
DURING THE ANGLO-BOER WAR.
1899-1902

Friends have advised me to say a little something about myself, by way of a beginning, and to please them, I will commence with the statement that I was born in the State of Missouri, in 1856, and waked up on a horse and cattle ranch on the plains of Denton County, Texas. At least, here it was that I first saw light, as far as I can remember. As I grew up I learned to ride the Texas pony, and became fairly well acquainted with the character and habits of horses and cattle, by having, year after year, to look after them, and see that none strayed away. Happy were those days of loneliness and ignorance spent on those far-stretching plains, where roamed hundreds of thousands of horses, cattle and buffalo!

In 1871, my father started me to school at the Arkansas State University, at Fayetteville. In 1876, while still at the University, I received the cadet appointment to the U. S. Military Academy at West Point, through the kindness of Hon. Thomas M. Gunter, M. C., an old friend of my father. I entered the Academy in September, of the same year, and graduated in June, 1880. I was assigned as 2nd Lieutenant of the 6th U. S. Cavalry stationed in Arizona. I passed through the Apache wars, serving first under General Wilcox, then under General Crook, and lastly under Gen. Nelson A. Miles.

General Crook put me in command of the Apache Indian scouts, and with them I roamed about the mountains till 1885, when my troop was ordered to Fort Leavenworth, Kansas. I passed through the Infantry and Cavalry school, and, on being promoted to the rank of 1st. Lieutenant in 1887, was ordered to Fort Wingate, New Mexico Now General Miles put me in command of the Navajo Indian scouts.

The Indians remained quiet and peaceful on their reservations. Post life became monotonous, and I resigned in 1889.

I went to Grand Rapids, Michigan, to try my hand in business, but soon found that the "tricks of the trade" were too deep for me, so I made up my mind to go to South Africa, where the gold mining prospects were attracting adventurous men from every part of the world.

I wish the following pages to be considered as a simple narrative of some of the important events of the Anglo-Boer War and a very terse and unpolished narrative at that. I have endeavored to tell the truth in as brief a way as possible and, to speak the truth again, I believe I have been too brief in many instances.

Ordinary readers sicken of long military details of battles and I have purposely refrained from giving them. During the first nine months of the war, many American correspondents were present and I think they can give a pretty correct account of what happened during their time, and I don't believe my account will in any way conflict with any they may give. Among many whom I know, are Rev. Peter MacQueen, Richard Harding Davis, Mr. Unger, Mr. Hillegas, Allen Sangree and E. E. Easton, and such men as these will not lie because the English are happy to call themselves our "Cousins across the Sea."

Some criticism has been made of Captain Patrick O'Connor, Lieutenants John Quinn and Mike Enright, who were in charge of the Chicago Ambulance Corps, sent by Colonel John F. Finerty and Patrick J. Judge to South Africa to assist the Boers, for laying aside the Red Crosses and taking up the mauser. These were all good and true men and had the Boers asked them to do Red Cross duty, they would have willingly consented. But they were not needed in this line, so they were equipped for fighting.

At Spion Kop, General Buller had many of the ambulance men remove their Red Crosses and take the rifle during the battle. We captured several of these and they told the whole story. After the battle was over, all those not captured were required to pin on the Red Cross again and look after the numerous dead and wounded. If the English ambulance men could remove their Red Crosses and take up rifles at the pleasure of the British commander, I can't understand why the Boer ambulance men could not do the same.

I have not said as much about the English commanders of the war as I might have said; and now a word about them may not be taken amiss.

The Boers generally acknowledge General Buller as by far the ablest commander the English had in the field. True it is, he made mistakes on the Tugela, but it should be remembered that he had but 35,000 or 40,000 men to dislodge some 6,000 Boers intrenched for a distance of thirty miles along the river. Had Buller been in supreme command, I firmly believe the war would have been brought to an end within six months after the relief of Ladysmith.

Lords Roberts and Kitchener had treble the number of men, an open country and only about 4,900 Boers in front of them ; yet Buller relieved Ladysmith by the time they could relieve Kimberley.

In fighting negroes armed with sticks both Roberts and Kitchener were enabled to add a list of letters to their names almost equal to the number in the alphabet; but when confronted with an armed Boer, both found themselves practically helpless.

Roberts for his proclamations received from the British Government $500,000, and an earldom. Kitchener received $150,000 for wiping out of existence 22,000 women and children. It must be added, however, that he was simply carrying out Lord Roberts' instructions, to his great pleasure. Though degenerate and incompetent, yet the English soldier knows a little something. The 29th of September, 1902, was the King's Procession Day. I was present and witnessed the circus. Between Trafalgar Square and St. Paul's Cathedral, Lord Roberts was violently hissed and the people called for General Buller, who had done all the fighting and reaped disgrace as his reward. Roberts bit his lip but that is all the satisfaction he got.

There is no doubt about it, the English lords and generals in command of the British army are degenerate and incompetent and that, too, far more so than the English soldier. In hundreds of instances, I am quite sure had an English sergeant been in command, we would have been badly beaten where we gained successes. The English commanders had large numbers, but small brains

The quiet, modest little de la Rey, with his dancing, hazel eyes, was unquestionably the ablest of the Boer generals and the greatest man of the war.

The stalwart, restless, commanding General De Wet was the great strategist and Stonewall Jackson of the war. The handsome, refined and polished General Louis Botha proved a most brilliant commander and fighter, and another war will mark him as one of the brightest military stars of modern times. He is young and cool-headed and has in him all the necessary material to make a great military leader. May the time soon come for him to make use of his material.

Although the Boers had three such able leaders, yet the two little Republics lost their liberty and independence because the 25,000 patriots under their command thought it better to surrender and save their women and children and therefore their race from extinction. Horses, mules and men from the United States of America destroyed the two little republics.

We can always point with pride to our great liberty lovers, Washington, Jefferson, Madison, Adams, Jackson, Munroe, and Lincoln, but since the days of these great patriots and Americans our leadership has degenerated; trade and greed have taken the place of lofty ideals which made the country the hope and model of every people aspiring to freedom; vulgar ambition for territorial extension has put us on the low level of all the conquering nations of old; the late war with Spain developed all the latent greed of an ambitious upstart among nations; neither the plausible protestations of one president nor the open boldness of another justified our un-American policy in the far East.

When it came to the question of acting towards the republics of South Africa as our forefathers had acted towards the republic of Texas, neither the oily McKinley nor the vociferous Roosevelt showed the honor and courage of a pure-blooded American. I do not mean they were bought by England. Our State Department is not the kind of a courtesan whose favors have to be paid for in anything but smiles and flattery. England smiled and flattered and America smiled back as she strangled the liberties of a brave people. The Philistines captured Samson, thanks to the American Delilah.