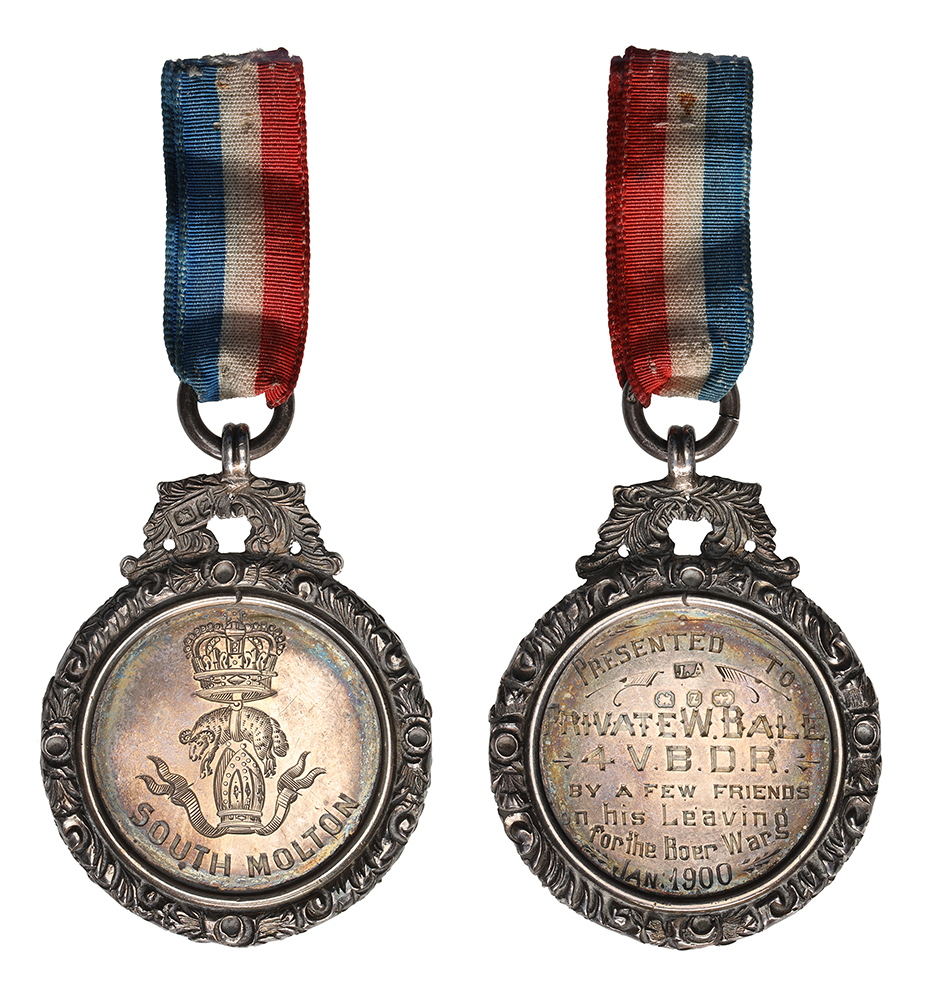 Obverse with the civic arms of South Molton: "SOUTH MOLTON".

An article in the North Devon Journal only mentions watch chains and knives, but it seems likely that the medals/pendants were given at the same time.

Note: these volunteers received a second medal from South Molton on their return (see below). 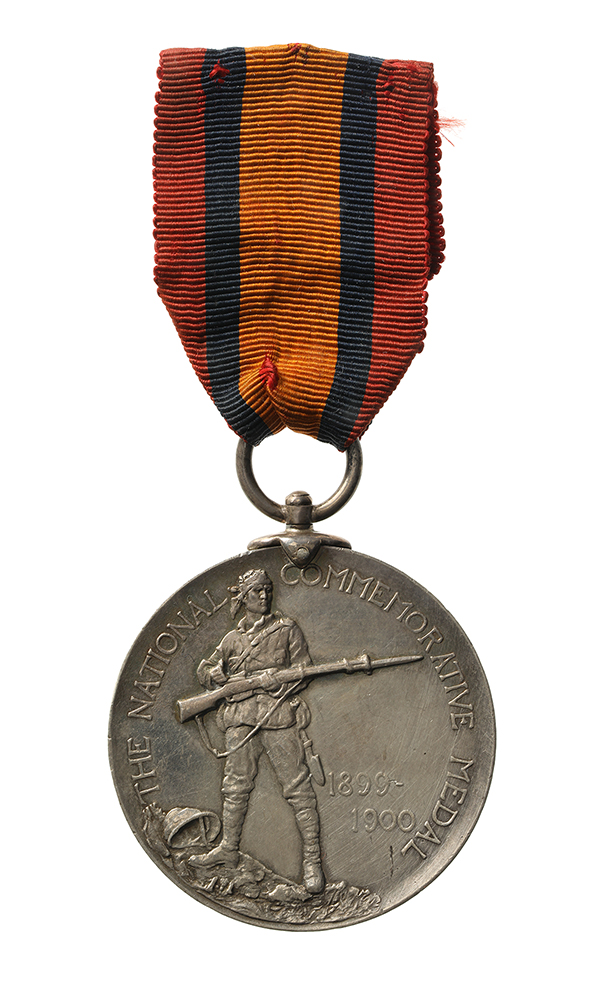 Presentation made by the Mayor (Lieutenant Fred Day), in the New Assembly Rooms.

These were edge-engraved Spink National Commemorative Medals (with suspension). 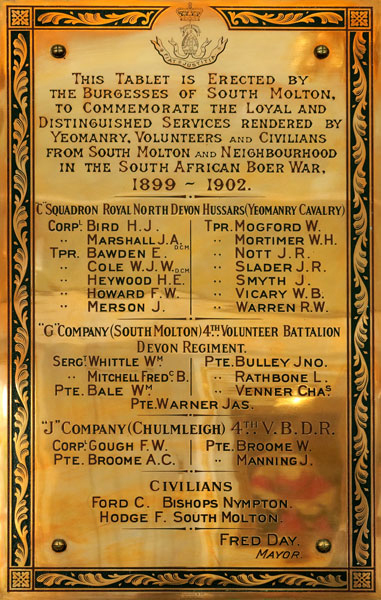 A subscription list was opened at the Volunteer dinner on Tuesday for presenting a souvenir to each of the Volunteers from the Southmolton Company accepted for service at the front. £15 was raised, and yesterday Sergeant WHITTLE and Privates BULLEY, WARNER, VENNER, and BALE received a silver watch chain and sporting knife, the balance (£11) being distributed amongst them.
North Devon Journal, 19th September 1901

A complimentary dinner was held on Tuesday evening in the New Assembly Rooms, Southmolton, to celebrate the return of about 17 of the Yeomanry and Volunteers who have been serving their country in South Africa. The chair was taken by Lieut. F. Day, of the G Company, 4th V.B.D.R. (the Mayor), who was supported by Capt. Paterson, Adjutant of the Battalion, Surgeon-Lieut. Kendle, Sergt.-Major Wells, R.N.D.I.Y., Canon Woodman, Capt. Galliford, Messrs J. Mothersdale, R.S. Crosse, J.E. Eldridge, and J. Mortimore, the vice-chairman being supported by Lieut.-Col. Hickley, Rev. J. Day, G.H. Mountjoy, W. Selley, J.S. Hodge, J.K. Kingdon, G.C. Huxtable, J. and A.W.C. Martin, E.C. Tucker, F.S. Wootton, A. Braddick, S.P. Kellard, W. Reeves, G.H. Crocker, Sergt.-Instructor Welch, and a large number of the Yeomanry and Volunteers, the Company numbering altogether about 130. The catering was excellently carried out by Mr C.F. Harris, of the Tiverton Inn Hotel, and the waiting was under the supervision of Mr Parkin, of Barnstaple. Music was supplied during the evening by the Band of the G Company, under Bandmaster E. Courtney.

Letters of regret were received from Lord Ebrington, Col. Walcot, Capt. Campbell, Capt. Las Casas, Capt. Speke, and a large number of others. The usual loyal toasts having been honoured, the Chairman proposed “The Bishop and Clergy and Ministers of all denominations”.

In responding, the Rev. James Day (Curate of Southmolton) expressed his regret that the Vicar (Rev. F. King), who took so deep an interest in the Volunteer movement, could not be present. The clergy were fighters of another kind, and he trusted that they would all do their duty.

Canon Woodman (Vicar of Northmolton), who had been Vicar of Beaconsfield, in South Africa, in responding, said he had had experience of the Church militant, for during the siege of Kimberley he had held a commission in the Ambulance Corps. The War, he thought, was inevitable, and was bound to come sooner or later, and it had done great good, for it had drawn every part of the British Empire into closer union. (Cheers).

Mr J. Mothersdale proposed “The Army, and Navy, and Reserve Forces”, which was replied to by Colonel Hickley, who expressed his pleasure at assisting in welcoming the Yeomanry and Volunteers. As one of the Regulars, he was very jealous of the reputation of the British Army; it had been said that it was very good, but very small. The South African War had shown them, if it was small, that they had a splendid reserve to draw from. He was very proud to know what the gallant Devons had done – how promptly they had responded and how splendidly they had fought.

Captain Paterson also replied. What had given him most pleasure that night was to see the good feeling that existed between the Yeomanry and Volunteers in the Southmolton district. He would like to see a further increase in the Yeomanry, so that they might be more on a level as regards numbers. He also should like to see them camp together instead of one party going to Aldershot and the other to Ashbury. He had been in South Africa and was delighted to see the splendid way in which the work there had been done. (Cheers).

The Chairman then proposed what he termed the toast of the evening, “The Yeomanry and Volunteers who have returned from the Front”. About 24 of them had gone to the Front and nearly all of them had returned safe and sound, having done their duty and been a credit to their country. They were extremely proud of them and of what they had done, and he believed if the call came again, they would again respond to the call as they had already done.

The names of those who were present with them that night were then read out, 14 of them belonging to the Yeomanry, and ten to the Volunteers, and silver medals were handed to them by the Chairman, accompanied by complimentary remarks on their arduous service, “For they are jolly good fellows” being sung by the company, standing. The Band subsequently played “The Soldiers of the Queen”.

Afterwards, Lance-Sergt. MORTIMER replied for the Yeomanry. He thanked the Chairman for the trouble he had taken and for the hearty and enthusiastic welcome they had received.

Sergt. WHITTLE replied for the Volunteers. They volunteered in January, 1900, and should they be needed again they would be ready again. He referred to the inconvenience caused to their employers by keeping their situations open so long. He thanked the Chairman for the handsome medals, which they should value very highly. (Cheers).

Alderman Bush, J.P., the vice-Chairman, proposed the toast of the Chairman, speaking in high terms of the public service rendered by Lieut. Day, and expressed his pleasure that he was taking so deep an interest in the volunteer movement. Lieut. Day replied in suitable terms.

A smoking concert concluded the evening. 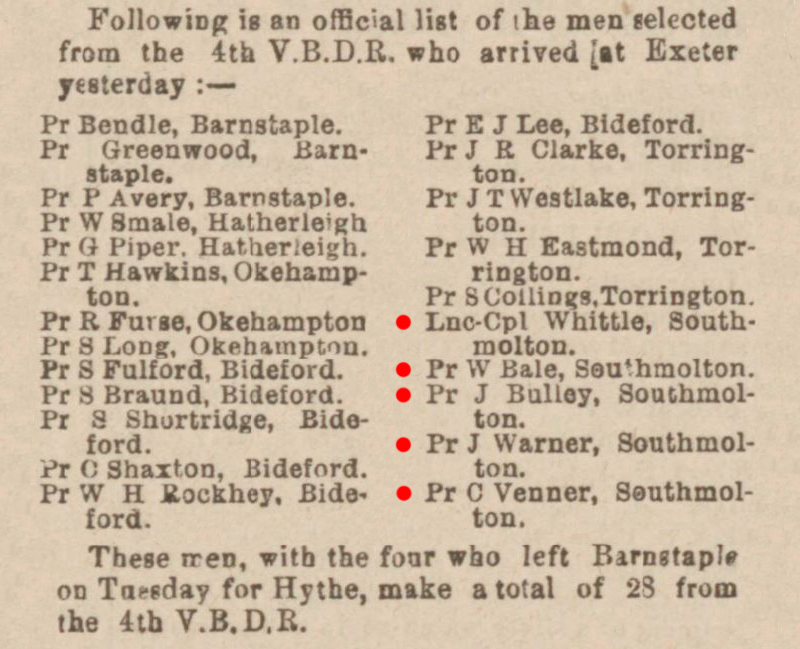