The medals were "prettily designed with two crossed guns on either side, and on the centre, enamelled in red, 'South African War, 1899-01', while at the top and bottom is a blue enamelled band with the words '4th Volunteer Battalion Gordon Highlanders'".

Arrangements have been made to give an adequate reception at Insch to the members of the 1st Volunteers Service Company who have returned from the front, namely, Sergeant (formerly Lance-Corporal) GRANT, Private ROBERTSON, and Private SCOTT. They are to spend a few days in Aberdeen with their friends, and on Thursday the town is to show its appreciation of their loyalty and devotion. The men are to be met at Insch Railway Station on the arrival of the train from Aberdeen due at 4.41 by the local volunteers, under the command of Major F.W.G. Dawson, who will accompany them to the Parish Church, where a short religious service will be held at about 5 o’clock. Then, at seven o’clock, under the auspices of the Town Council and volunteers, a conversazione will be held, at which Major Dawson will preside in his capacity of provost. In the course of the evening the returned heroes will each be presented with a gold medal, in recognition of their services, and a dance will conclude the proceedings. It may be added that the volunteers have in view to erect a brass tablet in the Drill Hall, Insch, in memory of their comrade, Private BENNET, described as one of the best fellows in the company, who died of enteric fever at Johannesburg.
Aberdeen People's Journal, 11th May 1901

Great demonstration of rejoicing took place on Thursday in connection with the arrival at Insch of the local volunteers returning from South Africa. A grand reception to welcome them was held under the auspices of the Insch Town Council for the local volunteer corps. The returned warriors are: – Sergeant Thomas GRANT, Rhynie (who since he left has been promoted from lance-corporal); Private James ROBERTSON, Oldtown, Kennethmont; and Private Robert SCOTT, Holywell, Kennethmont (who was invalided home some time ago). The fourth, Private William BENNET, Murrail, succumbed to enteric fever at Johannesburg last year, and the volunteers resolved to erect in the Drill Hall a brass tablet to his memory. By request of Provost Dawson the places of business were closed on Thursday afternoon, and a profuse display of flags and bunting decorated the burgh. On arrival from Aberdeen by the 4.41 train the men were met at the station by the volunteers in uniform and others. A procession of volunteers and the public was then made to the Parish Church, where the chaplain of the corps, Rev. John Mack, B.D., conducted a thanksgiving service. In the evening a conversazione was held in the Public Hall, presided over by Provost Dawson, who is Major commanding the local company, supported by the officers and others. In the presence of a brilliant assemblage the Chairman made an interesting presentation to the returned heroes, each of whom received a gold albert and a gold medal. The medals were prettily designed with two cross guns on either side, and on the centre enamelled in red “South African War. 1900-01”, while at the top and bottom is a blue enamelled band with the words “4th Volunteer Battalion Gordon Highlanders”. The entertainment concluded with a dance. 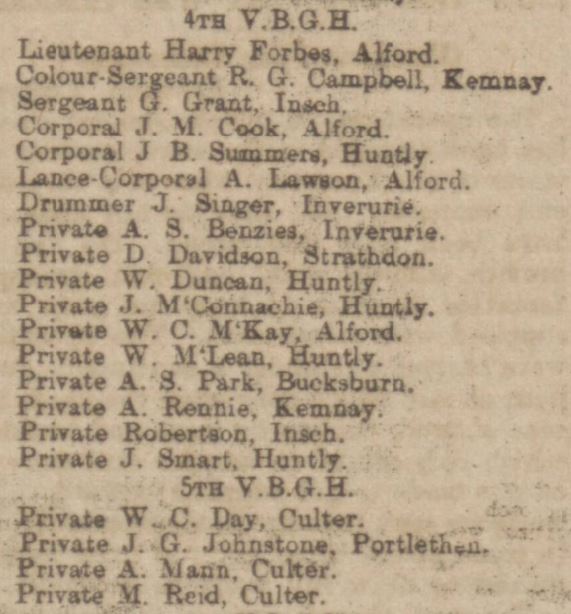