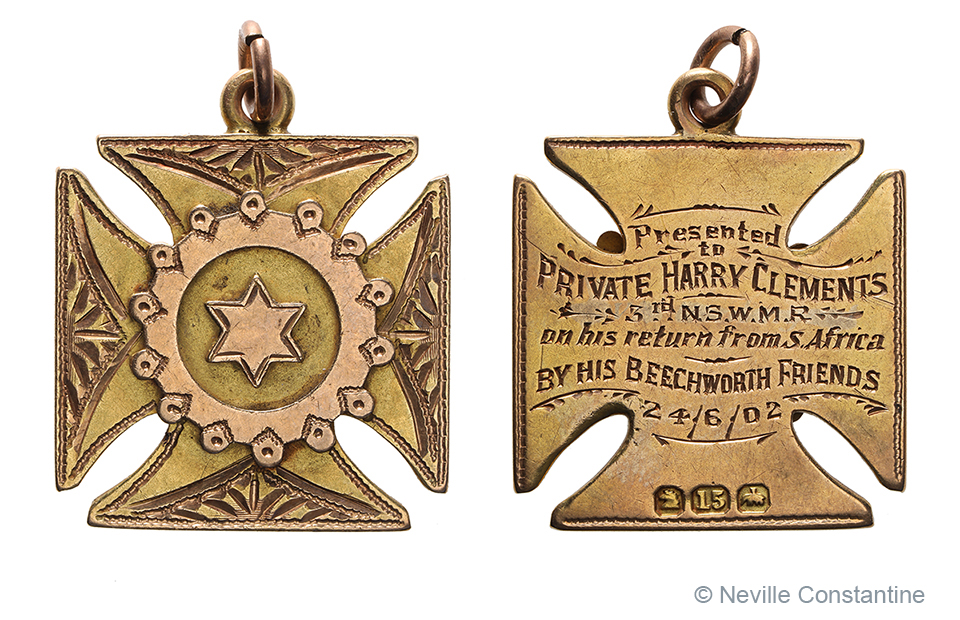 Presentation made by the Rev. Mr Porter, at Lowe's Star Hotel, Beechworth.

"They could not do very much for their returned soldiers, but in the pure gold of the medals they wrapped their goodwill for them, hoping that they would serve as mementoes of tbe time they spent in South Africa, and of the welcome that greeted them upon their return".
Sergeants GAMBOLD and BARTON, and Privates FLETCHER, CLINGIN, SOUTHERN, DUELL, and PAYNE were all reported to have returned to Beechworth some weeks ago. I have found no reports of Beechworth presentations to Gambold, Barton, Clingin, Southern & Duell. However, Barton received a medal from Myrtleford.

Clements example in the Constantine Collection.

The large banquet hall at Lowe’s Star Hotel, Beechworth, was filled with a large and enthusiastic assemblage of representative townsmen on Tuesday night, when a reception social was tendered to Trooper Harry CLEMENTS, the last of the Beechworth soldiers to return home from South Africa. Host Lowe had prepared a magnificent spread; the tables and beautiful decorations being greatly admired. Mr A.A. Billson, M.L.A., presided, and Mr John Armstrong occupied the vice-chair. The guest of the evening (Trooper CLEMENTS) sat to the right of the chairman, and Sergts. GAMBOLD and BARTON, and Privates FLETCHER, CLINGIN, SOUTHERN, DUELL, and PAYNE, who were all welcomed home a few weeks since, were also present as honoured guests.

The Chairman said, at the outset, that he had accepted the position of chairman with feelings of very great pleasure. They had assembled for the especial purpose of giving a very cordial welcome home to one of those brave Australians who had freely and voluntarily offered themselves for service in South Africa. It was with more than an ordinary degree of pleasure that he asked them to drink the health of Trooper Harry CLEMENTS and convey to him their warm appreciation of his response to the call of duty to defend their sovereign and the empire.

He and Trooper CLEMENTS’ father had been friends since childhood, and were a time of stress to come he would turn for assistance to Mr John Clements as soon as to any man he knew. Trooper Harry CLEMENTS, in common with all others who left our shores to fight in South Africa, would have reason to look back with pride and satisfaction, and their parents would have reason to look back with pride and satisfaction also. The war was pregnant with great possibilities when they volunteered. Every great nation had for years looked with envy at the growth of the British Empire, and when the war started they hoped to see Great Britain broken and discredited and, if that had taken place, would no doubt have drawn Great Britain into some great struggle, the end of which it was beyond the wit of man to see, but the liberty of Australians now enjoyed would have been assailed in that event, their country invaded and their homes and hearths invaded. Consequently Trooper Harry CLEMENTS could remember with pride the part he played in the great event, and the support given Great Britain by her dependencies was an object lesson to every part of he world. It was a splendid realisation of the sentiment expressed by the poet Watson –

To whom the mother in her need Perhaps, some day may call!

Australia’s sons did not wait for the call. As the Secretary of State recently said, this was the first practical expression of kinship which the late Queen was so anxious to foster, and which he believed the visit of the Duke and Duchess of York tended to promote. An honour had been conferred upon every part of the Empire which sent men to take part in this struggle, and he would like the returned soldiers to understand that they all appreciated to some extent the honour that came down to them from their special labours. He asked them to drink the health of Trooper Harry CLEMENTS, and other returned soldiers. (Applause).

Trooper CLEMENTS, who was received with cheers, asked to be excused for not attending in uniform, as he thought he would have no further use for it and had thrown it away. (Laughter). Speaking was not in his line, but he would thank them all most kindly for the reception that had been given him. (Applause).

Mr Hans Susemiehl, who had been the principal worker in arranging this reception, said he had esteemed it an honour to be connected with such a gathering, and mentioned that the Rev. Mr Potter would present the returned soldiers with medals.

The Rev. R.H. Potter, M.A., after some highly complimentary and humorous references to the previous speaker said that he was a man of peace, who at the same time recognised that they sometimes had to fight. They did not wish to fight, “but by Jingo if we do” the Australian boys would show them how to do it. As an Australian, he was proud of his fellow Australians who had carried the name of the Australian nation to South Africa and there made it known to the world as it was never made known before. War was one of the horrible things to be gone through in this world, and they were proud of the way in which Australians had answered the old country’s call and fought for the good old flag and empire. (Applause). They could not do very much for their returned soldiers, but in the pure gold of the medals they wrapped their goodwill for them, hoping that they would serve as mementoes of the time they spent in South Africa, and of the welcome that greeted them upon their return. (Applause). The reverend gentleman then handed the beautiful gold medals to Privates CLEMENTS, FLETCHER and PAYNE. Private C. MAHY being absent.

Mr Martin Mahy responded for his son, Private Chas. MAHY, who is in England with the Australian Coronation troops. …….

……. Private Gordon FLETCHER, who was received with applause, responded. He had on behalf of his fellow soldiers to return their sincere thanks. While on active service they had some hard things said about them as to the disaster at Wilmansrust, but, ultimately they were complimented on the manner they came out of it. General Beatson had an affair which only lasted five minutes, whereas theirs lasted 20 minutes in the dark. In the last seven months they were under Colonel Pulteney, and he believed they acquitted themselves very well against a redoubtable foe, General Louis Botha. (Applause).

Private W. PAYNE also returned thanks for their kind invitation, and felt deeply sensible of the honour conferred upon them. (Applause).